I haven’t seen the movie

yet, but it seems to be turning into one of those movies you just HAVE to see. It’s a feel good story about ‘Murica. Mark Wahlberg plays Marcus Lutrell, the lone survivor of a Navy Seals special operations mission that goes wrong in Afghanistan. Well, he was on CNN recently with a reporter named Jake Tapper. It got ugly pretty fast. Instead of just asking Lutrell some questions about what it was like to live through that, he called everything that Lutrell did “senseless” because he doesn’t believe the war in Afghanistan is one that we should be fighting.

Newsflash dude: most of us don’t agree with that war, including TurtleBoySports, since this is a family blog. But nobody wants to hear you spout your opinions to this guy. Just let him talk about his experience and call it a day. Well apparently ultra-liberal CNN correspondent John Aravosis felt the need to just start whaling on Luttrel today to his 11.5K followers. He decided that it was appropriate to call this American hero a “rude jackass” amongst other things. And Luttrell didn’t take too kindly to it. Here’s how it went down: 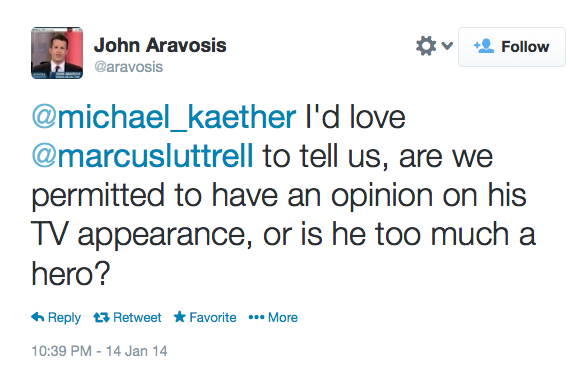 Momma always said, stupid is as stupid does. This guy just redefined what Forrest Gump was talking about. Hey John, hate to break your balls on this one, but there’s absolutely nothing political about this movie or this guy. Chances are he probably votes republican. God forbid. But maybe you could just give him a pass for this unforgivable sin this one time? After all, he nearly died defending our freedoms from people that would like to kill all of us.

This is what I despise about politics. You take this perfectly amazing story that every normal person out there can agree is something that Americans can rally behind, and you hijack it and turn it into something political. Look, this guy in no way represents 99% of liberals, so don’t think this is some shot at the lefties. But he happens to be a liberal and he happens to be a giant dooshnozzle. This is why people don’t vote dude. Because nobody wants to turn out to be a huge meanie like you. Some people just wanna live their lives, watch a good movie and call it a night. Then you have to go ruin it with politics.

There are good conservatives and bad conservatives, just as there are good liberals and bad liberals. Anyone who tries to politicize a tragedy falls into the bad category. Anyone who has their mind made up about something before they give it a chance falls into the bad category. This guy fits both those criteria. He thinks anyone dumb enough to join the army is a brain dead southern hick that hates the gays and loves to shoot anything that moves. There was no way he could like this movie because it glorifies someone in the army, fighting in a war that he doesn’t agree with. This makes him a giant fraud. 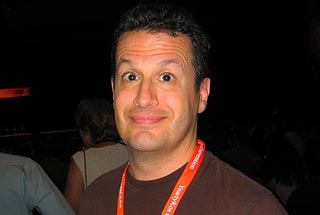 And yea bros, nice move retweeting a bunch of idiots who swore at you. Because only people on the right say vile things like that on the internet. Hey dude, I can go and find a million hateful things on the internet right now. Know why? Because it’s the freaking internet. So you mean you found people on the INTERNET that say bad words to you? No way, I won’t believe it unless you retweet it dude. I just can’t believe human beings would say mean things on the INTERNET!!

Perhaps the most surprising part of this whole thing is that somehow John Avarosis has a wikipedia page. I thought only important people got one of those, but apparently he qualifies. Nevertheless we had a little fun with it. How long do you think this can stay up there before being taken down?

I give it 24 hours, so let me know if I get censored people. Here’s the link.