For months now people have been messaging us about this douche twinkie: His name is Dylan Costello, a local slugpump from Quincy with the “disease” that makes him scam everyone and their mother on the south shore. And I mean the ENTIRE south shore. There are very few communities in which he is not well known at this point, as the guy who pretends to be an army veteran who whores himself out as a licensed contractor. He claimed he opened up a “business” (he didn’t) and has been doing contracting work for 15 years, even though he appears to be no older than 25. There’s nothing his imaginary business can’t do either. From landscaping, to painting, flooring, to masonry…. He even pretends to have a “crew” that will give you “same day service.”

Is there anything this boy wonder can’t do? You’ll notice that his name is greyed out in several of those groups because he’s been banned in almost all of them. He purports himself to be a respected member of the community by offering discounts for veterans and first responders. You’ll also notice that he has a different phone number to call every time he posts, which totally isn’t shady at all.

Nevertheless he still manages to steal a lot of money from people by pretending to be a good ol’ boy from Quincy, and a young and loving father looking to provide for his child. Except this is what he does to people: Most people generally have the same story. He solicited them in a community page, came over and gave an estimate for whatever job they needed done (he can literally do anything), then he asks for around 20% up front, tells you he lost the check so you’ll write another one, cashes them both, and then you never see or hear from him again because he has so many burner phones.

In fairness, take a lap if you fell for it. If you took five minutes out of your day to research this boob, or just put your thinking cap on, then you’ll see that this doesn’t pass the smell test. But he preys on people who aren’t that skeptical and want to support a “veteran,” from Quincy raising his crotch fruit and contributing to the local economy. And please, spare me your “it’s a disease” nonsense. This shitwad is diabolical. He’s not out snatching purses like a respectable junkie. He’s using social media to repeatedly prey on the elderly, disabled, and others who are more likely to need help and be trusting.

He jumps from town to town so it’s hard for the cops to find him, and he’s in and out of jail. He reemerged last week with a Super Bowl special. But he’s got a new trick up his sleeve this time. A girlfriend/partner. And she’s added a new twist to his scamming repertoire – dog flipping. Last week they “rescued” a doberman named Sasha. Then the other day she posted that same dog for sale on Facebook, claiming the dog could be used for breeding, and saying that she was selling the dog because her landlord wouldn’t let her have a dog. 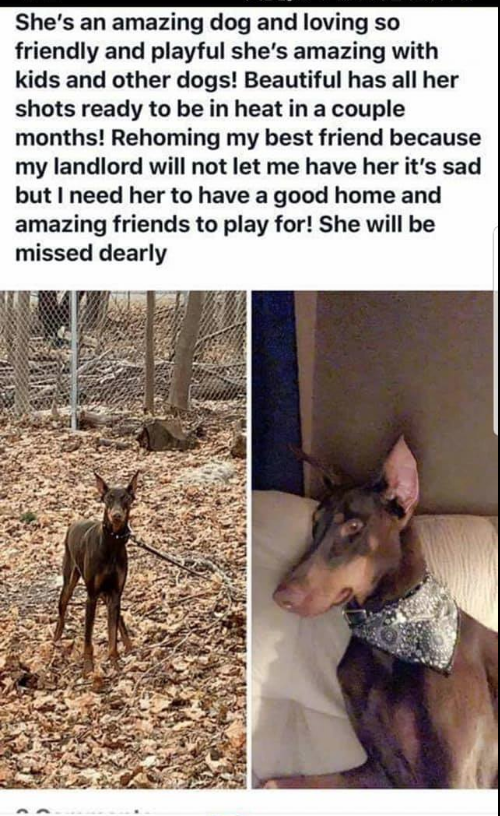 She said she got the dog from a rescue on February 4. Rescue dogs are always neutered and can’t be used for breeding. And obviously she didn’t get a new landlord in the last week who suddenly decided that this dog she loved so much couldn’t stay with them. It’s one thing to scam people by pretending to do work you have no intention of doing. It’s another thing altogether to do this to innocent animals. Of course Dylan is just using this girl because he’s too notorious for anyone to take him seriously, and he’s banned from all the groups. She doesn’t have that problem. Yet. But she seems like a more than willing partner in crime. Plus, anyone who would ever willingly play bury the broomstick with this chud Has questionable moral character to begin with.

Then again, this is Mom: “That’s my baby. Good,bad,indiffent.ill always have his back.No Matter how much HE FCK s up.he is starting to take the heat.he can be a angle when he wants.nows e time”

Oh he’s got an angle alright.

When your own mother has to preface everything she says about you with, “No matter how much he fucks up,” you know you’re a loser. And please, for the love of God, can someone tell Mom that you have to hit the space bar after you use a period? Oy vey.

quincy has some grimy ass people in it #hoes

bitch you are not going near my fucken kid!#slut #joke

Quincy does indeed have some grimy people in it. Starting with you fat boi.