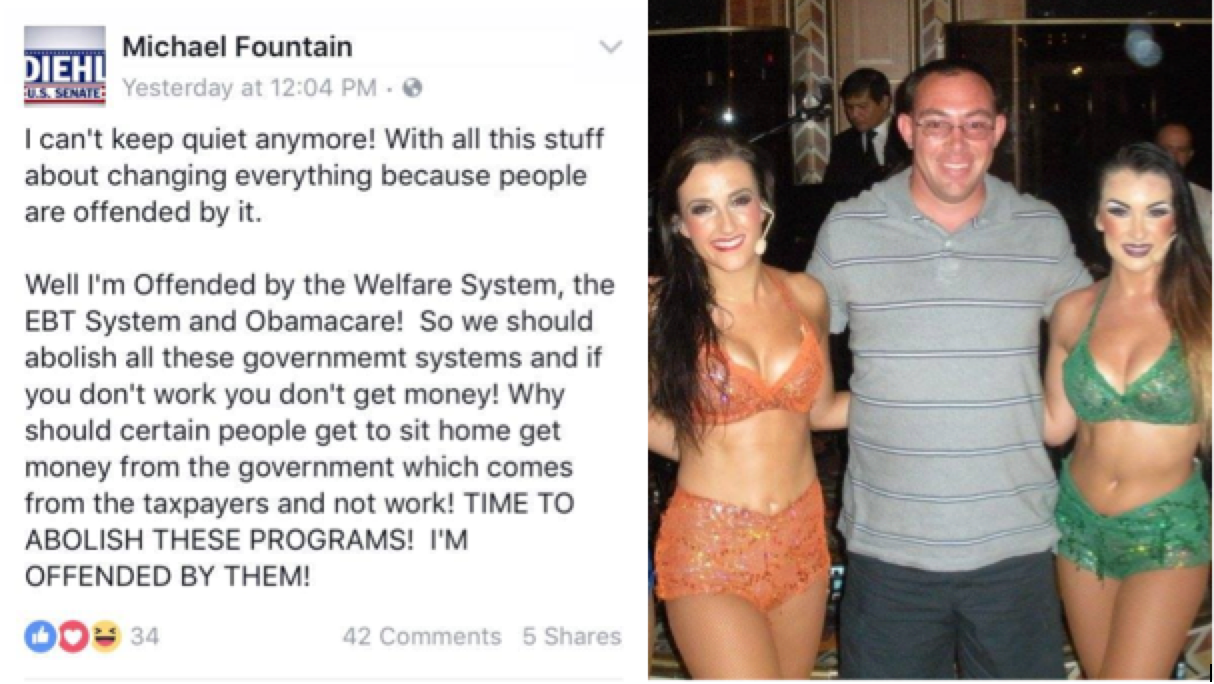 The only thing more ridiculous than that post is that shirt. FACKS!

As you know from our weekly Food Stamp Friday blog, we are well-versed in exposing people who are committing food stamp fraud openly on Facebook.

But that doesn’t mean we’re against food stamps, welfare, and government assistance altogether. We just think it could use some more oversight because obviously many who shouldn’t be on food stamps are collecting them anyway.

Hey Michael Fountain – just let us do the talking. You’re not good at this. You sound like a moron. Trying to intertwine welfare abuse to SJWs taking down statues is literally the dumbest analogy I’ve ever heard.

And when you say that it’s time to “abolish these programs.” Don’t get me wrong, I get where you’re coming from. But there’s tons of people who get government assistance that any rational person wouldn’t object to. Ya know, like the disabled, single mothers working low wage jobs, the elderly, the mentally handicapped, and many more. These people aren’t sitting at home collecting from the taxpayers because they’re lazy. They’re doing it because they can’t walk, or they’re sick, or because as a society we’ve decided that children shouldn’t starve because their parents made a series of poor life decisions.

Here’s the best part about this chud – his work history: Dude, you’ve been sucking off the public tit your entire life!!! You worked for the Mass Pike as a toll collector!! There has never been a job that is a bigger waste of taxpayer money than a toll collector on the Mass Pike. You sit there, rob people, and then hand that money over to the state. Not all people though – just people who travel east-west. Because there’s no tolls on 95, 93, 493, or Rt 3. Oh, and to become a toll collector you have to know someone. Because those slugrakes got paid six figures a year to sit in a booth, act surly, and take their sweet ass time handing back change.

Funny that the second this guy loses his cushy job as a toll collector he moves on to the only place that employs more miserable people who do their jobs even slower – the RMV. Anyone who works at the RMV while ranting about government waste and can’t see the irony of how stupid they sound, probably shouldn’t be running a local town government. Although it is Ware, so it kind of makes sense now.

See that? That right there is why Ware looks like this: Because instead of their leaders doing something to make their town look less like a scene out of the Walking Dead, they’re writing rants about abolishing gun laws while using random capital letters wherever they see fit.

And this quote will no doubt go down in the annals of history: Wait……what? I thought he was being facetious about getting rid of all gun laws. Turns out he views these as “things that really need to be changed.”

Then all of a sudden he changed his plan. He no longer wants to get rid of public assistance altogether, he just wants to abolish it so he can restart it again: Step two is restarting the program all over again and assuming the people committing “F”raud, “A”buse and “W”aste will no longer sign up to receive benefits.

Or instead of doing that you could just hire a couple people like Turtleboy to keep their eye out for abuse, and then cut people off who are openly abusing the system. Whatever you think is easier Mike! Yup, he said it. “It is not the publics responsibility to pay for your shortcomings regardless if it’s just the simple fact that you feel entitled or you’re lazy or if you have a disability.”

Fuck all you disabled people!! Stupid bums should get out of your wheelchairs and get a job!! Can’t you call up your parents and get a job as a toll collector like Michael Fountain? Michael Fountain should “run for Washington.” Because that’s a sentence that makes sense.

Anyone remember when we wrote about Steven Fisher in May? As you can see, he’s a guy that’s got life all figured out. And he wisely thought he’d do an interview with Dianne Williamson about why he called President Obama a monkey on Facebook:

Oh yea, this is the kind of guy you want to have your back. Keep in mind his background:

You can’t make this stuff up. He’s literally getting paid by the state be a loser who lives with his parents. But he’s totally against those lazy free loaders in wheelchairs collecting assistance from the state.

The best was when he was asked if he was a racist:

And then he shared his thoughts on Obama’s Muslim faith and what Trump is gonna do about it:

Yup. This is the what your supporters look like when you say you wanna completely dismantle the SNAP program.

Other people picked up on the obvious hypocrisy at least: Not sure if Michael Fountain ever will.

The bottom line is that there is fraud and waste when it comes to government assistance. The far left sucks because they want to pretend it doesn’t exist and call any attempt to regulate it “demonizing the poor.” Far right wingers suck because they oversimplify it while completely ignoring the fact that most people who collect from the government are not abusing the system. This is why you read Turtleboy. Because we’re the voice of reason in a sea of extremism on both sides.