So the big news today is that U.S. Attorney General Eric Holder announced that the federal government will seek the death penalty against Dzhokhar Tsarnaev. This might be the first normal thing Eric Holder has done since becoming the AG. It’s just such an obvious call. Anyone who thinks he shouldn’t get the death penalty is just a delusional idiot. I mean, come on people!! I’m wicked liberal when it comes to the death penalty. I have always opposed it, and will continue to generally oppose it in the future. I think it gives juries too much power to arbitrarily decide who lives and who dies. I think it unfairly discriminates against poor people who can’t afford good lawyers. I think rich people who commit the same level crimes would never get the death penalty because they can afford better lawyers, and that’s just not real justice.

In this case even a pinko like me can clearly see that this jackass has to go. The kid is a vile piece of human garbage. He came from a war-torn, shitbox country, and came to the land of the free and the home of the brave where he was welcomed with taxpayer funded public schools, welfare, and college scholarships. He grew up in the socialist paradise of Cambridge, where radical nutjobs like him and his idiot brother were welcomed with open arms simply because they were different and had accents. And how did he show his gratitude? By killing women and children. I don’t believe in the death penalty, but this idiot needs the death penalty like no one has ever needed it before.

I just assumed this was common knowledge. Then I turned on the news, and they were interviewing some local bleeding hearts from the Back Bay, inquiring about their opinions. Check out this lady’s response:

This lady is the reason why Massachusetts is a giant joke to every other state in the country. Even Alabama is laughing at us. Ala-freaking-Bama!!! You get on the news, and the only thing you have to say about the terrorist who intentionally killed a cop, two women, and a child, not to mention shutting down a major city for 24 hours, and the only thing you have to say about him is, “I’d hate to see him killed”? Lady, what are you smoking out there in the Back Bay? Why would anyone HATE to see him killed? What on earth is there to like about him? Will you miss him? Unless her reasoning is that she wants to keep him alive so we can torture him on a daily basis, then she’s a complete moron.

More than likely she’s just another one of these idiots who gives liberals a bad name. Being a liberal isn’t a bad thing. It means you care about poor people and you wanna stick it to Wall Street fat cats. If you wanna be a good liberal and stand up for someone who deserves your efforts, then stand up for some nice old lady in Roxbury who’s getting stiffed out of her medicaid. Being a liberal doesn’t mean that you have to stand up for terrorists. Just stop. You make decent, hard-working liberals look bad.

Then there was this nudnik:

So this lady is apparently very confused about her religious beliefs. First she says you “don’t take an eye for an eye,” which basically means she thinks the Bible is bunk. Then she says, “Only God can judge.” Well which one is it lady? You just quoted the Old Testament. In the Old Testament, God isn’t a very sympathetic person. When he gets mad he just floods the Earth and makes you live in a whale’s belly for three days. Gotta love her logic though – only God can judge a person’s punishment. Guess that means we should close all the jails and send Jafar back to Cambridge. After all, God didn’t judge any of those people yet. I mean we were all waiting anxiously for him to walk into the courtroom and bang his gavel down a couple times for order, but he never came. Must’ve been taking a divine dump in his chambers.

But by far the biggest idiots, as usual, have been the instigators at the ACLU. Look, fundamentally I am a HUGE fan of what the ACLU stands for. At least what they’re SUPPOSED to stand for. They used to fight for free speech rights and the right to learn about evolution in school. Now they just wanna ruin Christmas, make us pay for prisoner’s to have sex changes, and stand up for terrorists. Here’s the press release from the ACLU today: 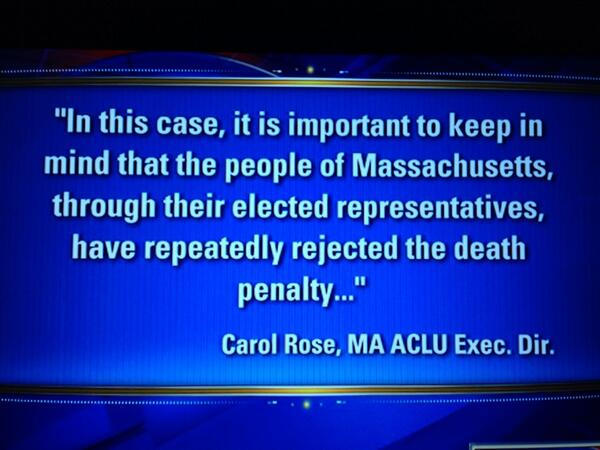 Hey Carol Rose, no one asked you what you thought. Take a lap. The Massachusetts State Legislature voted to get rid of the death penalty in STATE cases thirty years ago. This is something called a FEDERAL case. Ya see, even if the idiots in the videos above are delusional enough to elect leaders who believe that Jafar should be spared his life (even though he spared no one’s life), they are vastly outnumbered in this country by people with common sense. And FEDERAL, implies that this case belongs to the people of the United States, not the Marxists of Cambridge, Massachusetts.

My beef with the ACLU is that they defend jagoffs like this instead of decent people who could actually use their help. For example, last year the Worcester City Council passed an ordinance banning pan handling. Best day’s work they’ve ever done. Anyone who has ever gotten off at the Kelly Square exit has had the awkward encounter of being stuck at that light directly next to a bum holding a sign who knocks on your window and then yells at you when you don’t give them your money. 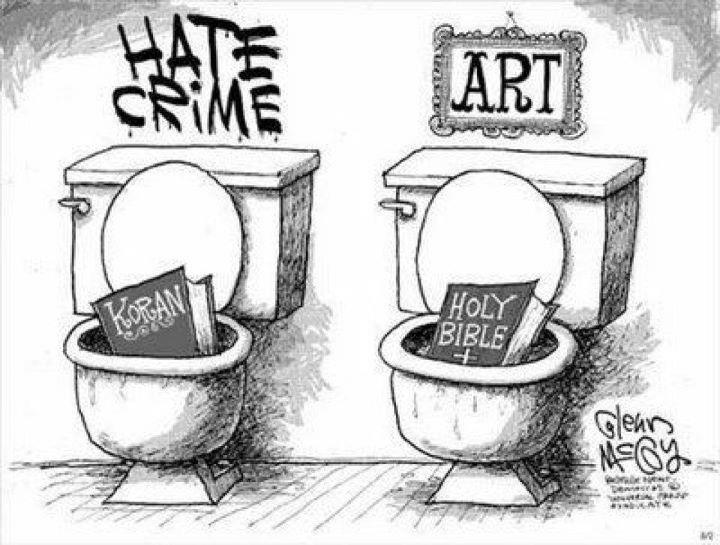 So of course the ACLU, and local  School Committee member Tracy Novick field a lawsuit in Federal Court saying that crackhead bums standing in traffic harassing you for your hard earned money is somehow protected free speech. They constantly go after cops too, so it’s not surprising that they’re standing up for a cop killer now. Did I mention that they are bitching and whining about Aaron Hernandez’ lonely conditions in isolation while in prison?

But where is the ACLU when decent, honest people need them to be their voice? How about the fact that school districts all over the state have social networking policies that allows school districts to monitor their speech and terminate them if they’re seen holding a beer on Facebook? You’re cool with that ACLU? Where were they last week when that teacher in Fitchburg was suspended from school for posing in her birthday suit? I mean, why stand up for public school teachers when you can stand up for terrorists, murderers, and bums? How about you stand up for free speech, the most essential civil liberty we have? But that wouldn’t get enough headlines right? I mean, why do the right thing when you can profit off terrorists?