A lot of people have been asking me how court went with Bootleg Avenatti, AKA Manchester Attorney Robert Fojo, who was attempting to get a restraining order against me. I was surprised since court was 11 days ago and we still hadn’t heard back from the judge. I never blogged about it because I did a YouTube show instead. That’s just how things are gonna work around here now because it’s much easier to do a show then write a blog, so make sure you subscribe to our YouTube channel by clicking here.

Obviously this whole thing was a huge joke, since he wasn’t in fear for his life, contacted me first with a threatening email on behalf of his deadbeat client, demanded that I take a blog down because it hurt his feelings, and then played the victim when I called him back and made fun of him. I’m shocked Judge Messer didn’t rule on it in the courtroom, and that attorneys like this are taken seriously in New Hampshire. With that said, he brought 12 “exhibits” with him: 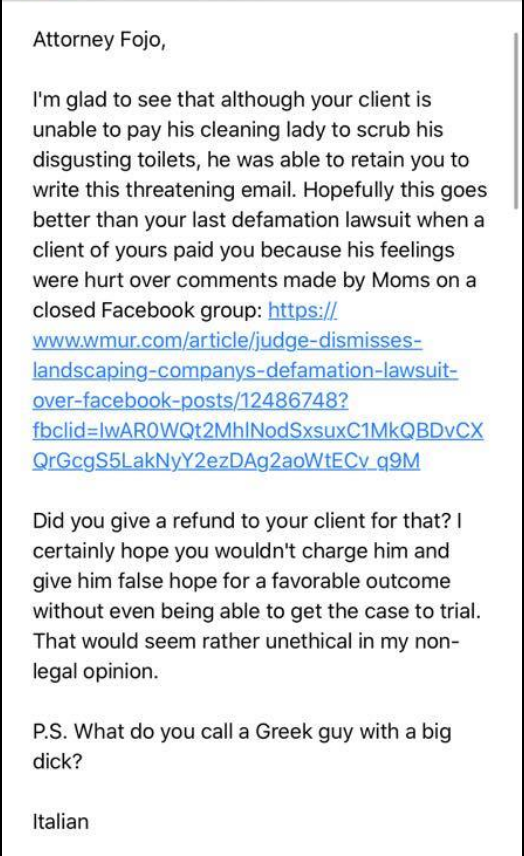 It took everything in me not to laugh in this guy’s face as we sat in the courtroom forced to testify while wearing masks. The whole thing lasted an hour and a half and he rambled on about how I use (gasp) fake Facebook accounts and how I’m always being sued.

He played voicemails in court from people who prank called me, but there were no threats in any of them. Nor were there threats in any of the comments or messages he received. I showed the judge several of his comments, including this one in which he mocks me for being irrelevant, and makes fun of turtle riders for wanting to masterbate in peace, in order to prove that this man isn’t the least bit scared. Quite the opposite, he was the aggressive one. He even sent his goon boy boy Mitchell Fleming to come after me, and sent threatening messages to a Manchester bar employee for sharing a blog about Fojo. This didn’t help either. The cruz of his argument was that although he never told me to stop messaging him, and his social media was wide open, and he contacted me first, he was in fear for his life because third parties contacted him after reading the factual blogs about him. And I was responsible for this because I said, “DO NOT CONTACT HIM,” which he claims is a dog whistle for “contact him.”

This is idiotic obviously and a competent judge would’ve just told him so. But Judge Messer let this loser rant and cry and then I had to explain to her that the alternative to saying, “DO NOT CONTACT HIM,” was “CONTACT HIM,” thus putting me in a position where I’m guilty no matter what I choose to do. She told me I could say nothing at all, which is dumb and embarrassing for a judge to say in an open court room, since the First Amendment allows me to say what I want.

After court he filed another bogus motion claiming I committed perjury, which was laughable. He must’ve contacted Bristol Blarney because she knew about it in five seconds and kept using it to deflect from the fact that DCF took two of her crotch fruits from her.

Anyway, the judge finally got around to ruling on it today in a six page response. Spoiler alert – I’m still undefeated in court. TL;DR – Everything that was stated was protected speech, Attorney Fojo could’ve blocked anyone who commented on his page but chose not to, and she doesn’t believe he fears for his life. RO denied. The part at the end about a “different outcome” if I continue to blog about him is obviously bullshit too. She claims that the First Amendment doesn’t protect all speech, which I’m well aware of after defeating countless libel lawsuits in court as well. She points out that speech that is libelous or intentionally incites lawless action of others isn’t covered. I must’ve missed the part where I did either of those things. I’m hoping for her sake that she just had to throw that in there to make him feel like he got a fair shake and she gave me a stern talking to as well.

Here’s my question – where did Mitchell Fleming go? Thought I was gonna get destroyed?

Looks like your idiot lawyer friend is completely full of shit, routinely takes on cases that have no shot at going anywhere, but because you secretly wanna jump his bone you assume he actually knows what he’s talking about.