You would think that after Marc Bertrand literally laid siege on the MIAA for their shenanigans in the last few days (Beverly cigar-gate, Methuen/Chelmsford SAT-gate) they’d be a little bit apologetic, or at least try to smooth things over. Apparently though the NRA had more tact with their “more guns” solution after the tragedy at Newton CT.

They are not sorry at all. As a matter of fact they are more steadfast than ever. Never has that been more evident than this interview in which ESPN’s Christian Bradley interviewed MIAA Associate Executive Director Richard Pearson. Because life simply could not go if the MIAA did not have an Associate Fucking Executive Director. After all, having a giant asshole head your fraudulent organization isn’t enough. They need an assistant. For the record I’ve been saying that the head executive gets $138,000 a year. I was wrong. Bill Gaine retired last year, and that was his salary in 2008. The new ED is Richard Neal, who made a grand total of $213,290 in 2013. Here’s the MIAA’s tax return. Is it a coincidence all of these guys are named Dick? That’s a lot of money to be a giant asshole.

Dick Pearson according to this tax return made a little under $60K. But that’s because this was pro-rated. The OTHER associate director Sherry Bryant made around $118K, and Assistant Director Peter Smith made a paltry $80K.

Their salaries are financed by you as a taxpayer, you again with the user fees you use to pay for your kid to play sports, and you again for the $10 privilege of watching your kid perform. And what do they do for you? Nothing. Because they don’t give a fuck about you. They care about buying their next home down the Cape.

Chris Gasper of the Boston Globe appeared on Felger and Mazz the other day, and reported that he has been charged to cover games for the Globe. You got that? The MIAA makes the media from a major American newspaper pay for the privilege of giving their organization positive exposure.

In Christian Bradley’s interview with the Dick Pearson, the MIAA passed the buck onto Methuen and Chelmsford for the conflict with the SAT’s. Bradley asked him what he had to say about the criticism the MIAA has been getting because of that game. His response was that playing the game 5 days ago instead of yesterday “could possibly jeopardize the tournament if rain came in and we wound up having to play back-to-back games.”

Ya got that? Having the game four days earlier could potentially make them run out of time to hold all the games. Because that makes a shit ton of sense. Oh yea, and it might rain. Maybe.

The MIAA is hiding behind the weather instead of taking accountability. That’s why we’re paying them all over $100K a year – to hear them blame the weather that MIGHT come.

Bradley is another example of a reporter who doesn’t know how to do his fucking job. Instead of grilling him and forcing him to answer hard questions he kept lobbing him softballs. At no point in the interview did Bradley ever once ask him the most important question – was this done to increase gate receipts? Because that’s what this all comes down to. Methuen Athletic Director Jim Weymouth claims that this was the reason he was given. But for whatever reason Bradley decided not to ask THE MOST IMPORTANT question. Dude, you write for a major news outlet. You have this scumbag at your mercy. Make him admit that the primary motivation for the MIAA is money and not students. That’s your fucking job as a reporter.

Bradley asked him why they scheduled a game during the SAT’s, Dick Pearson’s response was

“Many athletic directors try to warn students about potential conflicts with SAT’s and The  College Board. The College Board schedule is their own, our association and member schools want us to run a two or three week tournament for kids and give them the best options – those two things may run into each other a little bit.”

Oh I see. So it’s the SAT’s fault for scheduling a vital test during a baseball game. Got it. Now at this point a real reporter would interrupt Dick Pearson and point out that the SAT’s are only held every couple months, and that SURELY the MIAA could have accommodated this test.

Or perhaps Bradley could’ve asked Dick Pearson how they can justify collecting six figure salaries while being UNABLE to come up with a simple rescheduling solution? Because although Pearson has a plethora of excuses, he was unable to actually find a solution. In a place called reality you are paid money to get shit done, and they’ve done absolutely nothing. But Bradley didn’t ask those questions because he’s an ESPN hack. 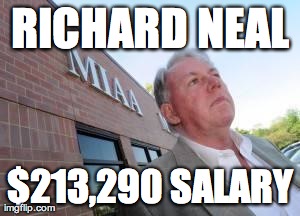 “All requests will be addressed sensitively and fairly.”

If Bradley were competent he would’ve asked Dick Pearson how the fuck the MIAA’s ruling was, 1) sensitive, and 2) fair? Because I’d love to hear his answer. Or how about he ask him how the MIAA “assessed extenuating circumstances presented.” Because from where I sit it appears as if all the MIAA did was blame a hypothetical thunderstorm that may or may not happen before ultimately saying “skip the SAT’s or skip the game.”

Bradley asked him about the prospect of having Chelmsford and Methuen play Sunday and have the winner play Andover that same day as part of a double header. His response was priceless:

“I also think it is important for us as an association to show our students in the best possible light. We now have this beautiful opportunity to play four games at LeLacheur Park with some of the best athletes in the state of Massachusetts. Why not showcase it if we can pull it off? Outside of the SAT conflict, which I certainly am not trivializing, we were able to do that for the kids.”

Oh I see, he wanted the MIAA to show off the home of the might Lowell Spinners. Got it. Because “showcasing” the athletes at a baseball field is what high school athletics is all about right? You can’t have them play at a sandbox in Lynn. That’s not “showcasing.” Of course Bradley never followed that up with a question like, “so let me get this straight – your primary motivation for not moving the game time was to play at a more attractive field? Is that right?” Because that’s what a REAL fucking reporter does. 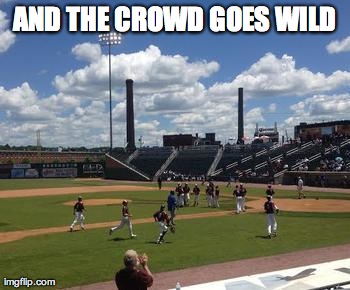 And how come he didn’t call him out on that last statement. Pearson said he’s “not trivializing” the SAT’s. What the fuck does that even mean? Yes you are Dick. That’s EXACTLY what you’re doing. You’re making the kids choose between a baseball game and taking the test. That’s the definition of trivializing it. Once again, you have have failed us all Christian Bradley with your lack of follow up and cold takes.

Dick Pearson also tried to compare the SAT’s to other events:

“What goes into the tournaments is trying to accommodate many athletes at many schools in many different situations -– whether that be graduations or proms.”

Newsflash – SAT’s are infinitely more important than graduations and proms. Graduations are a celebration of the accomplishment of not dropping out of high school. You’re receiving a diploma alongside a gaggle of kids who got D’s and passed the MCAS on their third try. And proms? LOL. Any baseball player who would actually feel conflicted between choosing the prom or a semifinal baseball game isn’t the kind of guy we like to stand up for at Turtleboy Sports.

I wouldn’t have a problem with the MIAA scheduling a game during proms and graduations. There’s a million of them and they’re not something you HAVE to go to. But SAT’s? Those happen three or four times a year and they’re on the same exact day statewide. Kids MUST take those if they want to go to college. It’s the easiest fucking thing in the world to schedule around. You never schedule a game during SAT’s. Period. Pretty fucking simple Dick.

Look people, we’ve said it before and we’ve said it again. There is only one place to come for actual hot takes, and that’s Turtleboy Sports. Don’t bother with ESPN because you’ll get stale interviews like this. Don’t bother with Barstool because you’ll get some 50 word bro-take followed by a bunch of racist comments from anonymous 18 year olds. We started this blog because stooges like Christian Bradley who work in the mainstream media are too cowardly to do their fucking job. They don’t have the minerals to ask the tough questions. So that leaves us as the only actual institution of hot takes. Spread the word. Join the Turtleboy Sports revolution.