Gutless SJW Warren Selectman Vote To Fire A Good Cop Because He Shared Popular Meme About Fire Under A Facebook Post About A Fire Because….Racism A lot of people (ahem, right wingers) think that public sector unions are outdated and should be banned. This story out of Warren dealing with a recently terminated K-9 police officer shows just how dumb that opinion is:

Selectmen fired a town police officer last month after he admitted he posted a meme on the Fire Department’s Facebook page that could be viewed as insensitive. Shawn Morin, who was employed as a police officer by the Warren Police Department for 23 months, admitted to posting a meme as a comment on a Fire Department post on Facebook that said firefighters were going to a two-alarm building fire on North Street on May 2. The meme is a static picture based on a video clip on YouTube in which a black woman, in a TV news segment about a different fire in an unidentified locale, describes waking up to the smell of smoke and says, “I said, oh, Lord Jesus, it’s a fire!”Someone complained about the posting in an email to the Board of Selectmen, according to Mr. Morin. Mr. Morin was not on duty at the time he posted the meme.

Losing his job “came as a complete shock to me,” Mr. Morin said in an interview Monday night. “According to my letter of termination, it was solely due to the meme.”

“The meme is from that link, which is years old and is not racial or sexual,” Firefighter Jim Gagner said Wednesday. “It’s just funny.”

Mr. Morin indicated he will file a grievance.

Stop right there. This is the meme: Probably a top 10 most shared meme of all time. Although she’s more famous for this quote:

They didn’t stipulate what was wrong with this post, but I’m gonna guess that either it’s offensive to people who have had their homes burn down, or people who are not white. Probably the latter. But just to be clear, there is nothing even remotely offensive about this meme whatsoever. If it offends you then you are a pussy and a disgrace. You’re more than welcome to take offense to anything, but it doesn’t mean the rest of the world has to cater to the fact that hilarious memes trigger you. It’s not her race that makes her funny, it’s the overly dramatic way she speaks on live television. Just like these ones:

It’s literally just a meme about a fire, which was posted under a post about firefighters putting out a fir. That’s it. He was not given any warnings. He was just FIRED. But please, tell me more about how we don’t need unions. I’m sure bosses will treat employees fairly while not violating their rights if left to their own devices. In the meantime his fellow officers have changed their profile pictures: For the record, I’m well aware that the First Amendment does not come into play here. You have a right to say what you want, but you don’t have a right to your job. If you cross a line and post something that’s actually racist, you could and arguably should be fired. But since this is not racist in any way, shape, or form, it doesn’t apply here.

Officer Morin is a loving father of two children. His Facebook page is littered with images of them smiling together. 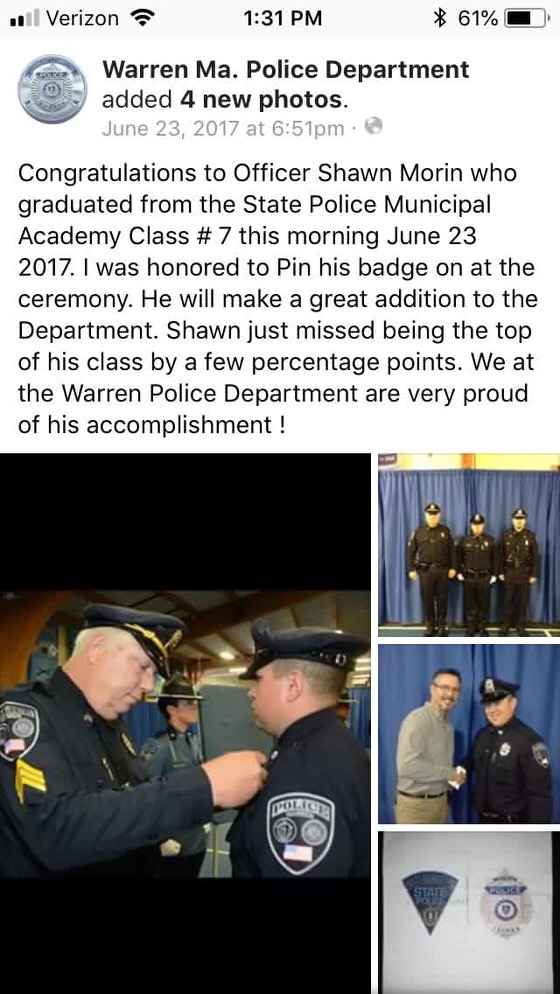 Do you think the Board of Selectmen care that these kids just had food taken out of their mouths? Nope. Because they’re too busy saving the world one meme at a time, due to a cunty emailer who decided to get offended over nothing, and is granted anonymity.

Over 60 people attended the BOS meeting on Tuesday, all of whom were there to support the cop, who by all means is good police. These small town departments don’t hire cops very often, and I assume it’s rather expensive to train them. Now they’ll have to do it all over again because some whiny little bitch out there didn’t like a meme, and the gutless BOS caved into them instead of having a spine. Editor’s Note: This is not the dooshnozzle selectman. This man actually supports Officer Morin and is no longer on the BOS. The BOS also lied, and it sounds like they’re opening themselves up to a lawsuit from the NLRB:

Selectmen said Mr. Morin was still in a probationary period for new hires so they were allowed to end his employment. But Mr. Morin said the probation period is 12 months. Mr. Morin said he marked his two-year job anniversary on Memorial Day.

If the probationary period is 12 months and he’s been on the job for 23 months then they can’t fire him that easily. Once again, this is why unions are so necessary. Because he could never afford to pay for a high priced labor attorney on his own. This is why you pay union dues. It’s insurance in case you get fucked over. The money mostly goes to attorneys to defend you and collectively bargain a fair contract. I hope he gets the best attorney money can buy and he sues the balls off of these thought fascists.

The only thing worse than a Nazi Facebook community page admin is someone on a small town board of selectmen. These people get so hard over the thought of the minimal amount of power they yield in a town hall that is the size of my kitchen. And the Warren Board of Selectman has three members – Marc Richard, John Nason, and Dario Nardi. It doesn’t say if the vote was unanimous, but at last two of them had to vote to terminate.

Marc Richard, chairman of the Board of Selectmen, said in response to Ms. Lafko’s remarks that this is the way they do business when a complaint arises.

“We had concerns,” Mr. Richard said. “We don’t target the Police Department. Everything to do with town business is public record. That’s why I personally don’t do email or Facebook. I don’t own a cellphone. The social media policy has turned into a nightmare.”

Are you fucking kidding me? He’s one of those, “I don’t do the email or Facebook machine machine because it’s too dangerous and I like to stick to my #2 pencil instead.” Anyone who thinks like that is unfit for public office in 2018. These people would rather throw their hands up in the air and say, “no one should be on social media” than they would actually trying to understand how social media works so they could understand the context of Officer Morin’s meme.

Oh, and the BOS ruined a charity….

After Tuesday’s meeting, Mr. Morin said an unnamed resident had told the selectmen about the meme by email. He wasn’t sure who it was. He went on to say that he intended the meme as a joke, and that it was in reference to a charity police-fire competition that Mr. Morin was hosting at Dean Park. He said the fundraiser had to be canceled as a result of his firing. No one at the meeting mentioned the racial aspect of the meme.

“I have a good rapport with the Fire Department,” Mr. Morin said. “However, it was assumed by the resident that I meant it to harm. Sorry kids who play Warren youth baseball and softball. You don’t get to have nice things this year because some assmuncher made the conscious choice to be offended by a meme.

Of course the police chief, just like most police chiefs, is a gutless politician who seems to be selling his officer out:

“We strive to be empathetic and responsive to the needs and expectations of our community,” Chief Spiewakowski said. “In looking at this issue from a standpoint of how it was posted and interpreted, I think that it lacked empathy, and it could affect the public respect of the department, which would be detrimental towards our mission and goals.”

A meme is detrimental towards your goals and mission? What?? Please, explain to me how a meme will stop this officer from saving a life or arresting a bad guy. I’ll wait.

The real asshole on the BOS seems to be Dario Nardi. He’s also the one who wrote the social media policy. He obviously voted to terminate, and seems to be the resident town bag of flaccid penises. At around the 10:45 mark of this meeting from February a citizen brings up the fact that he did a public records request for emails between the police chief and Dario Nardi, because he believed Nardi was harassing the police department. But in violation of open records laws and the FOIA, a bunch of the emails were deleted by him. He blamed it on someone else, refused to answer the man’s inquiries about what happened to the emails, and hid behind a bylaw that said that the town doesn’t have to answer questions about public records requests:

“I’m not required to answer any questions about public records requests.”

Be shadier. You can’t. Can’t the police arrest this guy? He broke the law. He deleted more emails than Hillary and has no explanation about what happened to them.

Oh, and when he brought up the fact that his wife had been sharing some of these emails online Nardi responded by saying, “my wife is not on the agenda tonight.”

What a piece of shit coward.

Then there was that time in 2015 when Nardi was investigated by the AG’s office for violating open meeting laws.

This guy has been fucking the cops over for years too. Last year he the union filed a complaint against him after the town didn’t pay cops for overtime that was worked. He once again hid behind some bullshit.

So….why is this moron an elected official? I don’t follow Warren politics but if Hitler was running against him I’d vote for Jill Stein. I got one word for you Warren turtle riders – RECALL. If this was Cambridge or Northampton I could understand if an anti-police selectman was popular. But this is Warren. These are real grizzled, salt of the earth of folk. There’s no reason these nudniks should be representing you people. Uncle Turtleboy says he wants to talk about this on the podcast tonight, so if any Warren turtle riders wanna come on and offer some insight please email turtleboysports@gmail.com so we can make that happen.