The Aaron Hernandez Netflix documentary was your typical bullshit – three hours of making excuses for why one of the NFL’s best tight ends suddenly decided to become a serial killer. At no point do they ever ponder that he was just a morally bankrupt piece of shit who had every possible advantage and threw it all away because he wanted to play gangsta-gangsta instead. At one point they even blame the fact that weed wasn’t legalized yet in Massachusetts, which forced him to go to his old boys in Connecticut (Ernest Wallace and Carlos Ortiz), and his association with them was his downfall.

But they also had on some Globey I’ve never heard of named Maria Cramer, who like many before her blamed Herandez’ suicide on Gerry Callahan, Kirk Minihane, and Michele McPhee for “outing” him and making butt sex jokes on the Kirk and Callahan show in April 2017. This happened days before Hernandez killed himself, so logically then he must’ve been listening in his cell and decided to end it all, or so goes the logic.

The Netflix documentary had a guy named Dennis SanSoucie and his father Tim on a lot too. Dennis is now claiming to be Hernandez’ gay high school lover, and really seemed to be enjoying the fame.

“We liked to horseplay.”

“I was a small piece of Aaron’s sexual activity.”

“Me and Aaron experimented and it was something we continued because we enjoyed it. Umm….hello?”

“We were in a relationship back then, but at the time you didn’t think about it that way.” I thought the whole thing sounded contrived and that Dennis liked the camera a little too much, so I did a little searching into him and I’m convinced he’s a pathological liar at this point. First of all, Hernandez isn’t alive to deny any of this. If you wanna say you banged a NFL player then do it when they’re alive. It’s not like he could hurt you in jail.

Secondly, Dennis claimed to be the quarterback of the football team, and his exact quote in the documentary was, “The minute we stepped on the field together it was the two best players. Quarterback and tight end, ready to rock and roll.”

Except there wasn’t much rockin and rolling going on. Dennis is listed as running back and linebacker for Bristol Central High School. 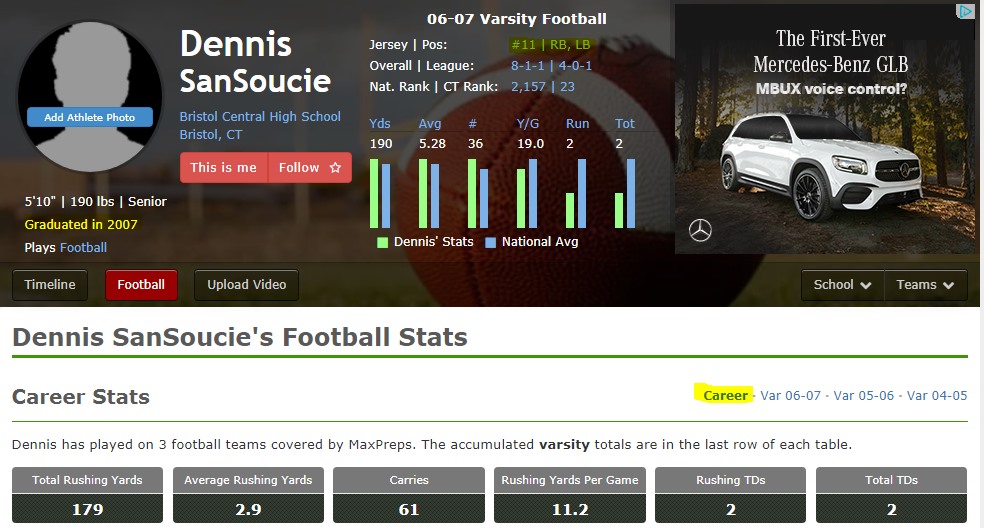 He used to play quarterback as a junior, but his numbers were pretty shitty, considering he had a future NFL tight end to throw to. He completed less than 50% of his passes in four games before getting benched. As you can see, he didn’t play quarterback senior year, a year in which Hernandez lit shit up and went on to became the state player of the year. So who was throwing the ball to him? That would be Matt Coyne, a junior who stole Kyle Kennedy Part 2’s job. That’s him in the bottom left. You’ll notice that in all of Hernandez’ highlight videos it was always #7 throwing to him, not #11 (SanSoucie). 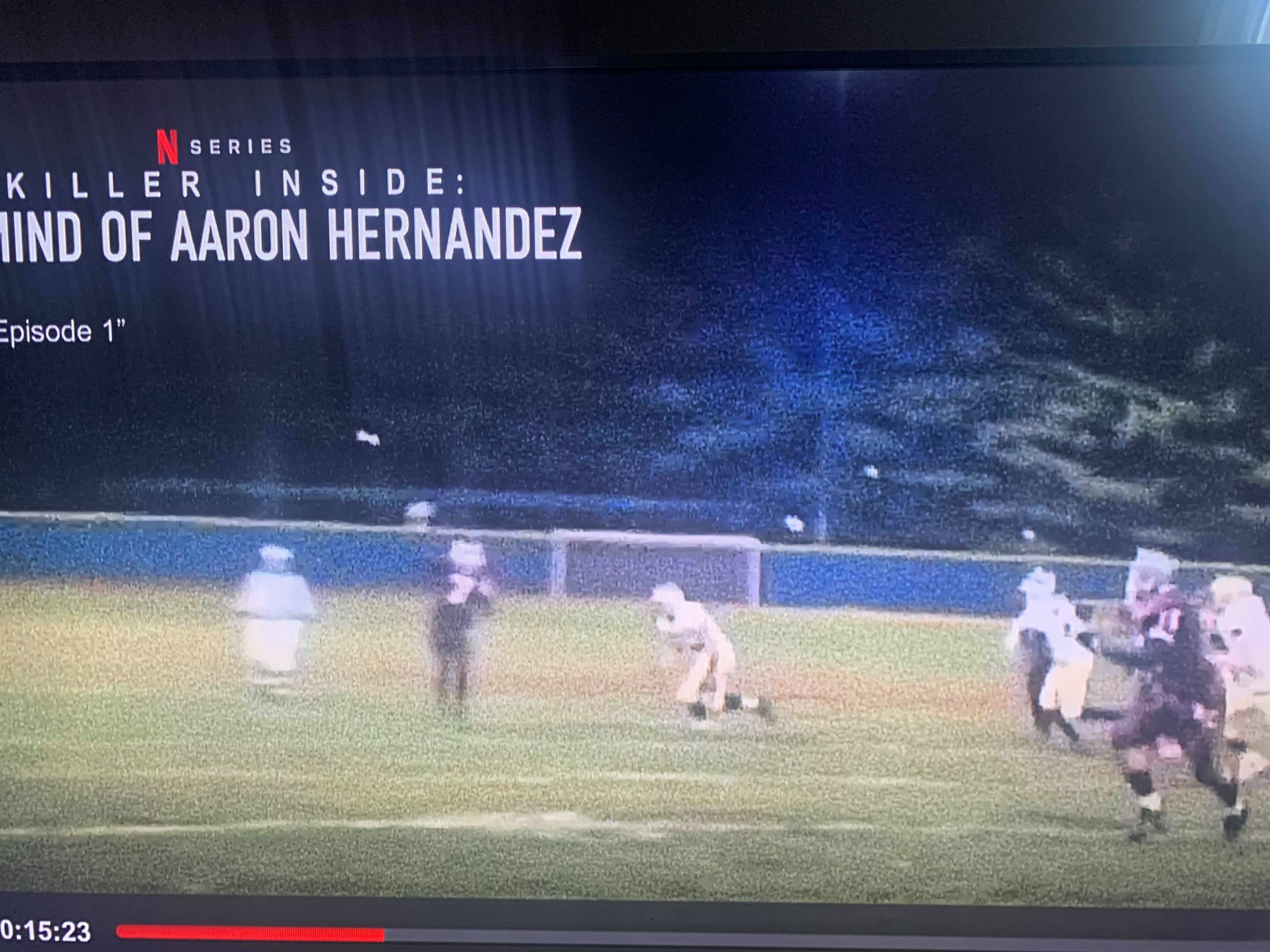 During SanSoucie’s senior year he threw just one pass for 25 yards, while Coyne threw for 2,402 yards with 26 touchdowns.

So basically he was Marcus Mariotta, Tim Tebow, or some other backup they’d bring in for a trick play.

But remember, they were the “2 best players on the team.”

“Ready to rock and roll.”

And it looks like the four games that he played quarterback for as a junior (2005) were only because Matt Coyne was injured. Didn’t stop Matt Coyne from dominating life that year as a sophomore, as he had the third most yards passing in school history that 05 year. His junior and senior years were 1st and 2nd. 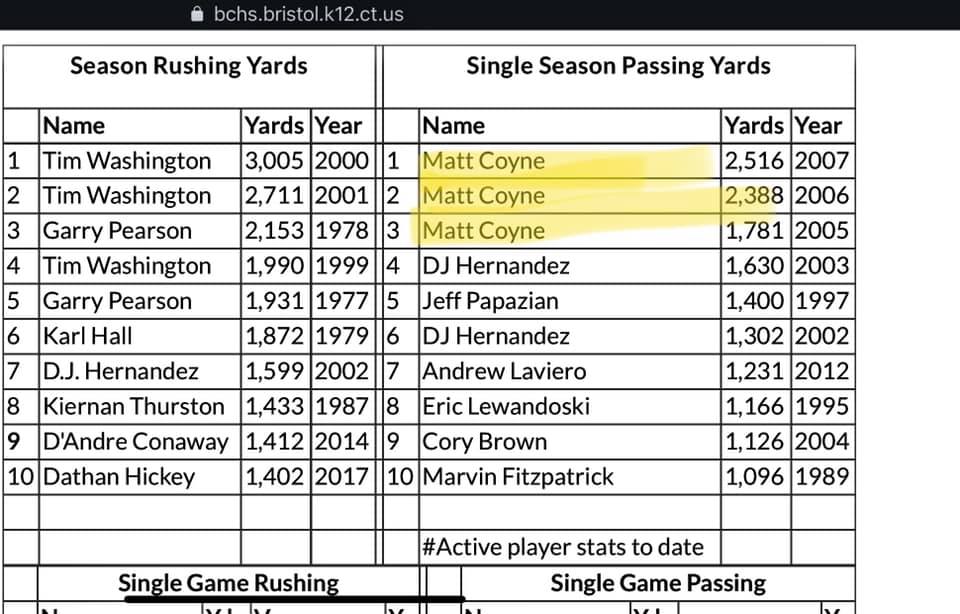 Also, pretty impressive that Coyne had the most yards in school history the year AFTER Hernandez left Bristol. Probably why he was hired to be the offensive coordinator for Anna Maria College in Paxton in 2017. This all begs the question, if Dennis SanSoucie is willing to blatantly lie in front of the Netflix cameras about being an all-star quarterback, is he willing to lie about being Aaron Hernandez’ high school fuck buddy now that Hernandez isn’t around to deny it? It’s not the end of the world if he’s fibbing, but considering that Hernandez’ alleged homosexuality is what drove him to kill Oden Lloyd, and the fact that the Globe accused Gerry Callahan’s jokes of causing him to kill himself, it seems kind of relevant.

Anyway, lots of people are talking about this on social media, so I figured it was worth actually publishing something about.