Yesterday I published an article about this tittooed sperm sponge from Hartford who brought a convicted child rapist into her house, found out he was sexually assaulting her 6 year old son, and then told him she wouldn’t go to the cops so long as he paid her $120. Then she went to the cops anyway. The guy admitted he raped 58 children. It’s the first thing you see when you Google his name. She invited him into her home anyway. That in and of itself should be a crime. Never mind the fact that this disgusting, woe is me slam piglet found out about it and immediately didn’t run to the police or end his miserable existence. 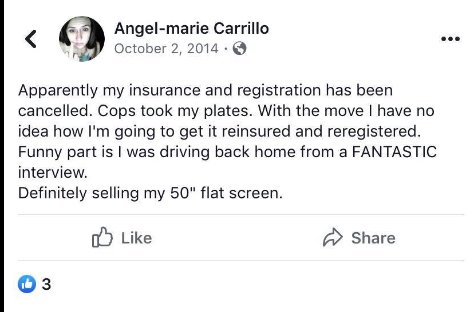 As a mother I find it incomprehensible that any mother could allow this to happen. She’s not a real mother. A real mother would never, ever, ever associate with someone like Paul Grimsley. She’s just a junkalope with the ability to reproduce who will let anyone inside her stench trench. She had one job – protect her kids. She chose $120 instead.

Considering how heinous this crime is, and the fact that she was wanted by police, it was baffling why the Hartford Courant chose to take Angel-Marie Carillo’s name out of their article on the story. Note the before and after screenshots. A turtle rider took it upon himself to find out why by contacting Courant reporter, Jesse Leavenworth. “We decided that identifying her would ID the victim.” That guy right there is too old to be a reporter. He clearly has no idea how the Internet works, which should be a requirement in a digital era.

Newsflash – the Internet is forever. You can’t just publish something in a well established newspaper, leave it up for hours, then take it down and assume no one noticed. Google cache never goes away.

But at the very least, put a freaking update at the top of the article. Your readers aren’t stupid (except the ones who actually pay to read your shitty newspaper), they’re going to notice that you took her name out. Especially with a story like this where people want to name and shame. And she totally deserved to be named and shamed for her crimes.

I get that they want to protect the child’s identity, but the cat’s out of the bag on that one. Plus, the precedent being established here is that if you want to commit a crime, and you don’t want you name dragged through the mud by the media, make sure it involves sexual violence against your own crotch fruit. In fact, no one deserves to have their name dragged through the mud more than Angel-Marie Carillo.