In today’s chapter of “race baiting beyoch fabricates a fuck the po-lease lie on Facebook that gets shared thousands of times,” we bring you this post from a woman named Dina Willis, AKA Lee Angel. Yup, I’m sure that’s exactly what happened. Some poor, innocent kids were minding their own business at Nantasket Beach in Hull, when some racist Beach Becky’s saw them swimming and were like, “let’s call the cops on these fuckers and watch the racist cops shoot them.”

Obviously there’s a lot more to this story that isn’t being shared, but the truth doesn’t matter to race baiting garbage like Dina Willis from Boston. (that’s Lee Angel’s real name). And since we like to actually do research at Turtleboy Sports we spoke with people who were there and here’s what really happened.

No doubt this trash muffin will call me a racist for blowing up her false narrative, but I could care less because thanks to people like her “racist” has completely lost whatever meaning it had. The post has been shared 4,400 times and counting in less than 48 hours, because people believe what they want to believe. The media has been force feeding them bullshit for years about the police being a racist occupation force, and this is how it manifests itself on social media.

Yea, it’s definitely a wicked good idea to tell your crotch fruits that the cops aren’t their friends. Tell them to resist and refuse to cooperate. That greatly increases their chances for survival and helps the community as a whole. This idiot is a realtor for Remax too. Although she sells homes in Brockton, which is like selling stocks of MySpace. She’s one of the “good ones,” and has proven herself worthy of woke praise by disavowing members of her race who helped the police resolve a situation in which the teens in question committed a crime, in order to alleviate the white guilt that runs through her by being from the whitest part of Boston. Please clap.

Can we see the whole video, or nah? She can’t share the video because it will show the kid’s faces, but she will share the picture which shows the kid’s faces. Makes sense. Also, she hasn’t gotten permission from their parents, probably because the parents recognized that their kids fucked up which is why they agreed to pay for the booze.

Now they’re planning organized harassment campaigns on the Hull Police because Dina Willis blatantly lied about what transpired at the beach that day. Oh, and she’s inspired her friends like Amadi Nkwachi from Columbus to threaten to kill police officers on her page. “Don’t hesitate to kill one.”

This man’s Facebook page is littered with pictures of himself with guns. I’m all for responsible gun ownership, but people who threaten to murder police on Facebook shouldn’t own guns. If that makes me a “libtard” so be it.

Shockingly Hussy Smollett has a long and documented history of whining about the police allegedly being racist towards her by not helping her kid with autism. I’m sure that’s exactly what happened. The Brookline Police were called to “help” her with her autistic son and they were like, “Nah, we don’t like black people, but we especially don’t like autistic people. Kindly fuck yourself. Amerikkka.”

Last week Bette Midler tweeted out this incredibly racist statement because she saw black people who had the audacity to think freely and not blindly support the party that rich white women like her tell them they have to support. 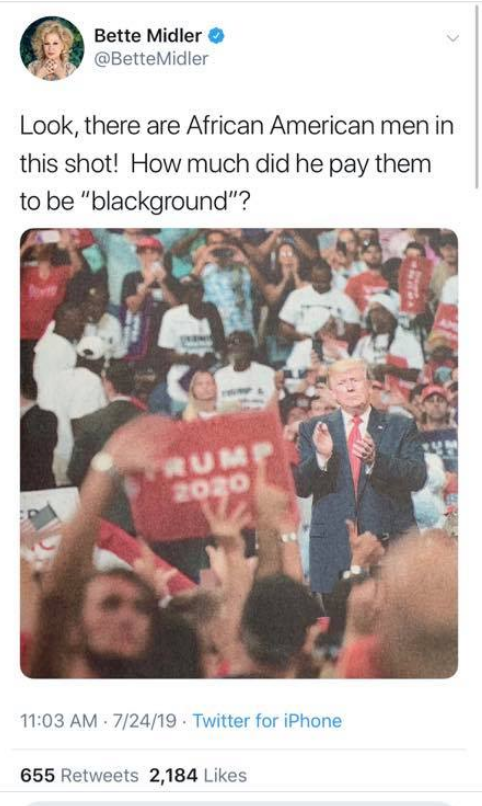 The tweet has since been taken down because it’s so disgusting and blatantly racist, but Dina Willis agreed with it 1,000%. “Any black coon who supports Trump is either paid or an idiot.”

Translation – I can use racial slurs to demean black people who support different politicians than I do.

To the surprise of no one she is a supporter of “The Squad” and our local contribution to this merry band of morons in Washington. Dina has also received awards from the Boston City Council. And she seems to take an active interest in education by standing in front of signs that represent large bureaucracies that do nothing but fail children. She also was bitching about how Watertown homeowners don’t take Section 8, allegedly because they don’t like black people or Muslims (remember that one time two Muslim terrorists held the town hostage for a night?). Yet just a week before complaining about this she was talking about flying to Los Angeles. Can afford to fly across the country and go to DMX shows but still qualifies for Section 8. Must be hard being this oppressed. Glad to see my tax dollars are being spent wisely on people who totally don’t abuse the system per usual.

In conclusion, this woman is a lying piece of shit who gets off on stoking racial tensions. The Hull Police did their job and were more than fair to these kids by not arresting them. Now she’s Turtleboy famous for being the fraud that she is.