Jesse Jackson has decided to weigh in on the inflammatory comments that Phil Robertson made to GQ about gays and African Americans.

In an interview with Drew Magary, the “Duck Dynasty” star said the Nazis needed Jesus, that he never saw the mistreatment of African Americans while growing up in Louisiana before the civil rights era and that homosexuality was a sin.

A&E has already suspended Robertson, but Reverend Jackson, his Rainbow PUSH Coalition and GLAAD are demanding to meet with network execs, along with Cracker Barrel’s CEO, to discuss the future of all “Duck Dynasty” memorabilia or content.

“These statements uttered by Robertson are more offensive than the bus driver in Montgomery, Alabama, more than 59 years ago,” Jackson said in a statement obtained by ABC News.

“At least the bus driver, who ordered Rosa Parks to surrender her seat to a white person, was following state law. Robertson’s statements were uttered freely and openly without cover of the law, within a context of what he seemed to believe was ‘white privilege.'”

The release, dated Dec. 23, requests a meeting within 72 hours with A&E and Cracker Barrel execs and urges the network to uphold Robertson’s suspension.

Jackson and GLAAD said they believe it’s not right for a personality with such a large platform to benefit from such comments.

On Sunday, Robertson defended his comments about gays and blacks to a small Bible study group in West Monroe, La.

“I will not give or back off from my path,” he reportedly said Sunday.

Robertson added that his GQ comments were quotes from the Bible. “I didn’t think much of it at all, but it seems a lot of other people did,” he said.

Is it possible for the black community to have a worse spokesman than Jesse freaking Jackson? Look, as a white guy I get that my understanding of the African-American experience is from a second hand perspective. But, if this nudnik is the self-proclaimed voice for millions and millions of people (without their consent) then your cause isn’t really going anywhere. The second the Reverend Jackson gets your back on something is the moment whatever you stand for turns into a complete circus. Every single time he gets involved in an issue he comes out looking like a complete dingleberry. When he’s not falsely accusing Duke lacrosse players of rape, he’s preaching about morality from the pulpit while secretly popping out love children with his secretary.

Take for example the fact that he’s saying that what happened to Rosa Parks isn’t half as bad as what Phil Robertson said in an interview. First of all, who is Phil Robertson? Yea, I know he’s on Duck Dynasty which apparently is a show that everyone watches except for me, but it doesn’t exactly mean he’s gonna appear in the history books right after the War in Iraq. He’s an old conservative redneck from Louisiana. What exactly did people think his position on gay marriage was gonna be? Can you picture this person… 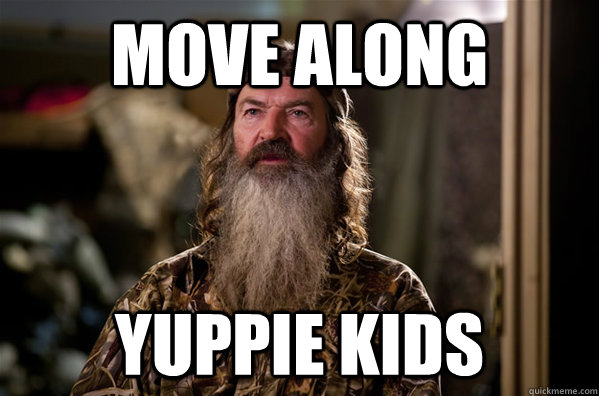 Yea, that would go over like a fart in church. So what Phil Robertson thinks about social issues really matters to anyone at all? First of all, let me just clarify that TurtleBoySports preaches tolerance and acceptance, so we disagree completely with the opinions of Mr. Robertson. But vitally more important is Mr. Robertson’s right to say whatever ideas are evolving deep in the loins of his beard. Don’t like it? Go on the internet and make things up about his wife. Or talk about on Facebook how you think he’s an idiot. Or better yet, don’t watch a show where the main characters are bearded red necks from Louisiana who like guns.

I’ll never understand the fascination with asking people questions that we already know the answer to in order to get people fired up. Look, keep this sort of crap separate. When I go to McDonald’s I don’t ask Grimace what he thinks of abortion. Let the man shoot ducks and stop asking him stupid questions.

Oh yea, and the Reverend Jackson was accused of firing a gay employee in 2011 for being gay. So this story just makes perfect sense.