Question for all the dudes out there, especially the dads. Do you find this sign from Tougas Family Farm in Northborough, the best apple picking farm in Massachusetts, offensive?

Most of you are probably saying, “No of course not. What kind of stupid question is that?” You also might be saying, “That sign is PG satire that pokes fun of men who are stuck apple picking while football is on.”

You would be correct. Because obviously only a complete dingleberry would see a sign like this and take offense with it. But then again we’re living in an age where you can get offended by whatever the fuck you wanna be offended by, despite the fact that your grievances are completely insane. And to cap it all off, you will be taken seriously instead of publicly humiliated and mocked as you should be.

Well, as you know, this is why Turtleboy Sports exists. To call people out on their bullshit, and to protect the good people amongst us from their shenanigans. Because it appears that not ALL men feel that this sign is a harmless joke. Check out the Facebook page by some nudnik named Aaron Gouveia, known as “The Daddy Files.” 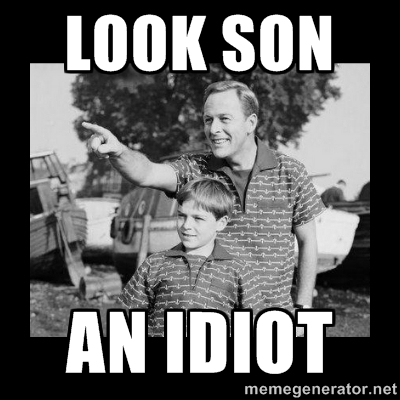 Hey genius – stop being such a naniburger and have some God damn respect for yourself man. This is embarrassing and humiliating on so many levels.

First of all, it’s a bad idea by starting off a sentence saying, “I know many will accuse me of being whiny and having a mangina.” If you have to start off a sentence with a disclaimer that you recognize that you are in fact about to act like a mangina, then that sentence is better off being kept to yourself. Because guess what? If you know everyone is going to call you a mangina ahead of time, then you’re probably being a mangina. Stop right there before you press enter.

Secondly, there is nothing I hate more than apple picking. I fucking hate apples and so do 75% of Americans. Why is this a tradition? There’s a million different kinds of fruits out there that are better than apples. Plums and pears are easily 1 and 2 in the fruit rankings. How come we don’t get to pick those off trees? That’s something at least I can get down with. But apple picking? First of all they’re heavy as shit. Secondly their texture sucks and they’re coated in a plastic-like cover. Thirdly, it’s always brown by the time you get to the core.

It’s a shitty, shitty fruit, and for whatever reason we pay top dollar once a year to take our kids to place like Tougas Farm in Northborough and fill bags with them. And why? Because the ENTIRE season of autumn belongs to women except for football. We get football. They get everything else. Like, fairs. Women love these God-forsaken relics of 19th century town life. Why? What the hell is fun about going and smelling goat shit in Woodstock CT? Why do I wanna watch a frog jumping competition in Sterling? Who gives a shit about the biggest prize pumpkin in Topsfield?

No one, that’s who. Women don’t even like this stuff. They’ve just convinced themselves that they do because men hate it. Nobody actually likes fairs. They just like the IDEA of going to a fair. It feels like fall. When women get to abandon the daisy dukes and put on a hooded sweatshirt and yoga pants. curl up in a blanket, and drink warm apple cider. It’s just a bunch of nostalgic bullshit. In women’s minds this is what happens when you go apple picking:

Ya see that? This is all Pinterest’s fault.

In reality though, only someone who writes a blog called “The Daddy Files” can actually have a good time apple picking. So my question for Aaron Gouveia, is why the fuck are you paying attention to signs at the apple farm? Is it because you have so many vowels in your name? Why are you doing anything except going on your phone and reading Turtleboy Sports? More importantly, why are you taking it so seriously? Newsflash – it’s a freaking joke!! Chill the fuck out dingleberry. Everyone knows dads have value. Everyone knows dads aren’t kids.

But as men, we’re supposed to be the funny ones. We can take a joke. We’re supposed to be the ones that kids can turn to for a good laugh when mom is freaking out about what you’re gonna wear in school pictures. When mom is grilling little junior about his shitty progress report, dad is supposed to be sitting on the couch watching the game. Dad is only supposed to speak when mom says, “Hey Turtleboy, are you gonna back me up on this one with Turtleboy Jr.?” And then you give your kid the token lecture before taking them out for ice cream. Kids need their dads for discipline and humor. Hasn’t this numbnuts seen Mrs. Doubtfire?

I’m not gonna lie, I was expecting more of a sense of humor from a guy who dresses like this: 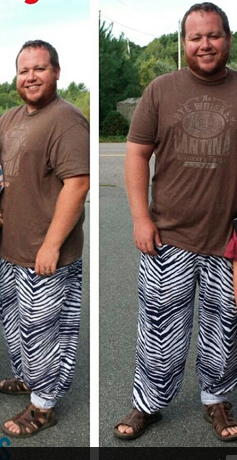 I mean, the guy is a fat bastard. He obviously gives zero fucks about appearance, which I respect the hell out of. Everything about him is magnificent. From the “I stopped giving a fuck” five o’clock shadow, to the “I just rolled out of bed and tossed this t-shirt I found on the floor on”, nothing about this guy gives me the impression that he would give a shit about a sign with a harmless joke on it. And where do you even go about buying zebra pajama pants? I need a pair of those stat. They go so perfectly with crocs too!!

But for whatever reason he does care. His site, “The Daddy Files” was created in 2008. Apparently there is a small market for ice cold takes about faux outrage. This guy obviously just writes ridiculous things for page views. Because as dads we’re supposed to have a better sense of humor than mom. Mom is supposed to be the embarrassing one that freaks out over signs like this. Dad is supposed to be cool, calm, and hilarious.

But apparently not ALL men got the memo:

Calm down fuck boi. What’s really sad about this is that it’s not a “lone dad” situation. This guy has other dads who agree with him. Apparently they all expressed their outrage to the farm and they got their way: 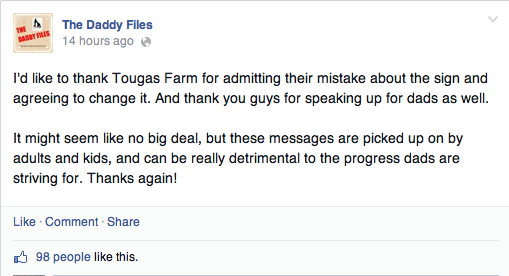 Yup. 98 morons agreed that this gross overreaction was a good thing. Obviously Tougas Farm took it down. They’re not in the business of controversy. They’re in the business of getting you to buy bags full of a terrible fruit. This guy acts like he just convinced the King of England to grant American independence.

Newsflash – they took the sign down because they decided it wasn’t worth it to deal with your moronic ass. They weighed the pros and the cons. On one hand, they could keep the sign up and deal with you and your army of nudniks hounding them day and night about your delicate sensibilities. On the other hand, it’s just a fucking sign. Take it down and all problems go away. They chose the latter, not because it was the right thing to do, but because they just really didn’t give a shit.

This is how society works now. Everyone out there is outraged or offended by something. Instead of standing up to bozos like you, it’s easier to just throw you a bone so you’ll shut the fuck up. Unfortunately for you, Turtleboy Sports doesn’t give into offended terrorists like you. Tougas Farm saw a post like this:

And realized that you’re a psycho who could be appeased pretty easily.

And for some reason all these soccer mom’s have his back too:

First of all, Turtleboy Sports is a family blog, and we don’t give a shit about this sign. Secondly, this farm is not there for “educational” purposes. It’s there to make money off of people who wanna pick a bunch of apples that their kids are gonna end up smashing in the driveway for sport. Most importantly, your son doesn’t give a shit about this stupid sign. He probably didn’t even read it. Because he’s a kid who wants to chase his stupid sister around with a worm, go for a hayride, and talk about how much the goat shit smells.

First of all Kirsty, anyone there is no “u” in “humor.” We get it – you’re an enlightened Boston brahmin. We’re all very impressed. And why are these people acting like this sign is the downfall of humanity? Like men are all gonna turn into a bunch of deadbeat sperm donors because of a sign at an apple farm in Northborough!! Newsflash – this harmless sign is not telling men that they can’t handle responsibility. If it were, then it wouldn’t be a joke.

Look, there’s a fair amount of shit I get fired up about when it comes to the feministos. Like for instance, it is no longer a woman’s job to cook and clean. Fair enough. Equality in the Turtleboy household. So then why the hell is shoveling still the man’s job? Shoveling sucks, and it’s supposed to snow a lot this winter. That’s something worth getting fired up about.

But this isn’t one of the things. Because it’s a stupid fucking sign in Northborough.

When I’m on this page I feel like I’m in a bizarro world. Kind of like when I was reading all those complaints about police brutality last week. For a minute there I thought I was in the minority. Like I was back in a classroom at UMass with a hippy professor telling me that white straight cisgender men are the devil. But then I’ll write something like this and I’ll be reminded that the vast silent majority out there feel the same way I do. It’s just dillweeds like this that make it seem like they’re in the majority because they yell louder than everyone else. Well, this is why Turtleboy Sports exist. We are the voice of the silent majority who will not be silent anymore. We will call you out on your bullshit and shenanigans. Either you’re with us or against us. Join the revolution. Ride the turtle. 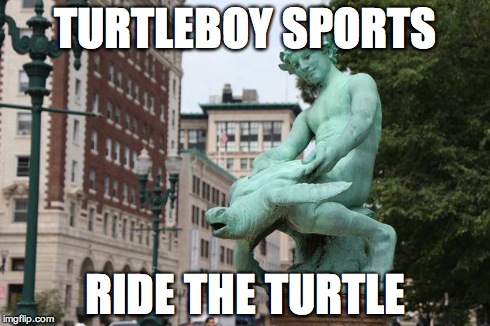