Local Woman Who Killed 2 Unrestrained Kids While Texting And Driving Posting Pictures Of Herself Smiling At Memorial, Remains Free While Awaiting Trial So here’s a fucked up story. On June 20, 2014, a woman named Suzanne Hardy crashed her vehicle while driving on Route 20 in Brimfield. A truck in the left hand lane was turning left so she passed in the right lane but hit the guardrail on the right hand side, causing the car to swerve into oncoming traffic coming from the east. There were three children in the car – her own infant son, along with one year old Jayce Garcia and four year old Dylan Riel. Joyce and Dylan died. However, during the last two years it’s been revealed during the accident reconstruction process that Suzanne Hardy was texting while driving and she did not properly restrain the two boys. She was charged with two counts of manslaughter, two counts of motor vehicle homicide by negligent or reckless operation, one count of assault and battery with a dangerous weapon, and three counts of reckless endangerment of a child. But she was released on bail.

Then earlier this year she was arrested in Newburyport with a stun gun:

Hardy was charged in the Newburyport stun gun allegation on April 9 when police stopped a car in which she was riding. He said she was summonsed to court for July 25, at which time she denied the stun gun charge and had the bail in the Hampden Superior Court case revoked. Forsyth said the car in which Hardy was riding was stopped at 2:44 a.m. She was a passenger in the back seat and a pink stun gun was found on her left side. She admitted it was hers, he said.

Despite the fact that she violated the terms of her release, she still remains free. And despite the fact that as a condition of probation Suzanne Hardy must stay away from Nicole Riel and Andrés Garcia of Southbridge, the boys’ parents, she sees them frequently around town.

Oh, and here’s the really classy part – she’s been posting pictures of herself and her child (the only child in the car who was restrained properly) at the accident scene: Keep in mind, they’re dead because of her. Because that text message just couldn’t wait, and the kids’ lives didn’t matter enough to have them restrained properly. Don’t worry though, she’ll still take credit for the fact that she took her son there: 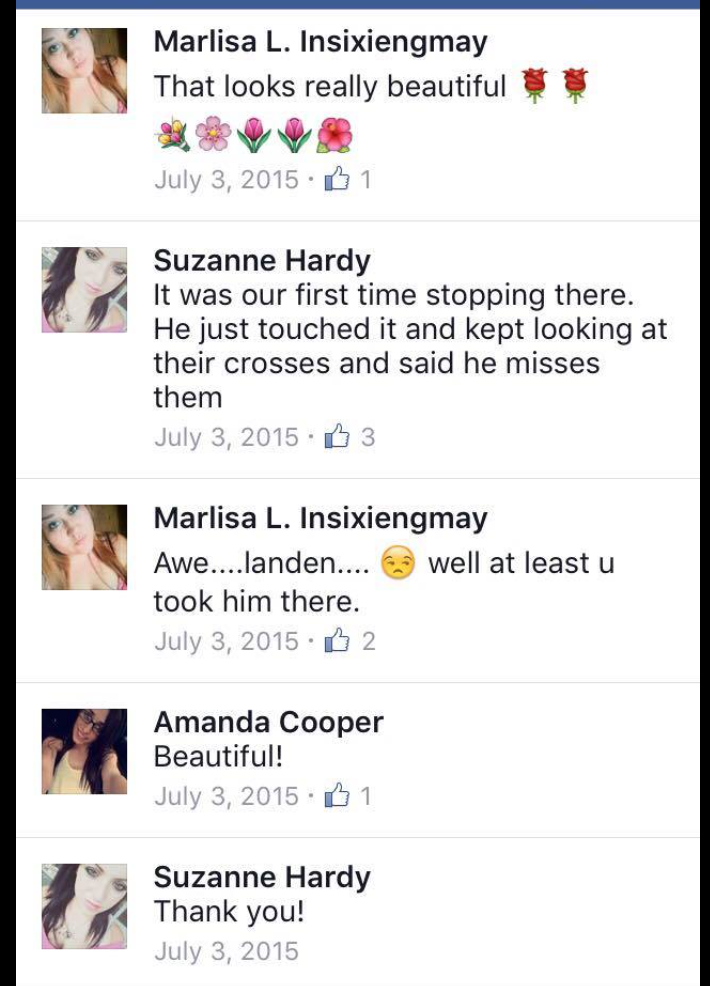 Her Facebook is rocking all the signs of a real winner too. From the trailer park bathroom selfies Her trial was supposed to begin on October 3rd, but today in court she got yet another continuance until January. Because in Massachusetts our judges like to keep criminals in mainstream society for as long as possible. She gets another four months of freedom, just in time for the holidays. But the boys’ parents still go without justice and have to see the person who killed their kids posting pictures on Facebook at the scene of the crime. Welcome to Massachusetts.