Here’s a video that was sent to us by a user who then blocked us for some reason, depicting quite possibly the two most vile junkie shitbags you will ever see, driving around their crotch fruit all fucked up while texting.

I’ve never hated anyone this much since last week because I expose people like this for a living. He admits that he almost killed three people earlier in the day for the crime of crossing the street while he was texting.

Fuckhead: “Dying to get run over these fucking morons.”

Fuckhead: “What the fuck were they doing?”

And this is how he speaks to his own crotch fruit.

Fuckhead: “I can see you too and you’re fat.”

Fuckhead: “He’s a pig, he eats everything.”

Notice the poor poon polyp isn’t even wearing a seatbelt in his carseat. And the idiot he has to call Dad is clearly fucked up, driving his car while staring at his phone.

Fuckhead: “Do you wanna get slapped, is that what you want?”

Crack whore: “I do. I wanna get slapped.”

Seriously, just overdose already and do the world a favor. No one will miss you, and your kid will have a better shot in the foster system. Maybe there’s someone in the extended family who isn’t a waste of space and can take the kid in.

He’s driving through a densely populated area while staring at his phone, all fucked up, ripping butts. 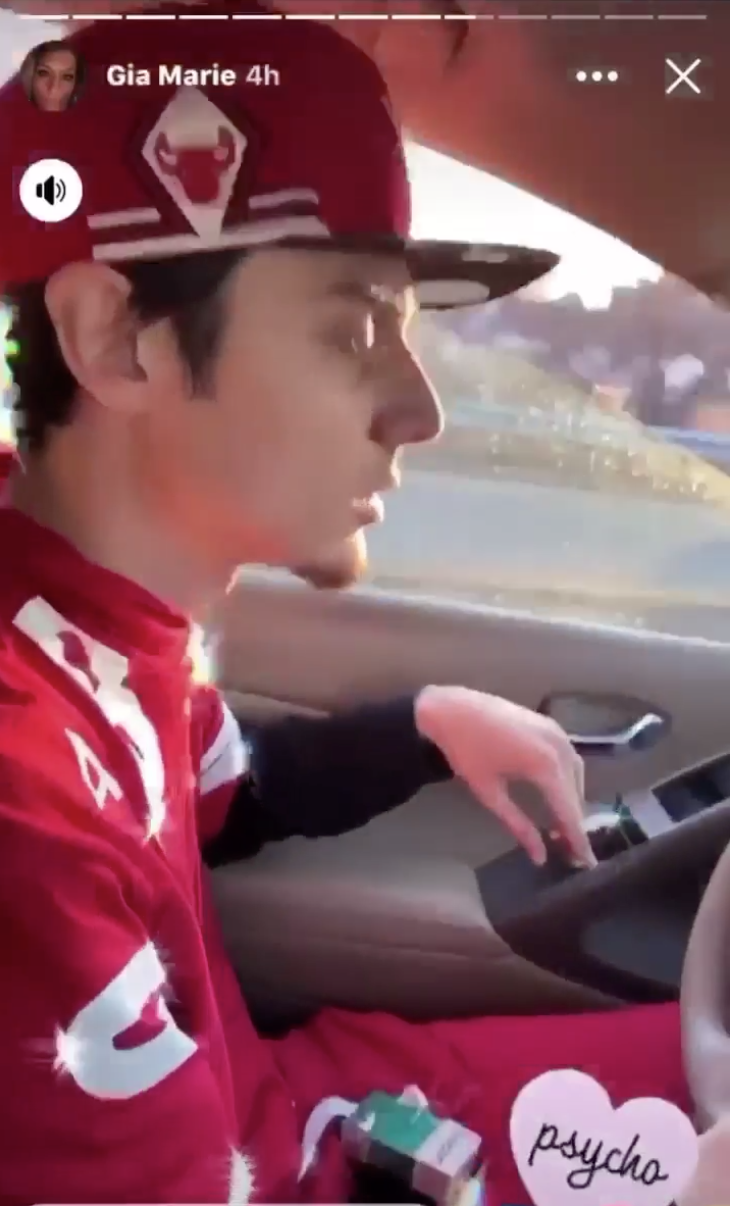 He throws the cigarette out the window like the useless piece of trash that he is. And of course he had queef triangle going on. Not sure what the crack whore’s real name is since she goes by Gia Marie on Snapface. But the fact that she’s from Revere is the least surprising turn of events ever. She went to beauty school, yet even a Snapchat filter can’t save her from permanent junkalope face. Fuckhead’s name is Mark Contrado. You’ll never guess what he aspires to be. A rapper. Never saw that one coming. His rapper name is Metro Saint, and his music gave me AIDS.

Yet somehow this fuckstick was featured three years ago in “ParentingJourney.org” as the model junkie parent working hard to get his crotch fruit back. “If you have to put your pride aside for your kid, that’s not making you a sucker – that’s making you a good parent,” explains 24-year old Boston native, Mark Contrado Jr. “I would do anything for my son and I live by that.” This realization, along with an endless reserve of perseverance, is what drove Contrado to turn his life around, creating a brighter future for himself and his son.

He would do anything for his son. Except put a seatbelt on him. Or refrain from threatening to slap him and call him a “fat fucking pig.”

Just a reminder that this kid is four years old, and the crack whore in the video thought he was two.

That’s how little they care about this kid.

Of course the article praises him for overcoming adversity to be an All-Star parent.

Starting as a teenager and through the age of 22, Contrado describes how he fell into a pattern of drug use and addiction. “I got to a point where I was digging a hole until finally I looked up and realized I had dug a pretty BIG hole,” says Contrado.

When his son, Mark Contrado II, was born and then hospitalized for two and a half months, it hit hard. “Just seeing the pain that the baby was in – I literally felt it inside and it hurt,” recalls Contrado. Due to a number of different factors, it wasn’t before long that the State started reducing visitation rights of both parents, eventually placing Mark Contrado II in transitional care. During this time, Contrado and his son’s mother found themselves without a home, struggling to make ends meet.

Gee whiz, I wonder why the kid was hospitalized for the first three months of his life. Maybe the fertility factory he came out of had the “disease” that’s been going around.

Contrado has already successfully completed several of the goals he set for himself in Parenting Journey II.  He has a steady job as a carpenter and he has a safe home where his son now resides. He dreams of gaining full-time legal custody of his son and becoming a full-time musician. Contrado’s face lights up as he relays the story of his son’s first steps, which he took during a visit to DCF just three weeks ago. “His health is now good,” Contrado says smiling. “He’s come a long way.”

The fact that his goal back then was to become a full time “musician” should’ve been a red flag. So are his Facebook posts selling brand new unopened kid’s gifts on Facebook. Sorry kid, you probably would like that toy but Daddy’s gotta meet up with Diego for the new testers and Diego doesn’t take food stamps like he used to.

I pray to God someone from DCF sees this video and blog and takes immediate action. Because that kid’s life is in danger every second he has to be around these junkie slugpumps who couldn’t be bothered to wear a rubber.