Mass Woman Murdered In Front Of People At York Beach By Baby Daddy Frequently Posted About BLM And White Privilege, Suggested That “All Lives Matter” Was Inappropriate For Her To Say Last Friday a Bedford woman named Rhonda Pattelena was murdered by Jeffrey Buchanan, the father of her child, in broad daylight at a beach in Maine. Story:

State police have arrested a Massachusetts man and charged him with the murder of a woman whose body was found Friday afternoon on Short Sands Beach in York. York police received multiple 911 calls around 3:54 p.m. Friday reporting a man was assaulting a woman behind a large rock on the beach, the York Police Department said in a release. Police said they arrived to find the body of 35-year-old Rhonda Pattelena of Bedford. They also allegedly found Jeffrey Buchannan, 33, also of Bedford, Massachusetts, at the scene. Police said Buchannan was Pattelena’s domestic partner and the father of her child. Buchannan was detained at the scene and taken to the police department. 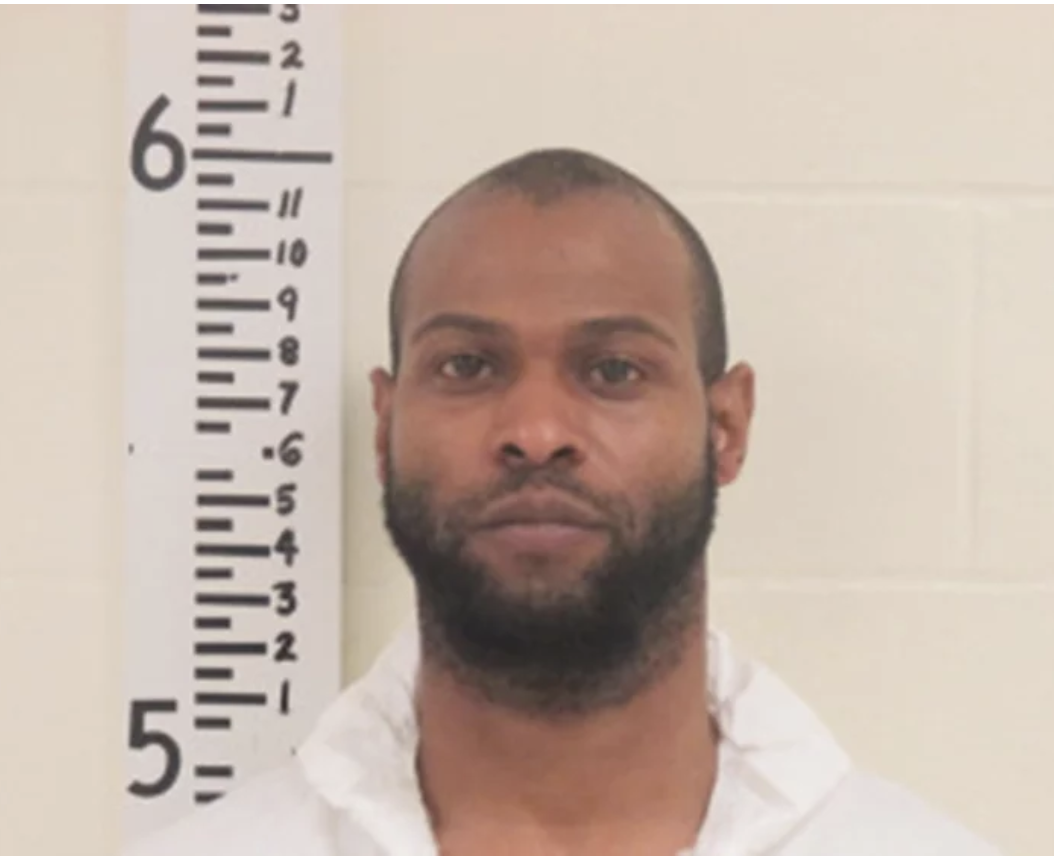 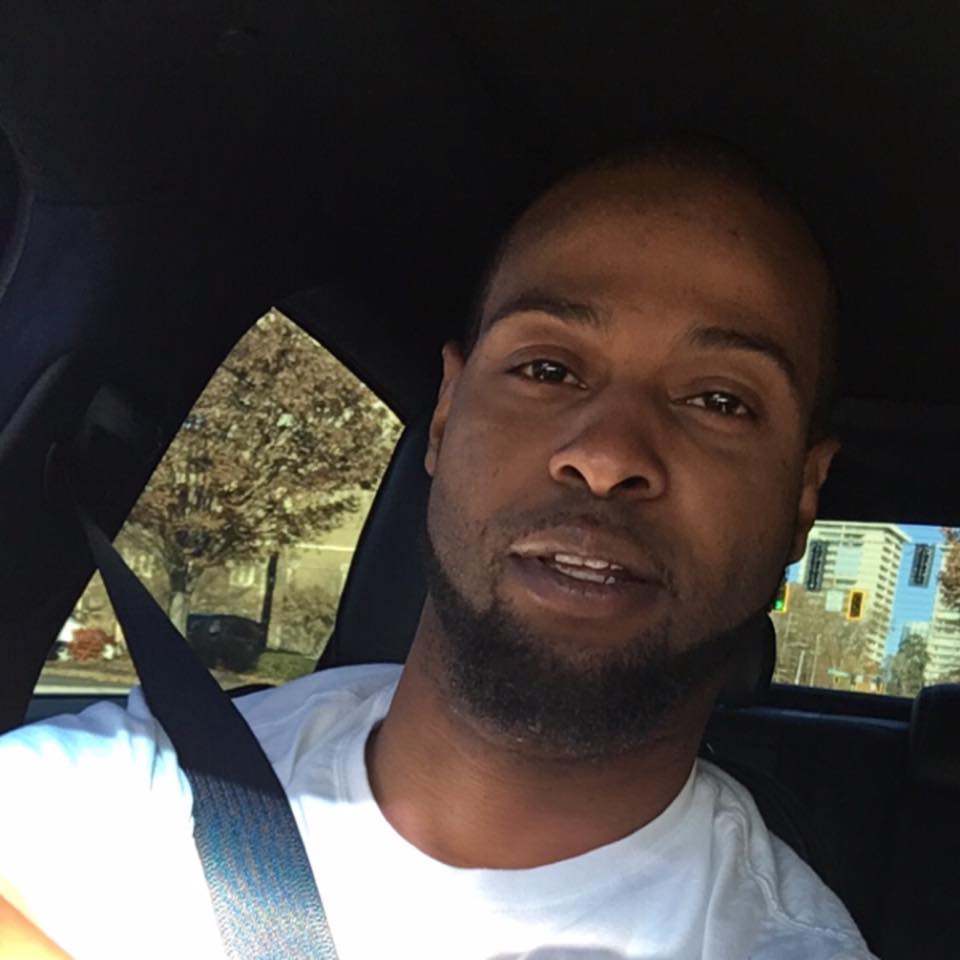 This is a sad and sensitive topic for obvious reasons. Three children are left without a mother due to domestic violence, and Jeffrey Buchanan is an animal who deserves to spend the rest of his life behind bars. A quick glimpse at his Facebook page reveals that he is in fact a huge asshole and a narcissist. 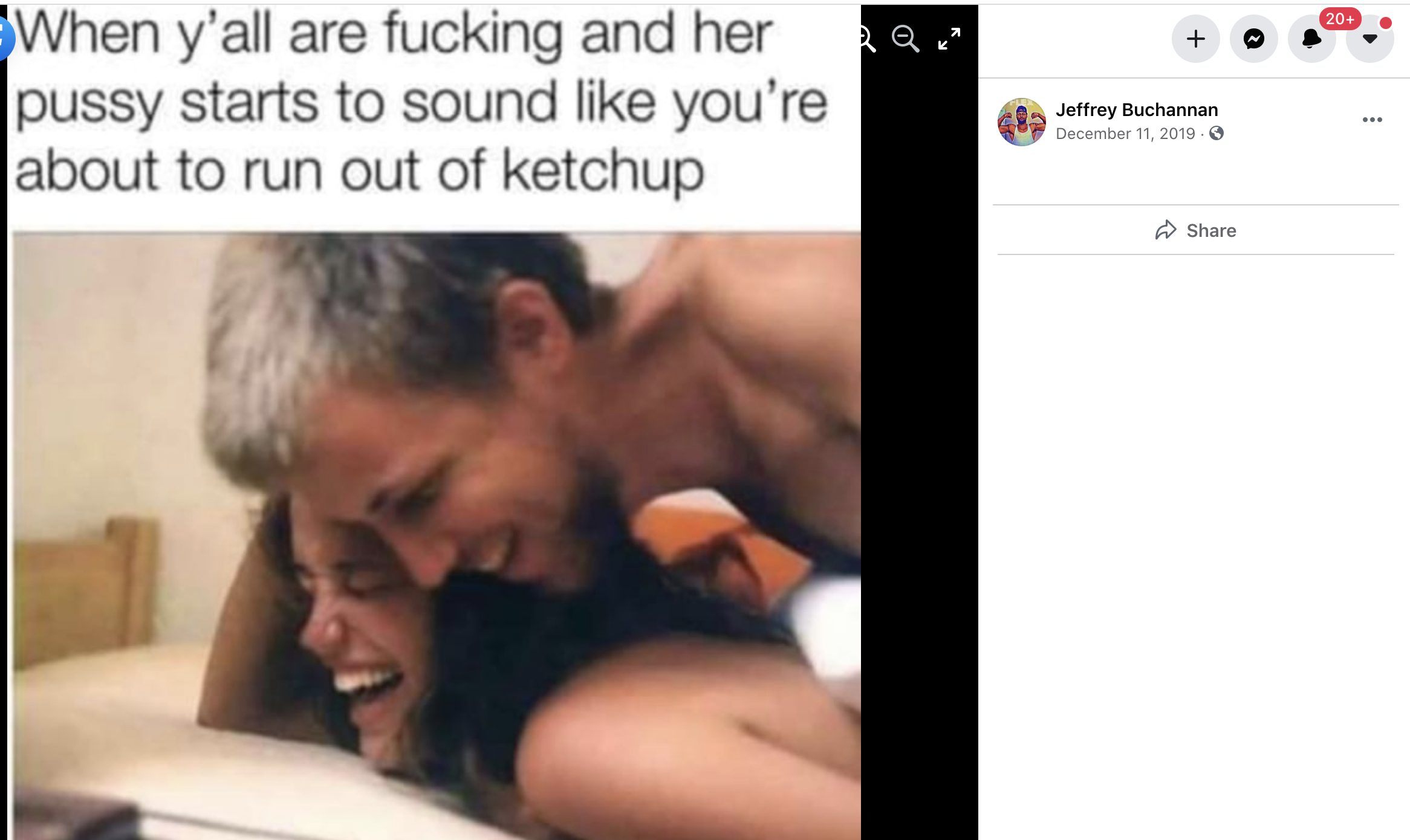 He was also arrested in Lowell in 2007 for a hate crime, in which he and two other friends badly beat a gay man for walking in “their” neighborhood.

According to the Boston Globe, “The alleged assailants saw the man in a residential neighborhood at about 3 a.m. on Friday, and used anti gay slurs before beating him, authorities said. ‘We don’t want you in our neighborhood,’ one of the accused allegedly called out to the man. The three men, Jonathan Artis , Jeffrey Buchanan, and Jules Rugges , all age 19, face three charges: violation of constitutional rights with bodily injury, assault and battery, and mayhem. The victim, whose identity was withheld by authorities, went to police after the beating to describe his assailants. A short time later, police arrested three men fitting the description.”

The Lowell Sun offers another report, from the court hearing: “Police allege that at 3 a.m. on Saturday, James Nickola, 22, walked into the Lowell police station with his face covered in blood. He told officers that three men had begun to taunt him as he walked along Bridge Street in Lowell. They caught up with him on West Fourth Street where he was jumped and beaten while being called a ‘faggot.’ Two of the alleged attackers beat Nickola, while prosecutors say the third man urged them on.”

Yet he remained free. This is a testament to our system, which gives violent, dangerous, repeat offenders like Jeffrey Buchanan the benefit of the doubt time and time again. Yet we are constantly told by BLM and other social justice advocates that we incarcerate too many people, and that everyone in jail is there because they are a victim of circumstances, including racism and socioeconomics.

Rhonda Pattelena has only one picture of her murderer on her Facebook page. According to commenters he was obsessed with her, and this likely was not the first instance of domestic violence.

Rhonda was a victim in every sense of the word, and Jeffrey was the piece of shit aggressor who was far from that.

Well over 1,000 women are murdered every year in this country during acts of domestic violence. That’s an average of three per day. It’s an epidemic that doesn’t get talked about much, so people like Jeffrey are able to remain free.

Yet this summer we were lied to by the media and BLM and told that the biggest problem facing this country was racism, in particular white cops killing unarmed black men. The focus became the unjust way that people like Jeffrey Buchanan were treated, and if you brought up the way that women like Rhonda were treated you were accused of being racist for suggesting that all lives matter.

Sadly Rhonda bought into these lies too, even though she herself was the real victim. She constantly posted on Facebook about white privilege and how black lives are not valued in this country. Keep in mind, a total of 10 unarmed black people were killed by police in 2019, which is less than 1% of the amount of women killed due to domestic violence. I bring these Facebook posts of hers up not as any sort of shot at her for supporting BLM, but to illustrate how warped our country is when the victims consider themselves the oppressors, and the oppressors like Jeffrey Buchanan are considered victims because of the color of their skin. 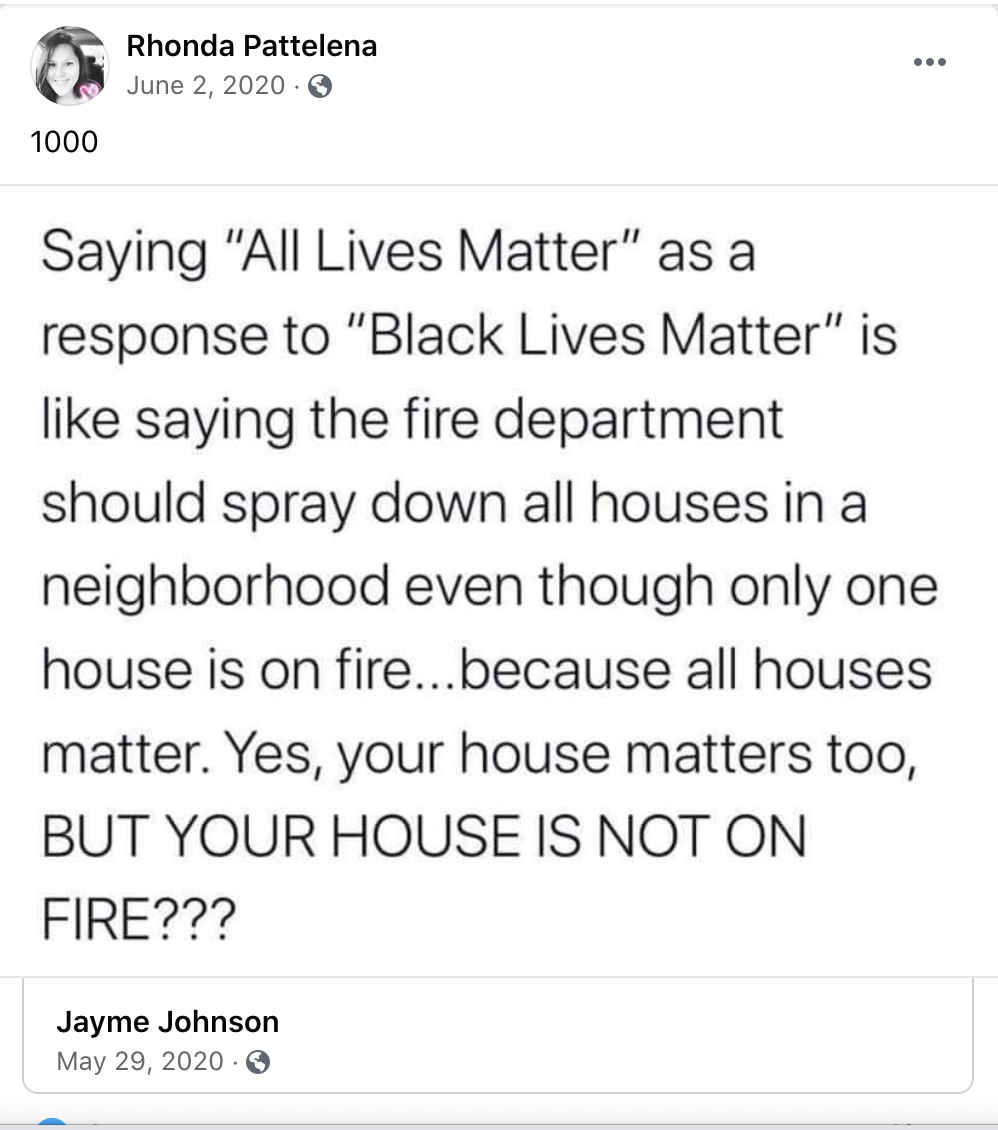 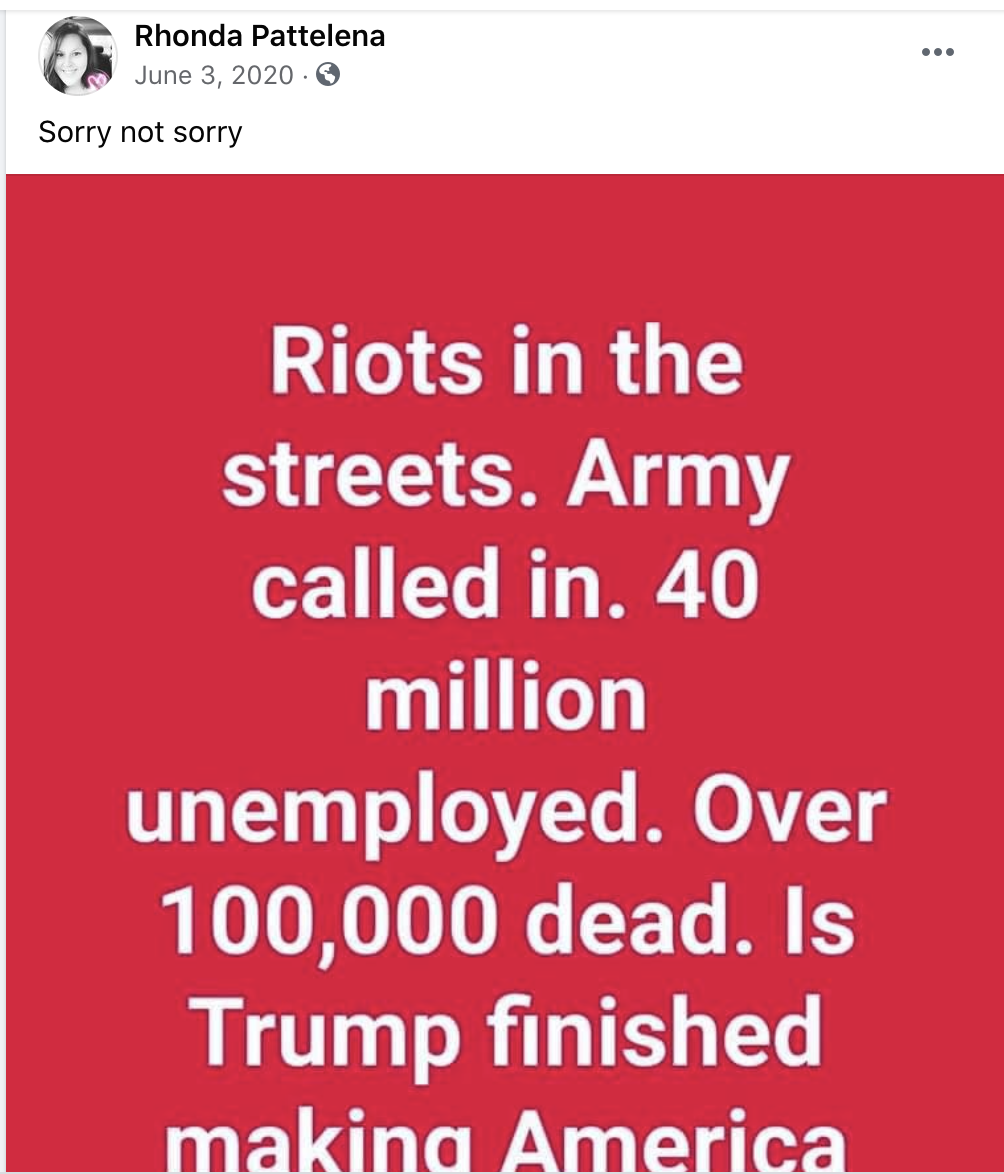 The answer is that they won’t, and there will be no protests. If we were to commemorate every woman killed at the hands of an angry man in their life then we wouldn’t be able to remember all their names. We remember George Floyd specifically because the way he died (unarmed black man at the hands of a white cop) is so rare.

Yet Rhonda convinced herself that she was not a victim because she is white. In several of her posts she even justified rioting as a way to protest the killing of George Floyd. She posted about white privilege frequently, but the reality is that she had no privilege. She was a single Mom with a deadbeat father who thought it was OK to assault her when he got angry.

These two posts hit me the hardest.

People like Rhonda were told that suggesting that “all lives matter,” including hers, was a racist thing to say. We could only acknowledge that the lives of people like Jeffrey Buchanan mattered because of their skin pigmentation. We were told that people like Jeffrey Buchanan were incarcerated unfairly as they remained free despite extensive criminal records. If she had stood up in June and said, “I’m a victim of domestic abuse, my life matters too,” she would’ve been told by woke progressives that it wasn’t her turn to talk. That would just be her “white fragility” talking.

This is the other post that got to me.

She said that she would intervene if she saw a black man being choked by the cops. Yet multiple people saw her being assaulted by Jeffrey Buchanan at a public beach and did nothing to intervene or help her. They just let her die, because her life didn’t matter.

Except her life did matter, way more than Jeffrey Buchanan’s. It mattered to her kids more than Jeffrey Buchanan’s did, as she was actually there for them. And it says a lot about our values as a country when so many women end up like this, but yet our schools don’t send home emails that their lives matter too and the cycle of violence continues. It’s disgusting, and if you’re more outraged about George Floyd than you are about Rhonda Pattelena than you’re a horrible person with shitty values, and I really could care less if this blog offends you.