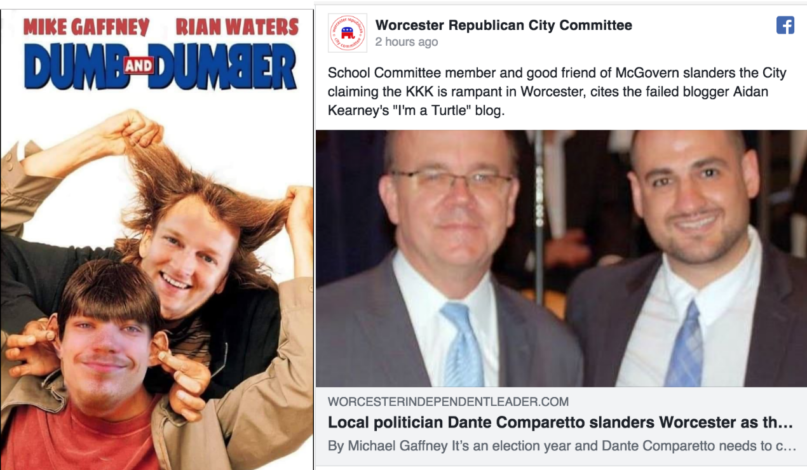 Milky Mike Gaffney went full Turtle Derangement Syndrome yesterday after he published this bizarre blog on his website the “Worcester Independent Leader.” He also posted it on the Worcester Republican City Committee’s Facebook page; a page he still runes even though Milky Mike hasn’t lived in Worcester in over a year after fleeing the Woo when the wife he cheats on got canned at Hanover Insurance. When you get 4 likes, but 3 of them are you and the loyal ginger puppy dog you refer to as a wife.

Check out how often he posts on the WRCC Facebook page. (And DO NOT spam the page with links to this blog!!) Dozens of times on some days, all day long. Which I guess is easy to do when you don’t have a job and your brain is consumed with what you left behind in Worcester. For what it’s worth many in the WRCC including City Council candidate Donna Colorio have told us that they don’t want Mike running the page, but he won’t give them the password. So basically he hijacked it and turned it into a right wing meme-o-rama 24/7. Let’s check out what Milky Mike had to say in his column on the Worcester Independent Leader, which before this blog was published no one had ever read before. He wrote it in response to this blog about his old friend Dante Comparetto, after Dante accused Turtleboy of starting a KKK revival in Worcester. Normally I wouldn’t give Milky Mike the attention he so desperately craves, but he earned it with this blog because it’s laugh out loud funny. Let’s be honest guys, I’m a huge failure. I’m sorry that we built a Facebook page up to 112,000 followers only to be deplatformed by a black lives mattress cheesehog. I’m sorry that we’ve had 38 pages removed since then. I’m sorry that we’re permanently blacklisted from Twitter for being too real. I’m sorry that we only have 30,000 combined followers on Clarence Woods Emerson and TBNews. I’m sorry that so many of you have shown your appreciation and support for what we do by generously donating to our PayPal, rather than having a Paywall like non-failures such as the Boston Globe. I’m sorry that our YouTube channel only has 2,400 followers (you can changed that by subscribing here), unlike the Worcester Independent Leader which has 479 followers. (DO NOT spam that page either!!!) Obviously I should’ve taken advice from the failed lawyer who fled from Worcester after coming in dead last place in a City Council election. The same frosted tipped gentlemen who wasted 10 months of his life flying between Dallas and Uxbridge to sue me for libel, only to have it thrown out once Judge Lemire found out that Mike used to blog for me and introduced him to the First Amendment. The same guy who is now assisting a woman beating dog killer named Rian Waters who is suing us for libel in Springfield. Mike also has been reading the blogs, as he showed he’s up to date about the Charlotte McFarland harassment order, after she threatened to burn my house down with molotov cocktails. “The only candidate that Kearney has endorsed in the past 3 years that won was Gary Rosen.” Also, I’m a “nobody” in the community, unlike Milky Mike who lives 2,000 miles from the community he can’t seem to get over.

Funny though, for an irrelevant blog from a “nobody in the community,” Milky Mike sure does seem to keep up to date on all of our latest blogs. Then he took shots at turtle riders….. So I guess we don’t have any turtle riders in Worcester anymore. Sad.

But Kearney’s Turtleriders are a fun bunch. Kearney is Turtleboy, he even wrote a self-published book claiming “I am a Turtle” or something.

“Hey guys, he wrote a book, I think it’s called I am Turtle, or something. I wouldn’t know because I hardly ever read the blog. I just so happen to know the exact amount of social media followers he has on various channels and I’ve quoted several of the most recent blogs published on turtle…something.”

It’s not like Gaffney sits at his computer all day waiting for me to go live. Also, if you’ve purchased any turtle gear (like Milky Mike has) you are either a homosexual who wants to bone me, or perhaps a heterosexual woman who would like to take a ride on my shell.

Which means if you are a dude, you are riding… yeah, Kearney. And a man wearing his gear is like a chick wearing her boyfriend’s football jersey in high school. But, it’s okay to have a man-crush, Kearney still messages me late at night on his Clarence Woods Emerson account asking me to go out for coffee and continues to obsess over me.

I’ve been taunting him pretty relentlessly since defeating him in court. Of course frosted tips Freddie is pretending that he took it as me trying to take him to the bone zone. The funny part about this is that he knows I’m taunting him, and he knows I’ve defeated him. So all he’s got left in the tank is, “you’re gay.” Ouch. Oh, and finally he took shots at my ma dukes lack of parenting skills….. Keep in mind, when Milky Mike’s mother died he didn’t find out for a week, wasn’t invited to the funeral, and was kept out of the will. So obviously he’s in a great spot to take shots at another woman’s parenting skills.