Patriots Fan Cam Shows Patrick Mahomes’ Stupid Girlfriend Wasn’t In Her Seat At Gillette And Was Texting Most Of The Game, Also Live Tweeted Her Stepfather’s Death I discussed much of this story and Landon Part 4 on the Live show last night if you missed it.

Patrick Mahomes stupid, unemployed, attention seeking girlfriend, who seems to make a living as an “IG influencer” and made up a baseless lie about Patriots fans harassing her at Sunday’s game, is quite the clam. But she’s a dirty liar, according to eyewitness testimony and video evidence that proves that it was her who was harassing Patriots fans and being obnoxious in general.

But we also found something else that proves what a liar she is. Patriots Fan Cam lets you see snapshots of the entire stadium at five different points in the game. The first one was taken with 13:00 left in the first quarter, or approximately 4:30. This is where she was sitting. Try to find her. You can stop looking – she’s not there. Yet right around this time she was whining on Twitter that people were identifying her as Pat Mahomes’ girlfriend (she wishes) and yelling at her for standing up. 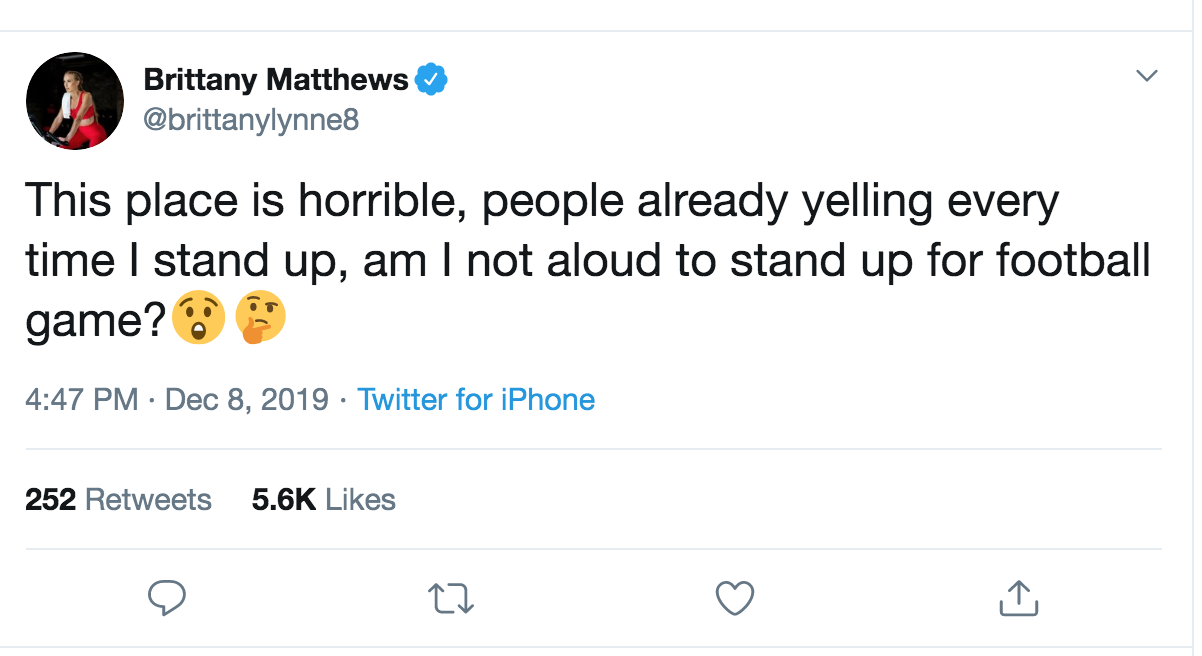 Even though lots of people are standing up in that picture. Both of these are lies, since she wasn’t in her seats at the time, and was likely inside updating her IG filters. Try to find her. Yea, she’s not there again. She’s actually in this one, but look where she’s seating. That’s her on the right on her phone. She’s not even watching the game. Her and her boyfriend’s goofy brother are yucking it up with security, and probably name dropping Pat. But they’re in the last row so it’s literally impossible for them to be blocking anyone’s view if they stood up.

Picture #4 is at the end of the third quarter, and once again she’s sitting on her phone fucking around on Instagram. And finally in picture #5 she’s actually watching the game as the Patriots were coming back, and everyone is standing except for her and Pat’s goofy brother. So why did she make this all up? Simple – driving traffic to her social media accounts is how she plans to make a living while her boyfriend turns them into millionaires. She gained thousands of followers on IG and Twitter, and now she can spam them with stupid bullshit like this:

This is how this chick makes money – Adidas and Lululemon probably pay her to give away gift cards. Like Adidas gives a shit about a $200 gift card. They pay this talentless liar to promote them using her social media, and she’d have zero significance if her high school sweetheart couldn’t throw a football. She makes you follow her to be entered and tag friends so they can follow her too. Then the data mining begins and – BAM – you’re a Instagram influencer. This is literally all blonde chicks have to do to survive in 2019.

Let’s not forget, this is the same chick who shamelessly live tweeted her stepfather’s death last year. Quick, before you die can we have the nurse take a picture of us all holding hands so I can post it for likes on IG?

Hey Brittany, I’m sure you’ve read the blogs by now – I hereby invited you or Jackson Mahomes to come on the live show to discuss why you felt the need to defame Patriots fans. You won’t.