Got an email from a restaurant owner in Braintree called The Brewhouse and felt like sharing it because some assholes need to be publicly shamed.

My name is redacted, I own a restaurant in Braintree. This guy walked in to get takeout last night and called the police because we had more than 25% capacity. I’m struggling to stay in business and keep my family fed with a roof over their heads. Trying to keep my help employed. The Braintree police showed up and tried to tell my manager to get people out and they stayed in the bar.  The police have no authority to do this. This guy lives in my town and this is the crap that I deal with. I just renewed all my licenses and yet I can’t use them to the fullest. 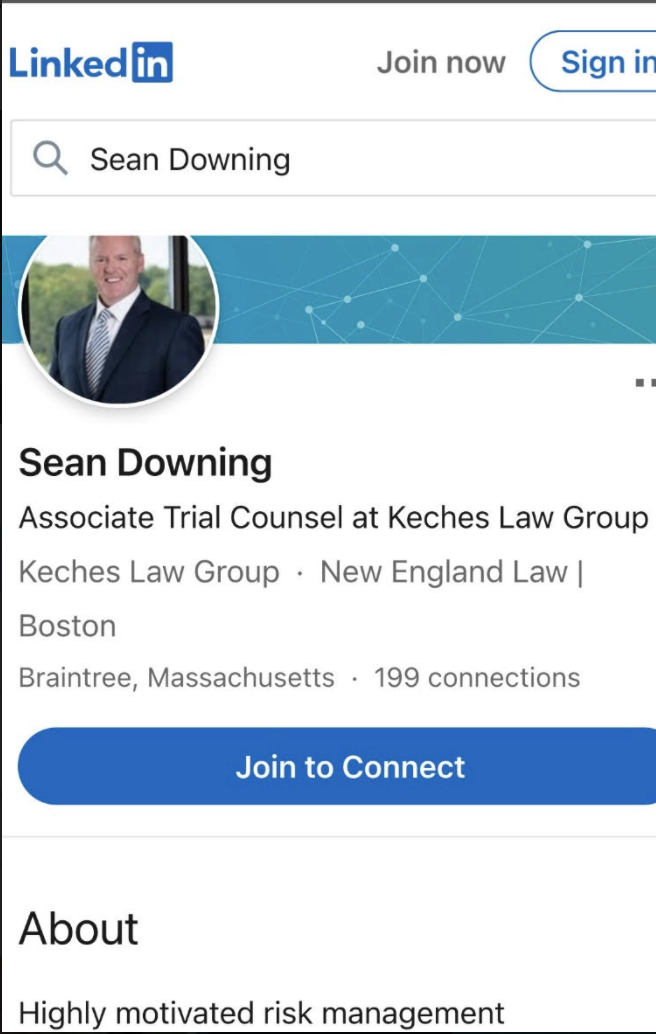 Do you realize what a worthless, soulless piece of shit you have to be to narc on a restaurant that’s done nothing but sacrifice for the last 10 months, because you think they have the audacity to have over 25% of THEIR RESTAURANT filled with customers? These are the same people who pat themselves on the back because they ordered takeout one time and convinced themselves they did their part to save the economy. Meanwhile, guess how much he tipped? Sean Downing has made his money representing healthcare companies and pharmacies, and used to work for Keches Law Group, which appears to be some sort of slip and fall conglomerate in Taunton.

They are currently under investigation by the Attorney General’s Office for accepting kickbacks from a shady pharmacy in return for sending 800 of their clients to the pharmacy to pick up pills that probably could easily lead to addiction.

Attorney General Maura Healey today filed a lawsuit alleging a Massachusetts law firm accepted tens of thousands of dollars in illegal kickbacks from a pharmacy in exchange for referring hundreds of its personal injury clients to the pharmacy. In a complaint filed in Suffolk Superior Court today, AG Healey alleges that Keches Law Group, P.C. engaged in unfair and deceptive acts under the state’s consumer protection law by accepting more than $90,000 in kickbacks from Injured Workers Pharmacy (IWP) in exchange for referring at least 800 clients to the pharmacy without disclosing its financial interest in the referrals or obtaining their clients’ informed consent.

“Lawyers in Massachusetts are expected to follow the law,” said AG Healey. “Clients should feel confident that they are getting unbiased advice from their lawyers, not being steered towards providers that are secretly paying for referrals.”

The AG’s Office began investigating Keches Law Group in connection with an investigation into IWP’s dispensing practices. The investigation into IWP resulted in an $11 million consent judgment resolving claims that the pharmacy violated the state’s consumer protection law by failing to implement adequate safeguards against unlawful and dangerous controlled substance dispensing and by paying kickbacks for new patient referrals.

According to the AG’s complaint, Keches entered a one-year “marketing agreement” with IWP in March 2017 that, on its face, purported that IWP would pay Keches $4,000 per month to link to IWP’s website and promote IWP’s pharmacy services. But internal emails show the true purpose of the monthly payments was to compensate Keches for referring at least 40 of its clients to IWP each month. The AG’s complaint further alleges that Keches and IWP agreed to a second unwritten arrangement in January 2018, pursuant to which IWP agreed to pay for Keches’ social events in exchange for referrals. IWP ultimately paid for Keches social events costing more than $74,000, including an X1 racing event, a yacht outing, and a nearly $24,000 holiday luncheon. Keches’ referrals under the 2017 and 2018 agreements generated more than $1.2 million in revenue for IWP.

The AG’s lawsuit seeks an order from the court permanently enjoining Keches from further violations of the consumer protection law, together with consumer restitution, civil penalties and attorneys’ fees and costs.

Sean Downing’s contribution to society includes once working for a law firm that represents people in court who were injured, suing those responsible, taking their cut, and then sending them to the pharmacy that bribed them without disclosing this kickback to their clients. He adds nothing of value to the world, and if he died tomorrow there are no shortage of scummy lawyers who would gladly do his job for him

Meanwhile, The Brewhouse contributes greatly to the community. They’ve raised over $20K for a family who lost their home to a fire, held a fundraiser for a widow and her two children after their father died suddenly in 2014, they donate to police and fire causes every year, and pretty much any member of their community in need. That’s what they do while Sean Downing sues people and calls the cops like the little bitch that he is because his punk ass is afraid of a virus.

Anyway, I’m glad to hear the cops didn’t do shit. Nor should they. Every restaurant should flagrantly ignore the non-existent laws which the police have no right to enforce, and people like Sean Downing should be named and shamed so that people will think twice about ever being this horrible in the future.