A few months ago I did a blog on Tony Federico, AKA Tony Fed, the unemployed “back the blue” scammer who capitalizes on the death of police officers and attempts to weaponize his “back the blue” Facebook group to win free motorcycles for personal use. 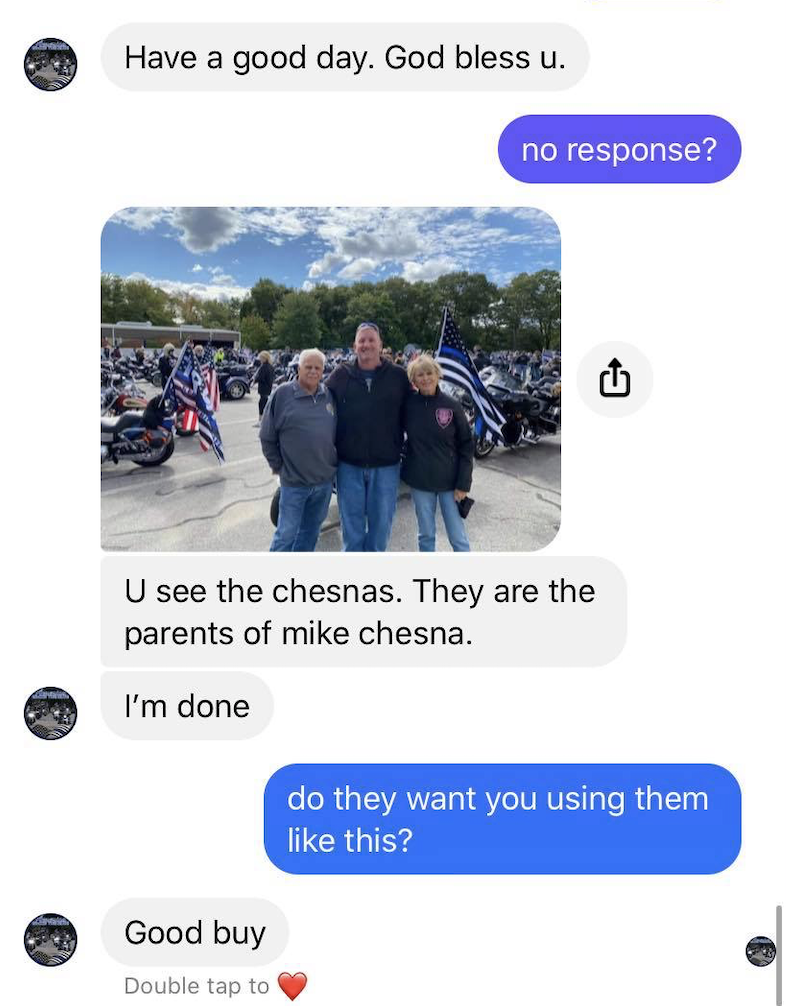 He price gauges his shirts at back the blue events, and then attempts to strong arm people who sell for less.

I had a run in with Tony Fed. He tried to intimidate my wife at a police rally we both were selling at. He was mad my pricing was $10 for a tee or hat and he was at $25. Stood right in front of my wife and was staring her down and shaking his head in disgust. I picked up on it and told him to go back to his table. He reached out to me later to apologize but asked me to raise my pricing if we are at the same rally’s going forward.

Today Tony shared a video on his page in which he filmed himself basically kidnapping a shoeless woman in Quincy who he accused of attempting to steal the back the blue flag he was flying over the highway overpass. Before I show you the video, keep in mind the timing here. He filmed this weeks ago, and he waited until after a Worcester cop died and two Braintree officers were shot before he decided to share it with the world.

I fucking HATE this guy so much. The difference between Tony Fed and me is that I support the police, and he tries to suck their dicks in the hopes it will get him out of a speeding ticket. “Police appreciation week, that’s why we do it.”

Hope they see this bro.

I have no idea who the woman in the video is, what her politics are, and exactly what happened before and after the video was shot. She’s parked the wrong way on a one way street and showed up there to confront him because he allegedly was distracting drivers by waving the flags. It really doesn’t matter what her reasoning is, you don’t take someone’s keys out of the ignition and hold them hostage. Even if I was inclined to not like this chick, I immediately feel bad for her after watching that video. She was degraded because of the way she looked, the way she dressed, and the fact that she was eating a God damn burrito because she didn’t want it to get cold while she was held against her will on a highway overpass.

“We’ll put your ass all over the internet.”

“How’s your muffin? You look like you need one.”

Also, Mr. Law and Order created a dangerous situation by preventing her from moving her car, which was parked the wrong way on a one way, and parking multiple vehicles on that overpass where clearly no parking is allowed.

I’d like to hear burrito girl’s side of the story. She might in fact be horrible, but I immediately had sympathy for her as I watched her standing against her car, unable to move, holding her burrito sadly with that unfortunate outfit on. According to Tony she had her car towed and left in an ambulance.

So just to review, the guy who claims to support police and respect law and order illegally parked 2 cars on an overpass, then kidnapped and held a woman against her will while degrading her, and waited weeks to post it until a cop died and 2 others were shot when he knew “back the blue” mentality would be the strongest.

Fuck this asshole. If you’re supporting his bullshit then you’re just as bad as he is, and you’re no supporter of law enforcement.