Tyrannical Tisbury Police Queef Hires Back School Crossing Guard After Being Shamed For Taking His Guns, Assistant Principal Is Married To The School Resource Officer Update on the story we reported on yesterday about the Korean war veteran and retired cop who was fired from his job as a Tisbury elementary school crossing guard and had his guns and LTC confiscated by an overzealous police chief after a nosy waitress reported him to the cops after eavesdropping on a private conversation at Linda Jeans which she misrepresented.

Public shaming works folks. You fine people read that blog in large numbers and voiced your opinions to the Town of Tisbury. You let them know that this blatant second amendment violation would not be tolerated quietly and you forced them to do the right thing. It was patently absurd that this happened in the first place. Does this man look like he’s a threat to the safety of children?

Only if those moves can kill.

According to the article he had no idea all this outrage was going on because not only does he not own a computer, he also doesn’t own a phone.

The villain continues to be this BLT-123 looking pinhead. “The town, collectively, has expressed an outpouring of concern about Mr. Nichols, and his employment as a school crossing guard. We as well share those concerns. We wish to make you aware that today, Mr. Nichols was informed that he may return to his crossing guard duties tomorrow morning.”

He “may return”? Who the fuck are you to think it’s up to you to grant him the right to return to this job? This guy thinks that rights are granted by him, as opposed to being God given and inalienable. You gave in because you had no choice, and I hope his lawyer sues the fuck out of you and your fake police department.

This is the statement in its entirety. 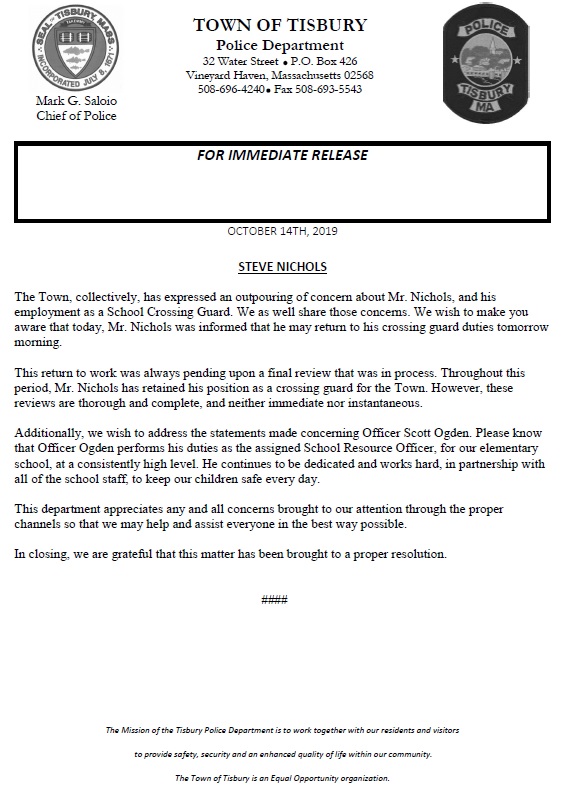 One important fact that’s not being reported is that Officer Scott Ogden is married to the school’s vice principal Melissa Ogden. She heard that an 84 year old man had the AUDACITY to criticize the job her husband was doing, IN A PRIVATE CONVERSATION AT A FUCKING RESTAURANT, and she couldn’t let it go so she conspired with the police queef to violate this man’s first and second amendment rights.

Oh, and the waitress has a child that goes to this school according to the manager, AND she waited two weeks before saying anything, so clearly she wasn’t the least bit concerned about the 84 year old man being a threat.

Just for the record, the concerns that Stevey voiced in a private conversation between friends at a restaurant were completely valid. If the school resource officer is leaving school to go and get coffee then he’s leaving his post.

Still would love to know the name of that waitress though. I’m counting on my Martha’s Vineyard turtle riders to come through on this one. I know you’re out there because I’ve sent books there. Hope to hear from you all soon! [email protected]