Anyone Saying Roger Clemens Didn’t Juice In Boston, Or Shouldn’t Be In MLB Hall Of Fame Is A Fraud We did a podcast the other day at WEEI that will be up later about the Baseball Hall of Fame, but I wanted to briefly talk about Roger Clemens getting into the Red Sox Hall of Fame with Pedro Martinez, and Nomar Garciaparra. A lot of people are up in arms about this because Clemens was a juicer. This is undeniable and anyone who thinks he didn’t is an unequivocal dooshnozzle.

And can we please stop pretending like steroids was invented in 1989 by Jose Canseco? Honestly, how do we know that some of the legends we learned about growing up weren’t on the juice? Like, does anyone think Babe Ruth was above that? The only reason it even became an issue is because McGwire, Sosa, and Bonds took it WAYYYYY too far. Then the do-gooders got involved and we had ourselves a steroid witch hunt. 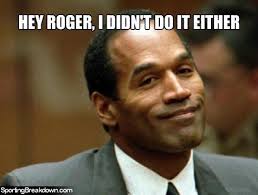 They all did it. I don’t care and neither should you. So why is everyone all fired up about Clemens? Because he lied about it, right? Oh God forbid. Of course he lied about it. What’s he supposed to do? Tell the truth? LOL. Yea, that would go over real well. No one who admits doing steroids will EVER get into the Hall of Fame. Is there undeniable proof that Clemens did it? Of course there is. But when you’re backed into a corner your ONLY move is deny, deny, deny.

Or is it because he played for the Yankees? Because if Clemens juiced his face off into his 40’s in a Red Sox uniform would you really care? Nope. You only care because he kept winning Cy Youngs and winning World Series with the bad guys.

Everyone assumes Clemens started juicing after he left Boston. LOL. Right. Jerry Thornton wrote this the other day:

“My beef with him was and continues to be that he never started using until he left Boston.  His last four seasons with the Sox he was a combined 40-39.  This from a guy who should’ve been in his prime”

Hey Jerry, in 1987-88, Clemens had 32 complete games!!! Thirty fucking two!!!  Fifteen of those were shutouts. He won 24 games in 1986. He threw over 250 innings almost every single season he was in Boston. The fact that you can go nine innings in half of his starts is inhuman. The bottom line is that Clemens juiced his ENTIRE career. But he had to do it for the good of the game.  Do you like watching Clay Buchholz break down every single season? Do you like watching great pitchers like Johan Santana dominate for three seasons, get injured, and then disappear into a sea of anonymity? I don’t. I like watching greatness and so do you.

Steroids were great for the game of baseball, and Clemens was a large part of that. Don’t hate the player, hate the game. Roger should be in. 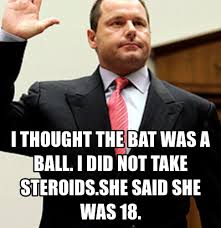