Yesterday we published a blog about how the City of Boston has herded all the junkies into an enclosed cage in the heart of Meth Mile, where they are free to buy and sell drugs without consequence in order to juke the commie cold stats. 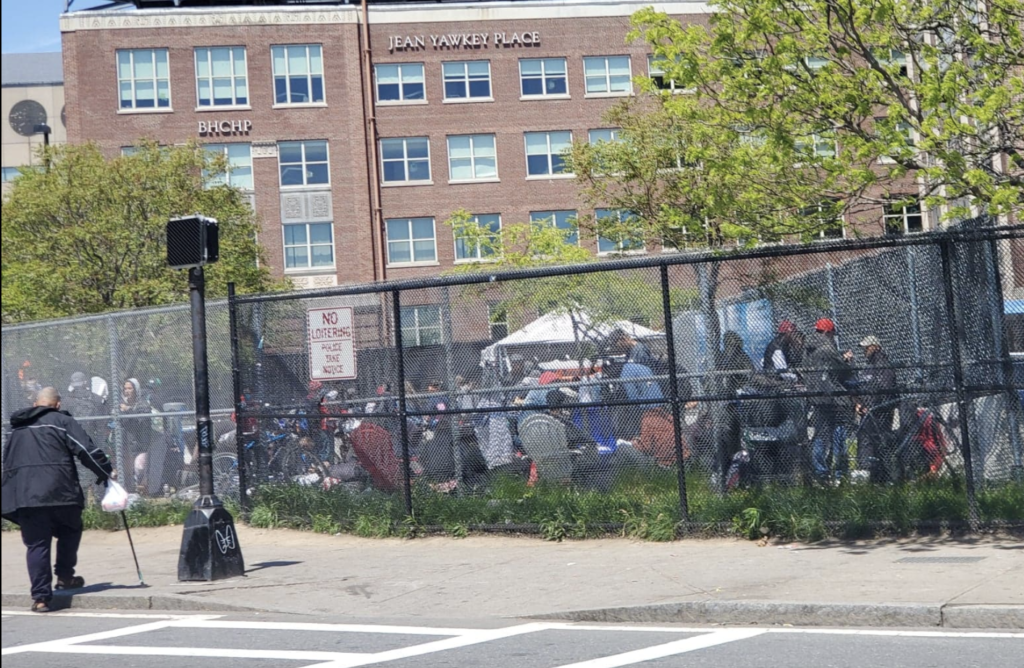 Multiple people have reached out to us to confirm that this is in fact happening, although a Boston cop who isn’t very happy with us thinks that this is a good thing and has since blocked me from returning messages. Oh good, junkies are “grateful” that they have a place they can go to get high around cops and healthcare workers. I really can’t believe a cop is telling me that allowing junkies to get high in a cage is what “working wonders” looks like. Although the fact that she thinks Dan Rather told “straight news” kind of says it all. If there are medical professionals and police officers overseeing sanctioned drug use inside of cages in the City of Boston in order to juke the commie cold stats, then how has this not been reported on?

I attempted to ask her how this was any different from legalization of heroin but she blocked me. I guess we “turned into everyone else” by asking legitimate questions.

Another turtle rider sent us a video from outside the junkie cage and I don’t see any cops inside, but I do see plenty of people without masks ignoring social distancing guidelines.

Here’s a video of the same area before the cages were up, and the only difference is that they’re shooting up inside the cages now instead of outside. Another turtle rider who has family that works with Boston Healthcare for the Homeless tells us that this has been going on for a while on meth mile, but it’s just now happening in the cages.

You should talk to her about what goes on there. Junkies given not only clean needles and a safe place to shoot up, but a substance to safely mix with coke , so as not to cause injury to their veins and heart. Really. Patients dealing drugs on the medical units and being allowed to stay. She had had to call security at night just to leave the building because they’re all congregating outside. She’s afraid to walk through them for fear of being stuck with a needle when they’re so high. Horrifying place.

Unless you don’t have a home, in which case you should sit outside of a hospital, get high, and frighten healthcare workers.

Just a reminder that “safe injection sites” like this are illegal, and US Attorney Andrew Lelling made it clear that any attempt to put them up would be “met with federal enforcement.”

How has no one at the Boston Globe reported on this? This is happening at a major intersection, they basically used the commie cold crisis to legalize drugs, and a Boston cop is telling me that she thinks it’s swell.