I’ve said it before and I’ll say it again – people who enforce imaginary unwritten rules of baseball are worse than bin Laden. Chris Archer just added his name to this prestigious list of dooshnozzles. If you missed it on Saturday this idiot, who pitches for the Tampa Bay Rays, gave up a smash to David Ortiz. Apparently he was all pissy about the way Papi tossed his bat and trotted his fat ass around the bases though. You be the judge:

Here’s what Archer had to say about it after the game:

“I think it was a perfect example of what Price said. All my interactions with (Ortiz) outside of (baseball) — off the field — have been good. But when it comes to him on the field, I don’t know what makes him think that he can showboat the way he does and then nobody retaliate, nobody look at him a funny way or nobody pitch him inside. I don’t know why he feels like that. But obviously, he feels the way David (Price) said he does. He feels like he’s bigger than the game. He feels like this show is all about him.”

First of all, who the hell is Chris Archer and why is he speaking out of turn? Newsflash – when you’re a nobody who didn’t get to watch David Ortiz’ game winning home run against the New York Yankees in Game 4 of the 2004 ALCS because it was passed your bed time, you don’t get to comment on what David Ortiz is and is not allowed to do. He’s a Hall of Famer and you’re Chris Archer. It doesn’t matter if you like the way he flipped the bat. He’s a legend and you’re not.

This would be like Bryan Russell complaining that Michael Jordan was showboating by sticking his tongue out after yamming it down Utah’s gullet again in 95. You can talk shit about people who are equal or below you on the totem poll, but not about legends.

And why is it always pitchers doing this? How come batters never whine when a pitcher pumps their fist after a strikeout? I loved it last week when Mike Trout and Albert Pujols gave Fernando Rodney the business, recreating his dumbass quiver celebration after knocking him around: 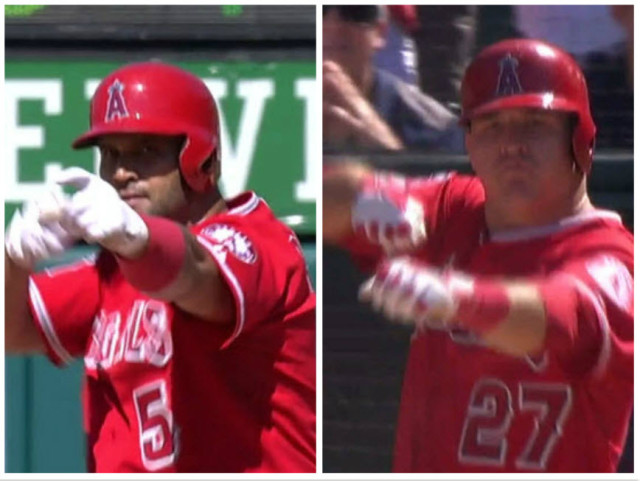 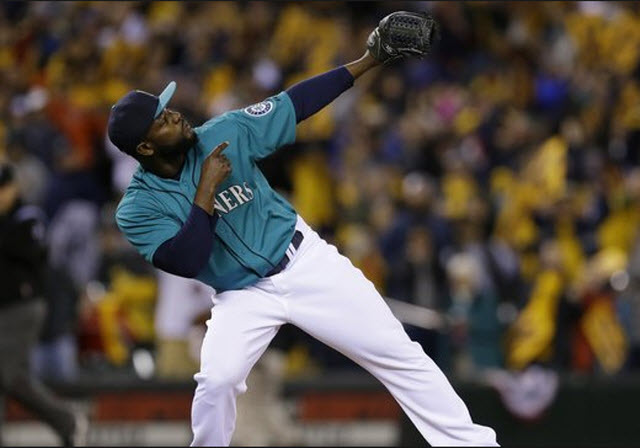 What team did Rodney play for last year anyway? 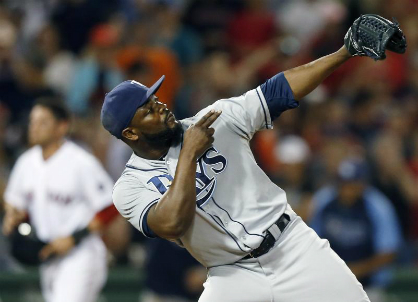 Oh yea that’s right – he was Chris Archer’s teammate. Showboating is a one way street thought right Chris? Like, there was NOTHING wrong with the fact that you did this after striking out Daniel Nava last year:

And guess what you were when you did this to a guy who has been fighting to stay in the big leagues his entire career? A fucking rookie. So in this idiot’s diluted mind there’s nothing wrong with a dooshnozzle rookie staring down a nobody like Daniel fucking Nava and kissing his biceps in a game that his team was LOSING!!! Because that makes TONS of sense.

This all David Price’s fault. He has officially become the biggest turd in the punchbowl in baseball, and he’s the one that started this whining. He’s also another one who has NEVER won anything, yet doesn’t like the way that Ortiz admires his work. Hey guys, we know it eats you up inside that you can’t stop him. But for your sake, just don’t comment on it after the game because you look like losers.

More than anything though I blame baseball’s moronic culture of unwritten rules. Like I’ve said a million times before – they’re unwritten because they’re not real. There’s absolutely nothing in the rules that says that Papi can’t sit there, watch his smash, and toss his bat towards the visitor’s dugout. First of all, he’s making life a lot easier for the bat boy. Secondly if whiny pitchers like Chris Archer doesn’t think David Ortiz should be allowed to watch his home runs and toss his bat, then he should petition the league for a rule change. 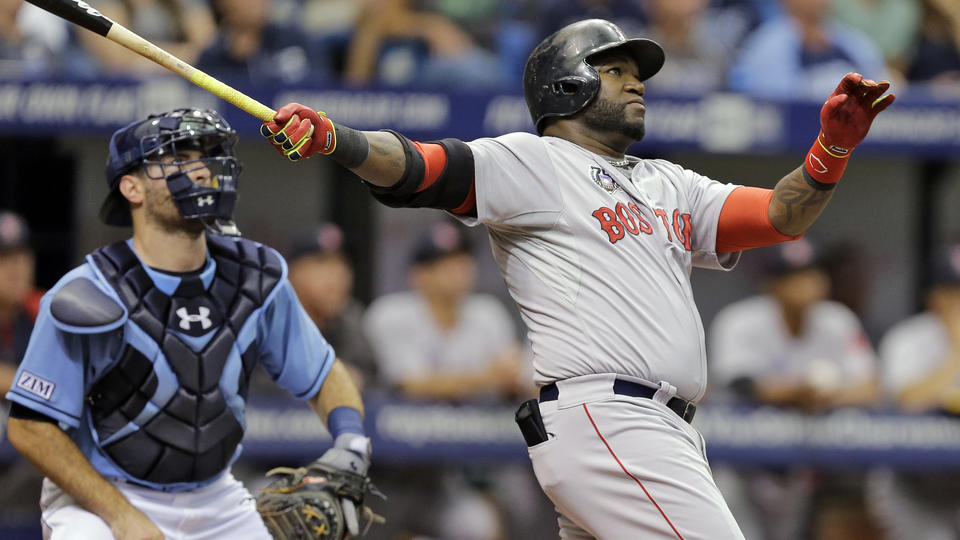 Or here’s a fucking idea – don’t give up home runs to David Ortiz!!. That might stop him from admiring his work. Because you have several options as a pitcher. You can strike him out. You can walk him. You can get him to groundout. But for whatever reason you chose to give him a meatball to smash.

I’m opposed to all losers who complain about the way winners handle their success. NFL teams whining about Pete Carroll running up the score. Diva NBA players whining about not getting a foul call on a clean block. Giving out participation trophies to kids who lose. Don’t wanna be humiliated? Don’t get humiliated. Pretty simple.

We need more of what Ortiz does in all lines of work. Think of how much better all of these performance would be:

Politics, school, and medical drama Tuesday’s would be so much better if I ran the world.

The one negative thing I will say about Ortiz is this. You guys suck. You won the World Series last year. Congrats. Now you suck. It’s OK to showboat like this when you’re in first place, but since you’re not, how bout you just trot around the bases and put Red Sox fans out of their misery? Like, am I supposed to be excited by the fact that we won a fucking game? If I’m Chris Archer, instead of whining about Ortiz why not just point out the fact that the Rays are on fire and competing for a Wild Card while the Red Sox are a joke? At least he comes out of that looking like a winner instead of a Nancy Boy.

That’s not the Tampa Bay way though, so we should get plenty more of this for years to come.