So whoever runs the Detroit Red Wings twitter account tried to be some sort of wise old uncle to some poor puck bunny name Kaylee G, but ended up becoming a giant asshole in the process. Here’s what happened: 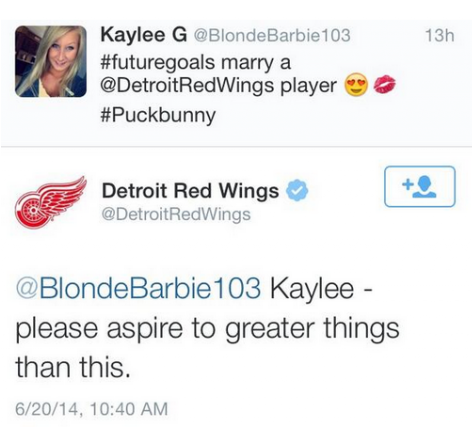 Look, obviously this girl wants to do what 90% of hot women aspire to do in this country – get paid off for being hot. And she’s earned it, because she’s got junior smokeshow written all over her: 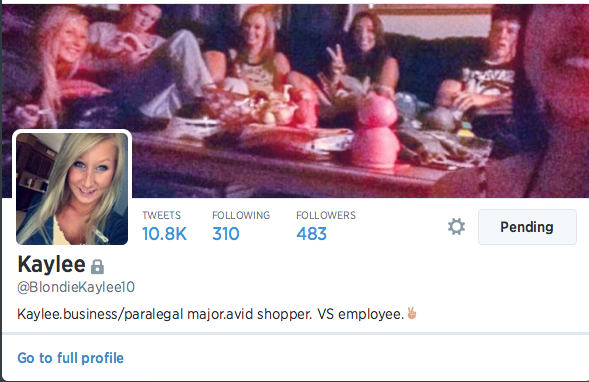 This poor girl is being shamed by assholes all over Twitter for doing aspiring to do what every woman who has ever married or dated a professional athlete has already done. And the Red Wings are all of a sudden the virtuous and caring guidance counselors who encourage hot young junior smokeshows like Kaylee G to do become doctors? They want them aspire to do great things than nail some guy in a Red Wings jersey who may or not speak Englihsh?

How bout go fuck yourself Detroit Red Wings Twitter account. Like, where do these nudniks get off? I’ve never seen Pavel Datsyuk, Hernrik Zetterberg, or Jimmy Howard‘s sidepieces, but I’m willing to bet right now if I google them I will see them with a couple prim looking star gazers, since they’re probably the three most recognizable names on Detroit’s mediocre roster. Lets’ find out. I just googled Jimmy Howard wife, and this is what comes up: 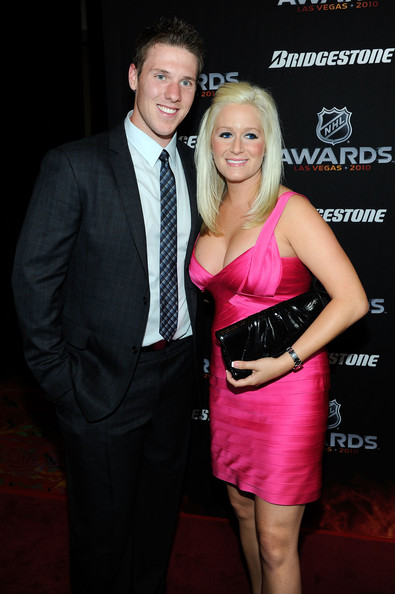 She must be a lawyer. And I’m sure Jimmy is really attracted to her personality and brain. Sure she has gigantic boobies, and looks exactly like Kaylee G will in five or ten years. But I must’ve missed the part when the Red Wings publicly shamed her for doing exactly what Kaylee G aspires to do.

Then there’s Pavel Datsyuk’s reward for being one of the best players in hockey:

This right here accounts for about 90% of the motivation that teenage boys need to practice just a little bit longer than everyone else. You think Pavel here would be bagging this college professor if he couldn’t put the puck in the net? Nope. He’d be working at a ball bearings factory in St. Petersburg.

Wonder if the Red Wings pulled her aside and told her that she could be more than just Henrik Zetterberg’s puck bunny some day. I’m sure they didn’t need to because she likely has a double master’s in chemical engineering and nuclear fission. Thank God these girls listened to the wise old uncle who runs the Red Wings Twitter account. If they hadn’t then they’d never be taken care of and pampered for the rest of their lives merely for being smoking hot.

Oh yea, and where were the Red Wings to warn Zetterberg that his wedding helped him surpass Tom Brady as the most emasculating thing a professional athlete has ever participated in: 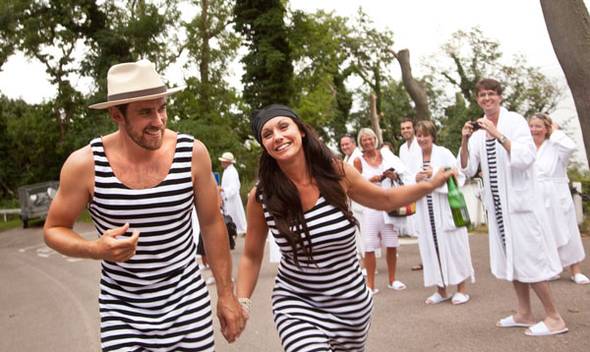 I don’t know if all Swedish weddings look like this, but in America you would never be able to show your face to your friends again if you pulled a stunt like this. I don’t care how much money you make or how hot your wife is, this is simply unacceptable.

Newsflash – every professional athlete who has ever existed and is not named Vince Wilfork has married a hot woman. This is not coincidence. They didn’t all find really smart people with awesome personalities because they’re nice guys. They saw a hot chick and went after it. They thought to themselves “All that hard work and training paid off, cuz now I’m gonna get the hottest chick for a wife.” The hot chick then saw a professional athlete with money, power, and machismo and said, “this is what I always wanted – this is why I went to the gym and threw up after every third meal.” Then they got married, had kids, and he forgot their names because he had a million concussions that went undiagnosed.

So yea, I hope whoever runs the Twitter account for the Red Wings is happy, because Kaylee G had to get rid of her account. I’d probably do the same if people were saying shit like this:

Last thing I’ll say is this – 99% chance the person behind the Red Wings Twitter account is a feministo. Some most likely disturbing looking, gremlinesque creature who hates pretty women because she ain’t one. Keep doing your thing Kaylee G.