I’m still not over UMass’ loss to Tennessee. It was humiliating in every way possible. We finally got a true national audience, and we showed them why they had never heard of us before. I’ve been hyping this team up all year, and they made me look like an idiot. Thanks guys.

The good news is that there is someone out there who is a much, much bigger idiot than I am – Coach K. If you missed it, he said the following when it was rumored that six Atlantic Ten teams would make the NCAA Tournament:

“I’ll get in trouble probably for saying it. I like the Atlantic 10; they’re a really good conference. I hear people saying there are six teams in there. Come on. I mean, they’re good, but put them in our conference and go through the meat grinder that our conference has to go through.”

The Atlantic Ten doesn’t have the top teams that the ACC does. But at least they compete and fight. VCU and St. Joe’s both lost on heartbreakers. Dayton and St. Louis won their first round match ups – over Big Ten and ACC opponents. Only UMass proved that Krzyzewski was even close to forming a cohesive thought, but he likely wouldn’t have a problem with them being in the dance, since they defeated an ACC opponent (Clemson) who beat Duke this year.

Luckily for society Duke legend Christian Laettner was doing the Duke trolling for us all on Twitter yesterday. Here’s what he thought: 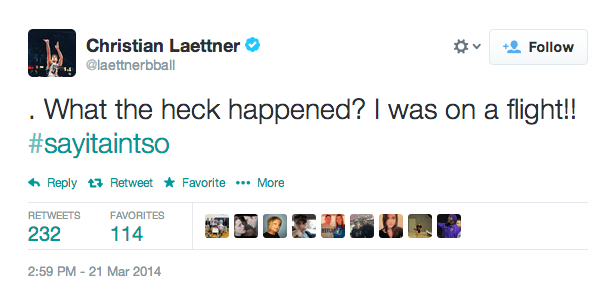 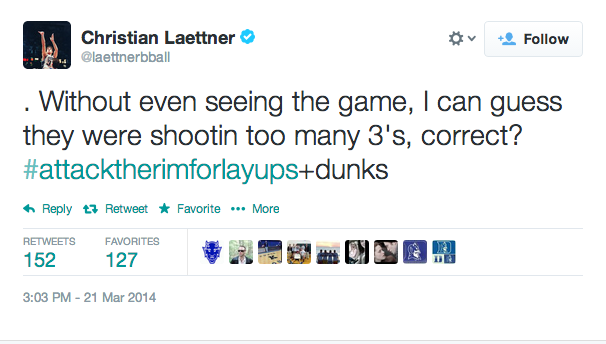 Burn. Absolute burn. And he’s 100% right. You know why this type of crap didn’t happen to Duke back in 88? Because Duke used to be the school you went to if you were a nerd who could play basketball. Duke players graduated from college and went on to become likable NBA players (Grant Hill, Shane Battier), car accident victims (Bobby Hurley), unsuccessful coaches at Oklahoma (Jeff Capel), and assistant coaches at Duke (Capel, Wojo, Jon Scheyer).

Now Duke has officially become Kentucky, the team that Laettner beat with The Shot back in 92. They are a basketball NBA factory, filled with one-and-dones, who have no attachment to the program. Duke used to use players to win National Championships. Now players use them to gain exposure for the NBA.

Now though, I don’t even remember the NBA guys who played for Duke. Who will remember the Duke careers of Kyrie Irving, Austin Rivers, Seth Curry, Luol Deng, Jabari Parker, and Rodney Hood? No one. Because none of them were there for more than a year, and coincidentally, none of them did anything at all in the greatest tournament on earth. That’s largely why Duke has lost in the first round of the NCAA Tournament in two of the last three years, to 15th (Lehigh), and 14th seeds (Mercer).

Your favorite NBA team won’t have any major contributors from A-10 schools. That’s because unlike Coach K’s Blue Devils, they do the bulk of their contributing in college. Say what you want about Kentucky Coach John Calipari urging his players to leave college early to go to the NBA. At least he’s honest.