Let me start by saying that I have nothing but respect for Dave “El Prez” Portnoy. He invented entertainment blogging when he created Bartstool Sports over 15 years ago. He could’ve pursued a career in teaching or used his degree from Michigan to get a better paying job, but instead he started printing out magazines he wrote and handing them out every morning on the MBTA. He built that into a blog and he’s now worth over $100 million.

I’d be lying if I didn’t admit that I looked up to him. He’s done everything that I ultimately want to do. He built his brand by saying things that millions of other people are thinking despite intense backlash from SJW mobs, he refuses to apologize for it, and he delivers it in the funniest way possible.

But I admire him more for being a marketing genius. This is a guy who got a stadium full of people to wear Roger Goodell clown shirts, got arrested for peacefully protesting at NFL headquarters, and just won an auction to watch a MNF game with Goodell only to be denied for failing a background check. I’ve criticized Barstool a million times for selling out and becoming Huffstool, but as far as the content he puts out it’s still good. I’m just personally not a fan of the direction some of his employees are taking the company, but as long as he’s cashing checks then more power to him.

With that said, on tonight’s Barstool Sports rundown El Prez complained about this tweet and this blog at the 10:30 mark.

Barstool Sports spiked blogs from @BlindMike_ and @kirkmin for being too political/controversial. Barstool doesn't do politics. Except when their employees like @holy_schnitt and @BarstoolRia finance domestic terrorism to own Trump. https://t.co/inXnaNx25I

“This guy Turtleboy has been around forever, did a pretty big misquote for us. Saying I spiked Blind Mike blogs and let Ellie, who didn’t even do it.”

Well, he did in fact spike a Blind Mike blog criticizing Trenni Kusnierek for calling West Point cadets white nationalists because they played the circle game. And Barstool did in fact refuse to post a blog with a link to Kirk Minihane’s interview with Donald Trump Jr, even though they regularly let other bloggers put links to their interviews in blogs. Like when PFT interviewed Andrew Yang. Andrew Yang won’t offend people because he’s a liberal, but DTJ will because he’s conservative. One gets put up and the other doesn’t, even though DTJ is incredibly influential and the son of the President.

But his big beef is that Ellie Schnitt didn’t write a blog raising money to bail domestic terrorists from Antifa out of jail, she only tweeted her support for it. 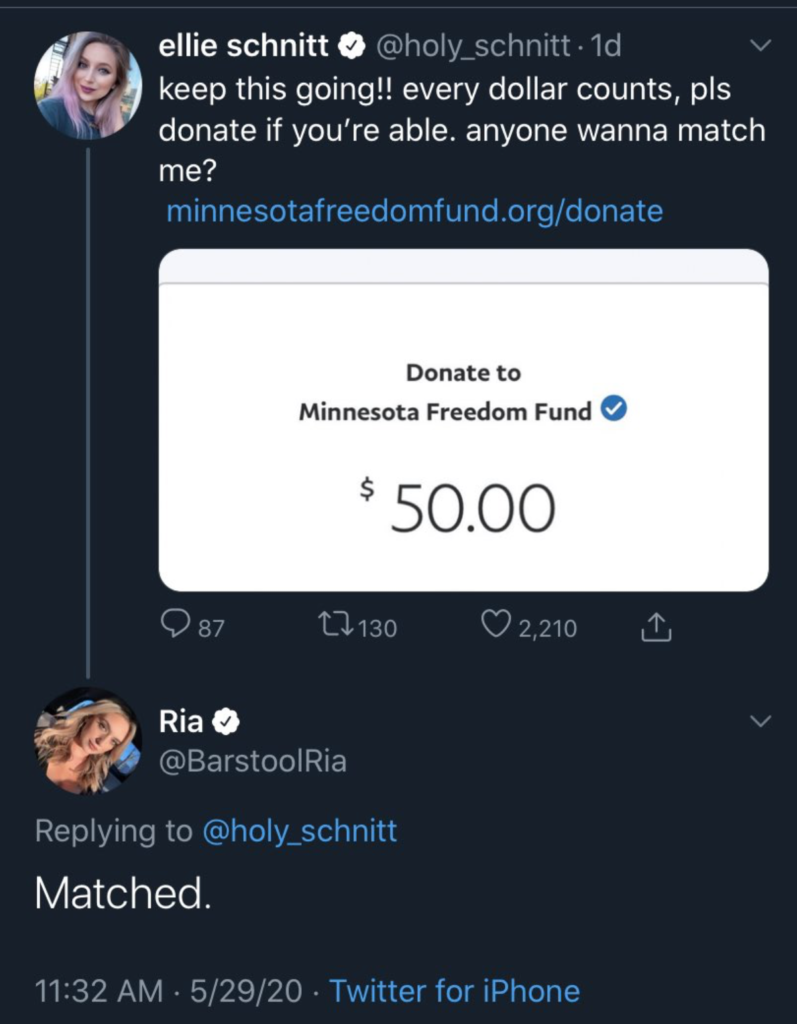 But I never said she wrote a blog about it. I pointed out that she tweeted out support for domestic terrorists, which she did.

And I’m sorry, but when you get your platform from Barstool Sports, and you get the blue checkmark that comes along with it, you are speaking as a representative of your company. Welcome to grown up world on the Internet. You know how many people have lost their jobs because they tweeted some stupid shit?

I recognize that Ellie had a platform and a large following before coming to Barstool, but Ria was literally just some blonde they pulled off the street to bring in a new demographic. She talks about The Bachelor and if she were 15 pounds heavier she’d be a waitress at Perkins. That’s just a fact. She is nothing without Barstool, pretty much any 20 year old chick in New York can do what she does, and because of them she has the ability to tweet out whatever she wants to 250,000 people. Her handle is literally @BarstoolRia. It doesn’t matter if you’re publishing a blog or tweeting it out, you represent Barstool the entire time. After that Dave called into Kirk Minihane’s live stream tonight to air his grievances.

“From this Turtleboy guy who I’ve known about forever, he’s a fucking clown.”

It’s true, he has known me forever. We go way back. Dave should know more than anyone that nothing is done for free. And quite frankly, I’ve overcome a million more obstacles than he has to still be here today.

Barstool Sports has never had a Facebook page or Twitter account taken down. They’ve never been silenced. When he gets sued he doesn’t have to worry about paying legal fees because he’s worth $100 million. His marketing and sales are taken care of by a team, and I hustle solo.

Nevertheless, I still respect Dave, and I would say borderline idolize him. How could I not? I’m a blogger and a podcaster who makes a living saying the things that people think but can’t say out loud. But the fact of the matter is that we do different things. Dave’s earlier blogs that the company was built on were controversial, but his employees write 150 word blogs about Rihanna. I write long blogs, I expose assholes and corruption, I talk about controversial topics, and I investigate things the mainstream media isn’t. It’s a completely different business model.

Besides that he mostly argued with Kirk about semantics, claiming that I misrepresented Barstool by suggesting that they publish blogs supporting domestic terrorist group bail funding, when in fact all his employees did was tweet about it. But then Ria’s podcast today put this out: Barstool’s podcasts are much bigger than their blogs at this point. They have one of the largest podcast networks in the world, so their platform is huge. If they share links in their pods then those organizations are gonna get donations. And look at who Barstool is advocating that people donate to. The Antifa run Unicorn Project, that put out this gem the other day in Minnesota.

“We built this country and we will burn it down.” Antifa news site Unicorn Riot has been conducting on the ground interviews: pic.twitter.com/M6dKgogUvy

“We could have more fires, yea. We have plenty of structures that need burning. We ask our city officials to take down these structures, they haven’t, so we’ll do it for them. It’s easy work, ain’t nothing to it. We built this country and we will burn it down. The dogs need to answer to their masters.”

Reclaim the Block, whose main goal is to “defund the police.” Campaign Zero, which is just an assortment of anti-police propaganda.

The Minnesota Freedom Fund, which is bailing out Antifa and other domestic terrorists who have looted, rioted, and assaulted cops and people attempting to protect their businesses. It says right on their website that they work to get illegal immigrants released from ICE detainment. And finally there’s “Fair Fight,” which is Stacy Abrams never ending fundraiser that she uses to cash checks because she still hasn’t admitted that she lost fair and square, and she will never be Governor of Georgia. I listened to their podcast for 10 minutes and I couldn’t do it any longer. Here were some memorable quotes.

“Why do you need 4 police officers to pin someone to the ground?”

I dunno stupid, maybe ask a cop. Like this one from the Bronx who was nearly murdered by a bunch of assholes who Barstool is raising bail money for.

NYPD Cop attacked in the Bronx. I guess the critics will now say he overreacted. NYPD Cops defend yourselves, you are alone! pic.twitter.com/424w5bZbC6

“Ria and I are upset, we’re sad, we’re frustrated. It feels wrong to talk about anything else.”

Oh fuck off. You’re upset? You’re sad? Here’s an idea – grow the fuck up. None of you frauds actually cares about George Floyd, and you certainly don’t give a shit about Ron Tarentino, Sean Gannon, Michael Chesna, the 5 cops in Dallas who were assassinated by a BLM protester, or any other police officer or business owner that’s been assaulted or killed by these assholes.

“This has now happened so many times.”

A grand total of 41 unarmed people were killed by cops in 2019. Nine of them were black. This has not happened “so many times.” Ya know what has happened hundreds of thousands of times during that same time though? Kids have been getting raped. Why don’t you raise money for them instead? But of course that would actually require reading, instead of getting your news from the blue checkmarks you choose to follow on Twitter.

“As white people we do not have the right to dictate how these protests go forward.”

This is Barstool Sports. Newsflash – you absolutely have the right to ask rioters and looters to cut the shit. I know you’re young, stupid, and ridden with white guilt. But your gender studies professor lied to you.

“Fran and I acknowledge that we are white, we are privileged, we will never fully relate to the struggles that people of color face every single day.”

You’re not privileged because you’re white, you’re privileged because you’re hot chicks. Everything in life will be handed to you as long as you don’t get fat. You don’t know what it’s like to be a person of color because people of color are not a monolith. They all don’t think and feel the same way, and it’s pretty racist of you to suggest they do.

“We will stand up for what is right.”

Be more basic. You can’t.

“We’ll work on ways to be anit-racist, instead of just not be racist.”

At that point I turned it off.

So yea, I still have all the respect in the world for everything Dave has done to get where he is today, but I was 100% right. Without him even knowing it, his company has become a radical left wing rag that raises money for Antifa and other domestic terrorists. He can try to say it’s just tweets, but clearly it’s not.