Family Starts $1 Million GoFundMe After 7 Year Old Dies In Fire, Turns Out Dad Lit A Cigarette With A Blowtorch And Had Court Order Not To Be There Tragic story out of Buffalo that has a twist to it:

A seven-year-old boy is dead, and two people were rescued from a house fire at 59 Benzinger Street. The fire broke out shortly before 3:00 A.M. Monday morning. 2 on Your Side was told there were eight people inside the home at the time of the fire – two adults and six kids. Fire fighters found seven-year-old Anthony Conti in the kitchen. In a press conference, authorities say he died of smoke inhalation.

Our Emily Lampa spoke with Anthony’s father, Joe, who owns the Benzinger Street home. He says there is no insurance on the house – but that structure is only a secondary loss for the family that lived in this home.

“One thing I lost…one thing,” Joe Conti said. “We got five out of six of the kids out, one we couldn’t get. I just feel like I failed him […] He was the sweetest kid you could ever meet. Hugged mom a thousand times a day, told her he loved her. He was just a good boy. Great boy. Just a sweet boy. The school loved him…he was just an all around amazing kid.”

As far as how the fire started, it’s still not clear. After the flames were put out, we’re told fire fighters went back into the house and helped the family pick through the rubble to find items that could be salvaged. Anthony’s brother, Angelo, told 2 on Your Side he was allowed back in to try and grab some things, but all he could find were some boots and shoes for his sisters. So they really are depending on the generosity of the community to get them through this tough time.

Buffalo Council member, Richard Fontana, says the Conti family has strong roots in the tight-knit Lovejoy community, which is why there has already been such an outpouring of support. A small bear, by the tree out front of the home, the first of many tributes for little Anthony. And for the family, baskets and bags of donations coming into the designated drop off site, the Mead Library on Ludington street, police stations and the Hennepin community center are now accepting donations — for the Conti Family. 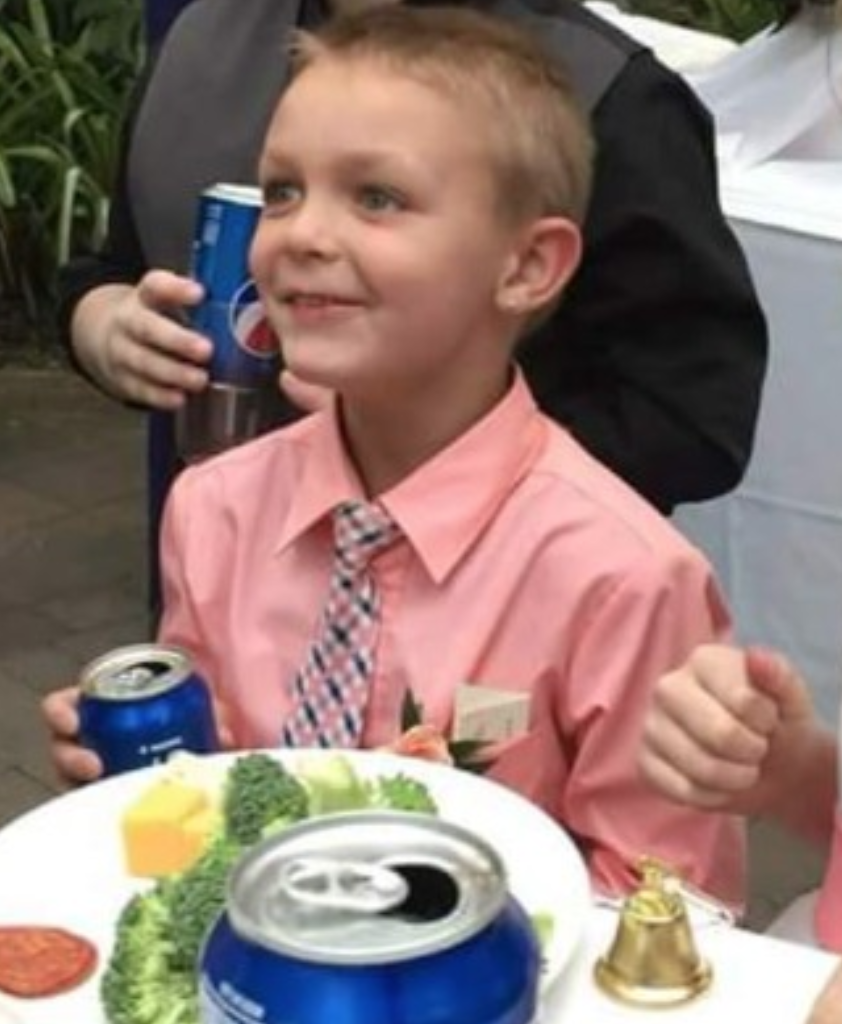 According to the explanation they lost an estimated $275,000:

My name is Amber Conti, I’m from Lovejoy in Buffalo, New York. My family just lost my 7 year old brother Anthony to a house fire, and we are suffering.  This boy is now an angel. Even though no amount of money can buy back my little man’s life, we lost an estimated $275,000 (as told by channel 4 news). A six bedroom house in Buffalo costs less than a car. Tells you everything you need to know about how many people wanna move to Buffalo.

Nevertheless far be it from me to cast judgement on a family that’s just suffered such a horrible tragedy.

Since the fire the Dad, Joseph Conti, has been all over the television doing interviews in front of the house:

Joe Conti said his son Anthony was the sweetest kid a father could ever hope for. The 7-year-old was pulled from a house fire on Benzinger Street and pronounced dead at the hospital.https://t.co/uDdQytZjO8 pic.twitter.com/zyO9CwUflc

Standing in front of the charred remnants of his house on Benzinger Street Monday, Conti’s face was red, peeling and covered in blisters.

“I failed him,” he cried as neighbors wrapped their arms around him.

“No, you didn’t,” the neighbors replied.

Just hours earlier, powerful flames shot through the top of the house as firefighters battled the raging fire in below-freezing temperatures. Conti described the chaotic scene he encountered shortly before 3 a.m., saying he had just come out of a bathroom when he saw fire in a first-floor bedroom.

But he could not.  Conti said he had to flee the house without saving his son because of the smoke and flames.

“I was inhaling toxic, black smoke,” Conti said. “I was getting burned. I was breathing the fire in my nostrils and my throat. I couldn’t stay in there.”

A neighbor comforts Joe Conti whose 7 year old son Anthony died in a fire in Lovejoy this morning. “I failed him,” he said crying. Friends around assures him: “no you didn’t.” pic.twitter.com/Qxu6yfjUIr

Personally, if this happened to me, the last thing I’d be doing is talking to the media or starting a GoFundMe. But to each their own. It’s just a red flag in my opinion.

On the face it seems like Conti is a tragic victim here. And he did lose his son, which is awful. But it turns out the whole thing was his fault:

News 4 was told Joseph lit a cigarette with a blow torch at the home on Benzinger St. before putting the blow torch on his bed.

The mattress caught fire, and the fire spread throughout the house.

“Sure enough, I go in my room, and my whole room was blazed, and I just started trying to put the bed out,” Joseph said. “I tried putting blankets over it and I — there was just nothing I could do. I was getting burned. I was inhaling flames.”

Sources confirm an active protective order against Joe Conti. One source tells Channel 2 the order requires he stay away from his wife and kids. Another source claims, BPD investigating whether Conti being at the house the night of the fire is a violation of the PO @WGRZ pic.twitter.com/noGd7jQVSR

Who doesn’t light a cigarette with a blowtorch at 2:30 in the morning and then abandon the house before grabbing all the kids? I’m sure the 7 year old would find his way out after being awoken in the middle of the night to a cloud of smoke.

Oh, and Joe Conti wasn’t even legally allowed at the house either:

Joseph Conti, the Buffalo man whose 7-year-old son died in a fire on Benzinger Street on Monday, was barred by an order of protection from being at the home, according to a Buffalo City Court official. If Conti had obeyed the order of protection, he could not have accidentally started a fire Monday in the home. Conti could face additional charges for violating the order of protection, said Kait Munro, a spokeswoman for Erie County District Attorney John Flynn.

The six-month order of protection was issued Jan. 18 to protect Conti’s wife, Lisa, according to a Buffalo City Court official. It was issued because Conti, 53, was arrested on New Year’s Eve and charged with second-degree harassment, a violation. He was accused of spitting on and arguing with his wife, according to court documents. The order of protection was scheduled to expire on July 17, unless it was modified or vacated. There was no indication either action had taken place, the court official said.

Conti was scheduled to appear in the city’s domestic violence court on Tuesday on the harassment case, but he did not show up, according to Munro. Judge JaHarr Pridgen rescheduled the case for Feb. 6. Conti also had been wanted on a warrant issued Dec. 22 on misdemeanor and traffic violation charges, according to court records.

Joe Conti talks about his 7 year old son Anthony that perished in the family’s Lovejoy home that was destroyed in overnight fire. 14 year old Anglo, on the left, was one of six kids that made it out safely. @WGRZ pic.twitter.com/adGPKxKZW1

Yea sorry, something is up here. This story has it all – immediate media whoring hours after a tragedy, a $1 million GoFundMe, lying about the value of the house (no insurance?), initially lying about the cause of the fire, people who use blowtorches to light cigarettes, trailer trash lifestyles (Dad spitting on Mom, skipping court dates, having warrants, etc), court ordered violations that Mom seemed to have no problem with, and another fire at the same house in 2004. I’m not saying this was an insurance scam gone wrong, because I’d like to believe that was the plan they wouldn’t do it while the kids were sleeping in the house, but something’s up here. Either way, I wouldn’t trust this GoFundMe.

The bottom line is that Dad is not a victim. He’s the reason his son is dead. I don’t feel sorry for him, I feel sorry for the kids. Their sibling is gone because Dad is a fucking idiot. Should he go to jail? Depends. Part of me thinks he’s in his own personal hell which is sufficient punishment for me. But part of me also thinks he’s a scumbag who should be held accountable for being somewhere he wasn’t  supposed to be, and a kid dying as a result of that.