A turtle rider emailed us and told us to Google “Smuglypuff.” So we did, and what we found was amazing. Not sure how it possible not to know about this already.

So a couple weeks ago in Toronto a conservative Canadian provocateur named Lauren Southern attended a protest to support people who did not want the government to force them to call transgender people the ridiculous pronouns they demand to be called. There’s a professor at the University of Toronto named Jordan Peterson who has become a target for social justice warriors because he refuses to be forced into calling them whatever pronoun they demand to be called. For the record, Turtleboy is 1,000% with them. Fuck you and your stupid pronouns. I will call you whatever the fuck I want to call you. Know why? Because I can. And you can call me Cuntface McGee, and that’s just fine too. The day the government mandates what we call each other is the day we completely surrender our freedoms to Big Brother.

Anyway, the SJW tranny patrol showed up in full force to let these protesters know that their advocacy for free speech would not be tolerated. And in classic SJW form, this DUDE with lipstick assaulted Lauren Southern on camera. But it was not the real star of the video. The real star emerged afterwards in the form of this oompa-loompa looking thing in the yellow knit cap, who the internet has named “Smugglypuff”:

“Quit smiling at me bitch – what you want?”

That’s all it takes to get assaulted by the tolerance crowd. A smile. They have no tolerance for smiling. Keep in mind, this is a person with a penis, who just assaulted a woman because she smiled in public. This is why the whole “transgender” thing is a joke. It’s pure fictional bullshit that everyone fell for. Just because you call yourself a chick and you put on some lipstick and ugly ass earrings, does not actually make you a chick. You cannot assault other chicks just because you think you’re one of the girls now. You’re still a dude, and you’re still a complete pussy for hitting a woman.

Now, you would think that the SJW’s would come to the defense of a woman who was assaulted by a man in broad daylight. But you’d be wrong. Because SJW’s don’t really like women. They actually hate them. It’s why they support woman-beaters like Moses Dixon, and politicians like Hillary Clinton who have shamed victims of sexual violence for the last 30 years. The only kind of women they support are the ones who subscribe to their twisted ideology.

That’s why it was hardly surprising when this thing with a vagina voluntarily came forward and told the cops she “Din see nuffin”: 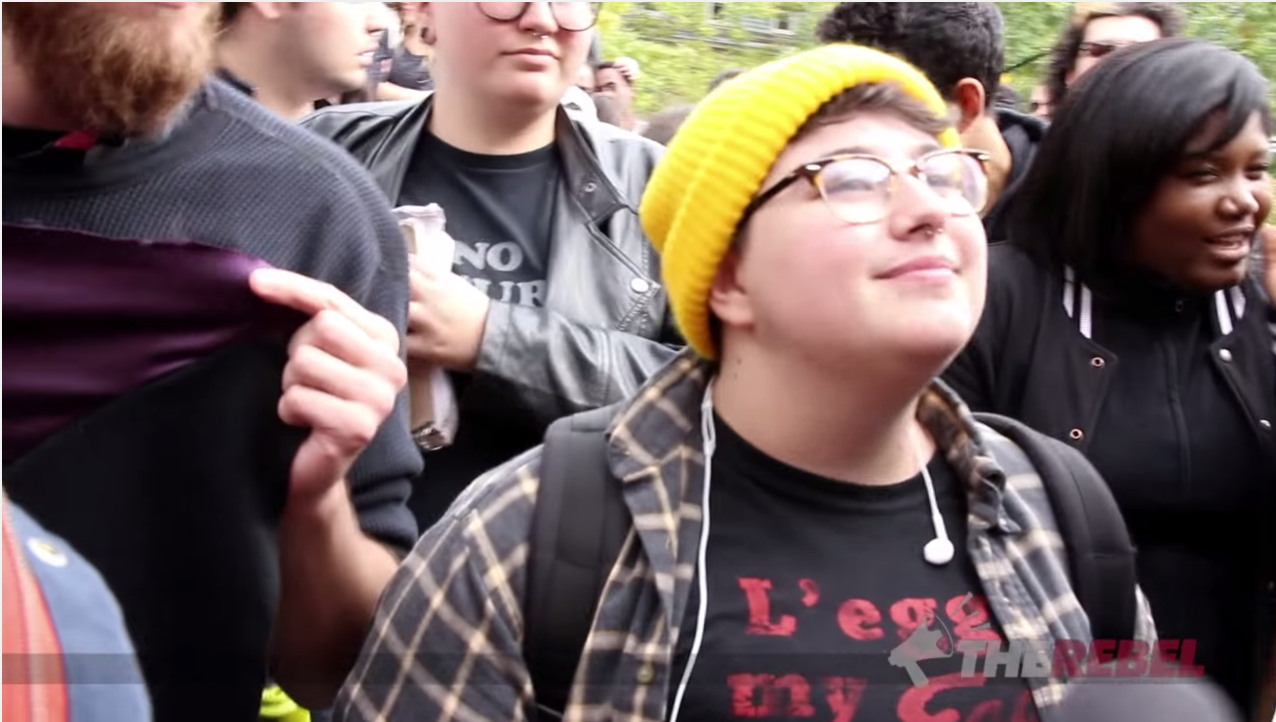 Holy shit, it’s Eric Cartman. I know I’m pointing out the obvious and what was already probably been pointed out a million times already, but her friend looks like a goth Jeff Goldblum tranny who just did a semester abroad in a remote Tanzanian village. Speaking of “abroad,” does Smugglypuff even know how cameras work? Like, we all saw it. She smiled smugly directly into the camera that taped the entire incident. Plus, no one even questioned her about it. She just came forward and said that no one got assaulted without being asked if anyone was assaulted. Kind of a dead giveaway that you just saw someone being assaulted.

Here’s the reality – Lauren Southern is hot and these people are all ugly. That’s the root of why they’re angry. These people are just vile looking creatures, and they’re miserable because of it. So they need to find some sort of identity, which is why they take up “social activism,” stick shit in their noses, and dress like emo kids from 2008. They think they get to dictate what other people can and cannot say because they’ve been getting away with it for so long. So when people like Professor Peterson and Lauren Southern come along and destroy them with facts, their only defense is violence. Ya know, because of tolerance.

P.S. Toronto sucks. It really is a terrible place. A six pack of Molson there costs $14. There’s five billion people there, 90% of which are assholes. I went there a couple years ago thinking it was gonna be like Montreal except way better. It’s actually much worse and way less fun.

Double. P.S. If you really want a popsicle headache then watch this video of a tranny mob yelling at Professor Peterson.