Turtleboy has been very outspoken about the confederate flag issue in the past. You can read about it here, here, and here. Our take is simple – it’s a flag that represents an imaginary country that only existed in the minds treasonous pussy terrorists who declared war on America which led to the deaths of 650,000 Americans and the death of the greatest president in American history. No publicly funded institution (like the South Carolina statehouse) should be flying that flag. But if you wanna be a moron and convince yourself that you’re sticking it to the man by putting one on the back of your truck, then that’s your right. That’s why this story from Masslive really grinds my gears. Excerpts from the article are italicized and Turtleboy’s rational thoughts follow in bold.

Masslive: A veteran Greenfield police officer is under scrutiny for allegedly displaying a Confederate flag on property he owns in Greenfield.The officer has been identified as Sgt. Dan McCarthy, commander of the detective bureau and the Police Department’s official liaison to the town’s Human Rights Commission.

The Confederate flag hanging on a wall inside McCarthy’s Shelburne Road garage is visible to passersby when the door is open, according to Rod and Lindel Hart, McCarthy’s neighbors and the concerned parents of Hugh Hart, the couple’s adopted 10-year-old son, who is black. Critics of the police sergeant have taken to social media to voice their disapproval, and the Harts are leading the charge. 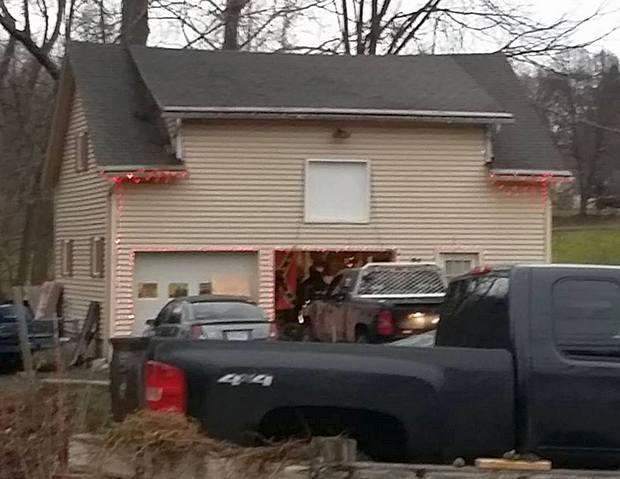 It’s absolutely INSANE that this is an issue for this police officer in Greenfield. It’s his house and he can fly whatever flag he wants to fly in there. Maybe he’s a Civil War buff who collects memorabilia. None of my business because it’s in his garage.

Rod Hart, in a Facebook post Monday evening, wrote that Greenfield Mayor Bill Martin stopped by the family’s home to “shake our hands and to hug Hugh and … let him know that he is committed to making Greenfield safe for all.” The father said he was “touched” by the mayor’s gesture, characterizing the visit as “unexpected and kind.”

“Hugh could not believe that the mayor actually visited HIS house,” Rod said. “I honestly believe that this simple gesture really set Hugh’s mind at ease. Very cool.”

Martin said he discussed the flag issue with Haigh on Monday, and both men agreed that Haigh would educate McCarthy on the department’s code of conduct, according to The Recorder. “The code says that no behavior should reflect badly on the department or town as a whole. I would say something like this does,” Martin told the Greenfield newspaper.

Seriously? This is how police officers and private citizens are treated by the Mayor of Greenfield? They get spoken to in order to “educate” them about political correctness? What planet am I living on? Then again Franklin County is basically a bizarro hippie paradise. It’s why so many of their towns ended up on Top hippie towns list. The Mayor more than likely represents the will of the people up there.

Rod Hart said his son “has become increasingly aware of police antagonism against young black males and is understandably worried” about the Confederate flag hanging in McCarthy’s garage, which is “easily viewable from the street when his garage is open.” Rod said Hugh has even wished for “Santa to bring him white skin … so he won’t get shot” when he leaves home.

Nope. That’s a lie. I’ll bet you my world famous Nantucket horse ranch that this 10 year old kid did not wish that Santa brought him white skin for Christmas so he wouldn’t get shot. That’s just a lie that these two assholes made up to dramatize this whole situation. Because 10 year olds don’t think about the cops killing them on their own. Adults are the ones who teach them that cops are the bad guys. And this is the sort of nonsense that Rod and Todd have been posting on Facebook: Hugh’s parents said they have always told their son that Greenfield is a safe place, that the Police Department “is a benevolent brotherhood of peacekeepers.” But after seeing McCarthy’s Southern flag, the family’s view of cops as peacekeepers has changed.

“Now I have no way to convince my 10-year-old son that his neighbor is not a racist, redneck cop,” Rod said, wondering how a police officer could display a Confederate flag when he has “a 10-year-old black boy as a next-door neighbor.”

You have no way to convince your son that your neighbor isn’t a racist, redneck cop? First of all, why is it OK to label him as a racist and a redneck? Why is it OK to publicly demean people who you know nothing about? Your entire assessment of this guy stems from the fact that you’re spying on him and you jumped to the conclusion that the confederate flag in his garage means that he likes to kill little black boys for sport. This is what’s wrong with PC America. You can call someone a racist or a redneck and everyone’s fine with it, but everyone else is off limits.

And since Dad seems unable to come up with a way to convince his son that his neighbor isn’t a racist redneck, allow Turtleboy to help you out with that. Here’s what you could tell your son:

“Yes son, that’s a confederate flag. It’s a battle flag that the South used during the Civil War. They fought for lots of reasons, but the most important was the issue of slavery, which the south wanted to keep. They were in the wrong because slavery was a bad thing. We don’t know why he has that, but it’s in his own house and it’s not hurting anyone. We wouldn’t like it if someone looked into our home and judged us because it’s important to respect each other’s privacy. That man is a police officer, and if you were in a car accident, or you got beat up, or robbed, he would be the first one to help you out. He would give his life for you because he is brave and has a dangerous job.”

Nah, fuck that. That’s too responsible. Lets fill our 10 year old sons brain with fear and hate instead. That way he can grow up to be a miserable, anti-police radical like us.

And whatever happened to just talking to your neighbors? These pretentious DOOSHNOZZLES look into their neighbor’s garage and see something they don’t happen to like, and instead of just addressing it with him directly, they go to the press, the mayor, and the chief of police? How has it come to this? Why not knock on his door and tell him about your concerns? Maybe it’s all just a big misunderstanding. Nah, screw that. Let’s try this one in the court of public opinion instead.

What happened here is that Dad and Dad are all in on the black lives matter stuff. Just check out his most recent Facebook post: I think he meant Michael Brown and Eric Garner. But then again, facts are obviously irrelevant to this poopsmooch because all of the people he just listed either assaulted police officers or actively resisted arrest. So long as Hugh doesn’t grow up to be a criminal, his interactions with the police will be limited and positive. I mean, “I’m more afraid of my son being shot by a cop than by ISIS??” Who says something like that? Who tells their kid that cops are more dangerous than an international terrorist organization? How much of an asshole do you have to be?

To make matters worse it turns out this guy is a middle school teacher in Northampton. He posted this on Facebook not too long ago:

How is this appropriate? A teacher groping a half naked picture of John Cena in his classroom and then posting on Facebook about how he can’t teach because he’s too turned on by it. This is OK, but a guy with a confederate flag inside his garage that you saw while you were spying on him isn’t OK and that cop is worse than ISIS. Makes sense.

Because in PC America it’s OK for public servants to publicly shit all over Jews, Catholics, and any other religion they want. It’s not hate speech if you’re demeaning people who have faith, but a confederate flag in your neighbor’s garage won’t be tolerated.

And it’s OK for his students to go on his openly public Facebook page and see that this is what he is thinking when he looks at them:

This is OK? The Northampton Public Schools are just COOL with this? I’d love to see people bombard the administration at JFK middle school to let them know that their teacher looks at his 8th graders and says, “Shut the fuck up.” Here’s a link to their contact info. The bottom line is that Rod Hart represents everything that is wrong with society. If his neighbor had an ISIS flag in his garage, he wouldn’t even care. Because as usual, the tolerance crowd shows that their tolerance only exists if you align with their worldview.

And his poor son. He’s the real victim here. Here you have this kid who has an opportunity to grow up in a predominantly white community and learn to get along with people who look differently than him. And what do they do? They fill his head with propaganda and hate and teach him to learn how to become a victim. They are raising him to think that it’s OK to call your neighbor a racist and publicly humiliate them. They’re raising him to obsess about the issue of race, as opposed to just getting along with everyone you encounter. They’re raising him to judge a book by its cover and rush to judgement when in doubt. They’re raising him to hate cops. And as a result poor Hugh is on the road to be the next in a long line of whiny, lifelong victims.

Worst of all is that I feel like Rod and Todd want a cookie for having a black son. Like they’re doing this huge service for the world. But at the end of the day they really wanted to adopt a child of color so they could use him in a prop for their radical, anti-cop agenda.