It has come to our attention that one of the posters mentioned in this blog was being sarcastic. We believed they were being honest, since it’s really not that much different from what the other people listed here were saying. His sarcasm then was obviously top notch. That being said, what he wrote was wildly hilarious in this context, and we kept it up. If he wants it down we will honor that request.

So apparently there is a school near Los Angeles called Pomona College, which is a haven for traitors, communists, rabble rousers, dooshnozzles, nudniks, morons, idiots, stooges, jagoffs, and many more equally misguided people.

Pomona College is a very selective, very diverse, and very expensive liberal arts college. What this means of course is that it’s filled with a bunch of rich kids who hate America and will end up blaming banks when they’re $150,000 in debt and working as a social worker.

Pomona College has three fraternities. One of them allows both men and women, which in most places would make it…..ummmm…..not a fraternity? But since gender is no longer a real thing and you can just pick your gender in 2014, I guess it makes sense. One of the others is Kappa Delta, and they’ve been the center of controversy recently after announcing their “United States of Ameica” themed party. 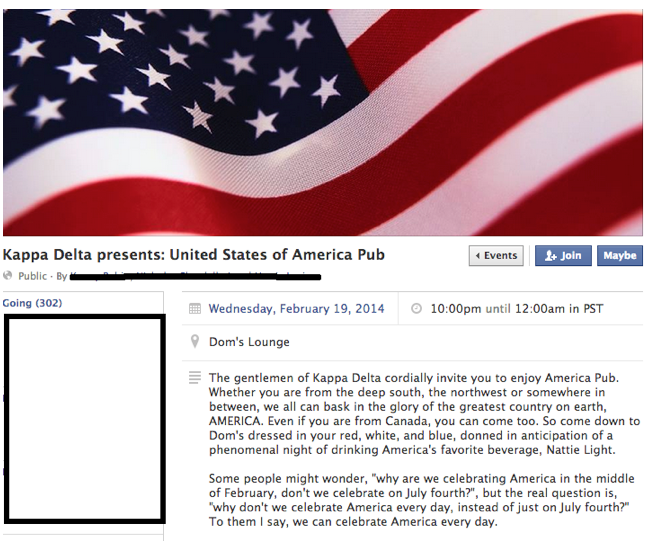 Sure, some of you probably think this is a harmless party and an excuse to get drunk at 9:00 AM Pacific time while watching the American hockey team kick the shit out of David Krejci and old man Jagr’s Czech Republic.

But apparently you are all missing the point here. Luckily Pomona College is filled with tons of undergrads who have access to wikipedia and have discovered that this party is in fact a racist celebration of American imperialism, sexism, and genocide. These obviously enlightened individuals have declared jihad against the Facebook wall promoting this party.

Check out some of these brilliant free thinkers: 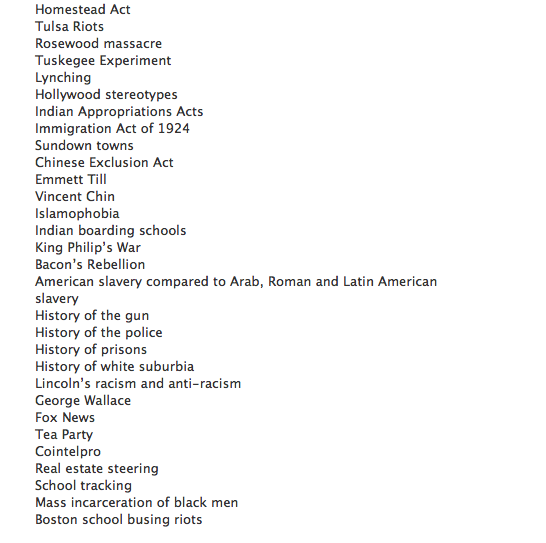 Oh snap, someone googled “Howard Zinn”!!! Here I am watching the U.S. play hockey and rooting for the red, white, and blue, and it turns out the whole time I’m really celebrating the Trail of Tears and King Phillip’s War. Never mind that King Phillips War and Bacon’s rebellion happened before the United States even existed. That’s not important. What IS important is that you should never watch a hockey game and root for America because in 1862 Lincoln signed the Homestead Act. THAT is what really matters here people.

I went to UMass so I was used to people like this. I almost forgot how hilarious their hippy ways are. What’s really scary is that he’s probably being taught this stuff in class. Just shitting all over America because we had Jim Crow laws and slavery a long time ago. Sure, he could point out that America fought a war that ended slavery, passed legislation ending Jim Crow, and fought a World War that ended the reign of the biggest racist of all time (some guy named Hitler). But  then college hippies like Todd wouldn’t be able to focus their hate on the country that allows them to express their idiotic opinions in such a public forum.

Screw hockey, I’m going to the teach in with this guy:

Luckily for society Todd is going to change the world as soon as he graduates. Just look at his major:

Yea you imperialist bastards, you better do EXACTLY as Matt Karkut tells you to or else he’s gonna post a Facebook status, and you’re not gonna like it very much at all!! And if that doesn’t work he’s calling the cyber police who will likely arrest all of you for watching a hockey game and rooting for America.

Matt brings up some good points too. When Betsy Ross was making the American flag, she could’ve picked any colors she wanted. She passed on purple, the color of tolerance and love. She didn’t wanna pick Brown because even though it celebrates American diversity, it’s also the color of poop, which of course is trademarked by St. Bonaventure.

Nope, she went right for Satanic red, heterosexual wedding cake white, and masculine blue. In all seriousness though, where do these hippies come up with this shit? I literally laughed out loud when I read his origins of the American flag.

Matt is obviously very well read though. He saw on Facebook that there was a genocide in Rwanda in 1994 and Sudan much more recently. But those places are like a MILLION times better than America. Sudan is known for its respect of all human rights. And they have great wifi connection there so Matt will have no problem blasting American imperialism on Facebook from Darfur.

Poor Matt says he can’t afford to buy the plane ticket to Rwanda/Sudan (same thing right? Africa), so he’s obviously depressed that he has to stay in America and play in his hipster band:

Just look at those glorious hippies in their natural environment. They’re a wonder to see, they really are. Showering, shaving, and watching hockey are so overrated.

But I’d like to start a gofundme page for Matt. I want him to be able to go to Sudan and enjoy their sweet delicious freedom and tolerance. The poor guy is being restricted by his college tuition though. He needs your help people!! Send this guy to Darfur now!!

My girl Chelci also wanted to chime in about this outrageous celebration of hockey:

Yea guys, your party might be taking place at the exact same time as a hockey game that everyone will be watching, but the theme should be Black History Month. Because in February, this is all anyone should be thinking about at all times. Even ask my girl Chelci.

Not to be outdone, our girl Anna……something….had a mouthful: 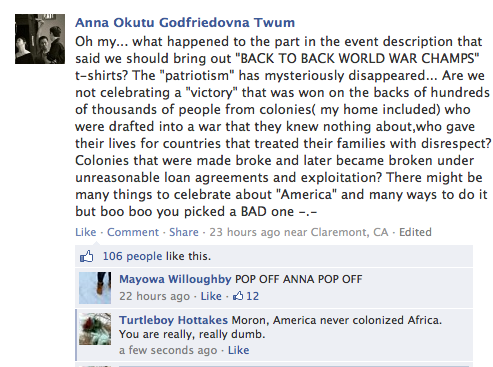 Yea you jingo bastards!! Stop celebrating the fact that America saved the world from Japanese and Nazi takeover!! Obviously we should’ve just let Hitler do his thing. I’m sure when Hitler finally took over Africa he would’ve treated all the people there with respect and dignity. After all, the Fuhrer was known for his tolerance of non-Aryan peoples.

Anna is apparently from Aburi, Ghana. The fact that she can afford to travel the world and attend an expensive private university in southern California, doesn’t change the fact that she’s an oppressed individual still suffering the effects of imperialism. Sure, she’s a member of the Ghanian 1%, but that can’t get in the way of the facts here people. As you can tell from her profile pictures on Facebook she is clearly still struggling with the effects of Allied victory in World War 2: 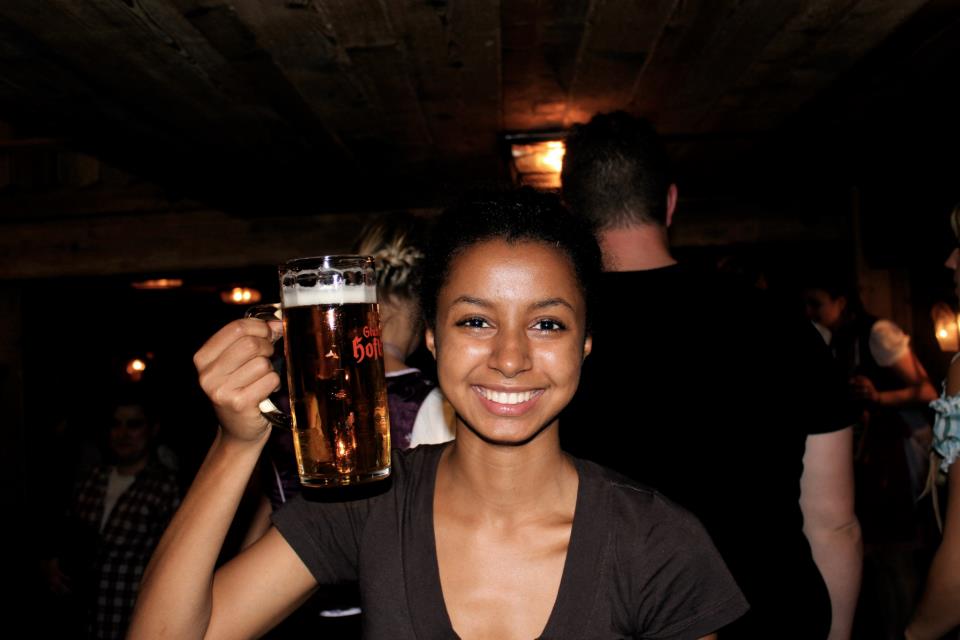 Not to be outdone, another reader came along with a really hard last name to pronounce, which means of course that she is diverse and you’re not:

Michelle brings up some good points. Nutjob terrorists who stone women to death for learning, also hate America. They think we’re ignorant and self centered because we encourage stupid things like “democracy,” “healthcare,” and “education.” By rooting for America to beat the Czechs in a hockey match you are making terrorists hate us even more. Obviously we should be concerned with the feelings of terrorists at all times, since we’re basically internationally bullying them. TurtleBoy Sports frowns on bullying in all its forms.

Gotta love these hippies who hate when America is called the “greatest country on earth.” It just boils their blood. Sure millions of Mexicans and others from all around the world risk life and limb to come here through both legal and illegal channels. But these people don’t know how good they have it in Mexico and Nicaragua. If only they read Michelle’s Facebook post. Then they’d realize that they were better off just staying where they are and making friends with the local drug lord.

Most importantly, stop calling the USA “America.” America is a land mass you nudniks, not a country. I’m sure Michelle is also equally outraged that the Netherlands’ teams are called the “Dutch.” But as for now, we should all be focusing on saying United Staes of America, instead of taking the easy way out.

Who’s feeding her all these hot takes about the evils of America? TurtleBoy may have found the root cause of her anger:

Then there’s Ethan Grossman, a self-described benefactor of white-Jewish privilege from Atlanta. Before you read what he wrote, please understand that this is what you’re dealing with:

Because obviously this kid knows much more about the world than all of you. Allow him to educate all you racist white oppressors:

America obviously perpetuates white supremacist institutions. We are such racist bigots that we elected a black President. Twice. Oprah, Will Smith, and Kanye West are barely getting by under the blanket of white oppression.

Sure your frat might think they’re just getting together to watch a hockey game, but what you’re really doing is celebrating Japanese internment during World War 2.

Yes, America is playing the Czech Republic, a country that conspired with the Nazis during World War 2 and gave up all their Jews to Hitler without any resistance. But rooting for America is a million times worse than rooting for the Czechs, because…….the Alamo.

You guys at Kappa Delta “BETTER CHANGE THE GOD DAMN EVENT THEME”, or else Ethan and his progressive army are gonna be down there to MAKE you do it. Well, at least as soon as he’s done with his nap:

Well, as I write this the United States of America is up 4-1. It looks like we’re going to move on and play what will most likely turn out to be Canada. But when you’re rooting for the red, white, and blue during their next match, just remember what these inspiring 19 year olds have taught you: you are celebrating racism, slavery, the Mexican-American war, genocide, and every other terrible thing that has happened in the history of the world.