So here at Turtleboy Sports we wanna write about whatever our readers wanna read about. The spicier and more controversial the better. So if you ever have a story you want us to consider then send us an email to hottakes@yahoo.com or just message us on Facebook. It’s good for days like today when parents aren’t trying to ransack their children’s school bus.

A Turtleboy Sports rider send us some pictures today from a college they didn’t wanna mention for fear of being a pariah on campus. But you can bet your bottom dollar that the women at this college do not shave their pits. They also may or may not like Blarney popcorn. All you need to know about the place where these pictures were posted, is that the bathrooms there don’t have male or female designations because gender norms are transphobic. Instead the signs say, “With urinals” and “Without urinals.” Unfortunately for my source, she was taking a massive dump in the “without urinals” bathroom and had to show her face in front of two bros who laughed at her flatulence whence she emerged from the stall.

Here are the pictures of what was posted in the student union. Apparently these are things that people say regularly, which are unbeknownst to the person saying them, extremely offensive. 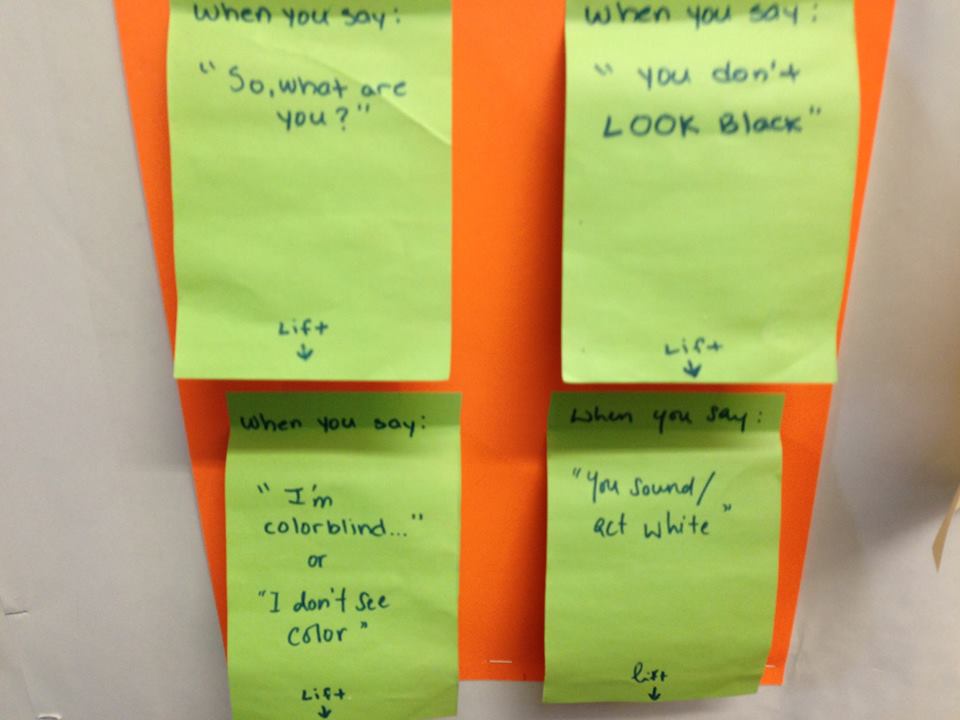 When you lift each one up you find out why the well-intentioned things you’re saying are in fact offensive to hipster beatniks who find EVERYTHING offensive. For instance, you see that one in the bottom left hand corner that says “When you say: ‘I’m colorblind or I don’t see color’.”? How could anyone take offense to this statement about not judging people by the color of their skin? Simple:

Oh I see. When I say that I choose not to view people as their external phenotype, I am in fact saying that brown people make me “uncomfortable.” That’s EXACTLY what I meant to say, but I just couldn’t figure out a better way to express my racism. And white people don’t have a race. They are “race less.” Nothing racist about that right?

Then there was the tab that said, “So what are you?” When I ask that question to someone, I might THINK that I’m just curious about someone’s cultural background. But little do I realize that what the other person is hearing is, “You look different from me because you are non-white and I want to identify you as such.” Fucking weird that someone would ask another person what their country of origin is, right? Well, except when you’re filling out every application you’ve ever filled out and you have to check a box that indicates what race you are.

Well unfortunately our source didn’t take pictures of what was under all of these. But he remembered what they all were and transcribed them for us. Here were some more:

Let’s start in the top left. “When you say: You’re saying pronouncing that wrong.”

Now to most normal people this would be viewed as a helpful thing that someone with a solid grasp of the English language can do for someone who is new to this country. Turns out we were WAYYYY off. The correct answer was: “You sound foreign and should adapt to white culture.” Because when someone completely fucks up a word you should embrace that and throw them a diversity parade.

How about that “You’re so articulate” quote. Sounds like a nice compliment to tell someone who is well-spoken. But sill me – I only see it that way because I’m a bigot. A politically correct enforcer of social justice hears, “I’m surprised you can pronounce words as they are supposed to be pronounced because you are not white.” Yup, silly me. Here I was thinking that English is a language with rules and proper pronunciation.

And who hasn’t told a black woman that “You’re* hair looks so nice and so tame! How do you get it to look like that?” Because I say that to black women ALL the time. Of course I should’ve realized that when I say those words, the person on the receiving end of that hears, “Your hair looks normal and white like mine.” Which is essentially EXACTLY what I told my African-American friend.

And when I ask someone “Where are you REALLY from,” I am actually saying, “You sound weird – you should sound more American.” I thought I was just curious about where you’re from and wanted to make some small talk. Nope. Clearly a rational person can only hear what a xenophobic dooshnozzle I am.

Then there’s these ones:

Let’s start in the top left again. I hate it when men say, “I’m feeling emotional, it must be my time of the month.” What man HASN’T said that? What you’re actually saying is, “I’m a misogynist who equates women’s feelings with her menstrual cycle.” Because everyone knows menstrual cycles don’t affect women’s behavior. Ever.

And when I “assume a POC (person of color) is attending school only because of a scholarship/some type of aid,” I’m like a gigantic racist for assuming that affirmative action is a real thing that exists.

And who among us hasn’t asked a random black dude on the streets, “Can you show me the latest dance moves?” Because I find myself walking through downtown Worcester, and when I come across ANY African-American person, I will instantly stop in my tracks and ask them to show me how to Douggie.

Now some of you might be saying, “Hey assholes, stop being so ultra-sensitive and always looking to make a federal case out of everything.” But none of you are enlightened members of academia. You probably think that if you’re born with a penis then you’re atomically a dude too right? Cisgender asshats. Sure people could just calm the fuck down and not assume that everything straight white men say is filled with malice, racism, and sexism. But then the “I’m offended” crowd won’t have anything to do all day so they’ll have to get real jobs and pay taxes.