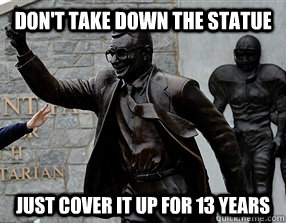 Former New England Patriots offensive coordinator, and Penn State tackle football coach Bill O’Brien recently made headlines with the way in which he left the Nittany Lions for a new gig with the NFL’s Houston Texans.

O’Brien was hired to coach in Happy Valley in the wake of the Jerry Sandusky child sex abuse scandal. It wasn’t an ideal job to take, but Penn State hadn’t been spanked by the NCAA yet at the time. Shortly after accepting the job the NCAA handed out what most normal people think was a fair, if not lenient punishment. We could debate the merits of the punishment all day long, but it’s really simple when you get down to it. At Penn State football became bigger than Jesus. It became TOO big, and had to be protected at all costs. Thus when Joe Paterno found out that one of his coaches was diddling kids on team facilities and didn’t immediately run to the police, he was protecting the program’s good name. Anyone who thinks that Joe Paterno isn’t a complete scumbag piece of shit who is rotting in hell is either delusional, or even worse – a Penn State fan. 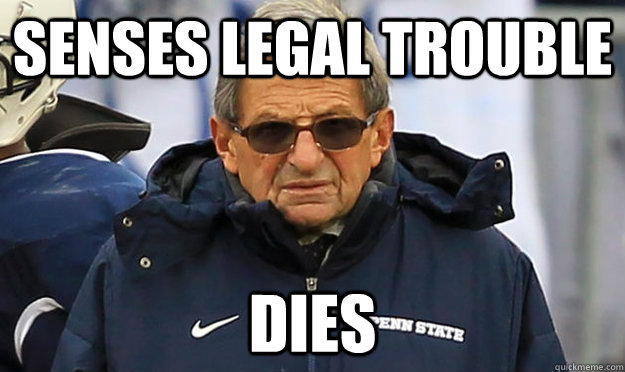 The bottom line is that the morons at Penn State, who remind us that “WE ARE” (child molesting enablers), have blamed everyone involved in this except for the captain of the ship. They cried when the JoePa statue came down. When he was still alive they held a candlelight vigil outside of his house to show support (because he’s the victim in all of this).

Nevermind the fact that many of these people were calling for him to resign, on account of he was 186 years old, couldn’t coach on the sidelines, never won anymore, and kept asking what day it was. When JoePa died and Bill O’Brien filled the vacancy, he was stepping into a world of shit. And he knew it. I hated the fact that they were allowed to play every week on TV. I’d rather watch Power Rangers reruns any day of the week. I wanted to see their idiot fans have the one thing in life that matters to them taken away – football.

The fans are the larger part of the problem. They were addicted to football, and can’t live without it. The sex abuse scandal wasn’t shocking to them, it was inconvenient. But Jerry’s in prison, JoePa’s a dead martyr, and no one on the current team molested anyone, so why should they be punished? The answer is that they shouldn’t and they weren’t. The NCAA lifted their own rules and allowed any player to transfer to another school without taking the mandatory year off. Some did, but others stuck around. And the fans rallied around the team, creating the image that they were some sort of oppressed people that can right the wrongs of society by doing what they do best – going to more football games.

So when O’Brien came in last year and went 8-4 the fans rallied around him. He was the new chosen one that would build up the program from the ashes, and hopefully keep a better eye out on the showers. He did things his way though, and fired legendary linebackers coach Ron Vanderlinden, one of the few leftovers of the Paterno era.

Well apparently this offended the pro-Paterno crowd. Yes, as strange as that may seem there are legions of nudniks who still spend countless hours every week looking for ways to defend the honor of a man who let his buddy molest what was most likely dozens of children. But hey, he won a shitload of football games. Don’t you get it? Sure, a few children had their innocence taken from them. But if they take football away from Penn State, what’s everyone gonna do on Saturdays? Didn’t think of that one now did you NCAA!!

I wasn’t sure what I thought of O’Brien coaching at Penn State for the last two years. I wished him the best because his job wasn’t enviable, but at the same time I just want Penn State to lose. When they started winning though I worried that he was starting to drink the Happy Valley kool-aid. It was only a matter of time until he was wearing Nittany Lion footy pajamas, and invoking the “us against them” credo.

Turns out I had nothing to worry about. The whole time O’Brien was thinking the same exact thing I was – these people are a bunch of dingleberries. Since he’s accepted the job as head coach of the Houston Texans, he is now free to tell Penn State fans what he really thinks of them. Here’s an excerpt of an interview he gave David Jones at Penn Live:

“For any ‘Paterno person’ to have any objection to what I’m doing, it makes me wanna put my fist through this windshield right now.”

God bless you Bill O’Brien. You are truly a king among men. I respect someone who holds absolutely nothing back and doesn’t give a shit if you remind him he’s speaking on the record. If any of you idiots get anywhere near him he’s going to shove your face through a windshield and we’ll all love every minute of it.

Penn State fans are very upset that he’s backing out on his contract. So if he went 0-24 during his tenure at Penn State I’m assuming these loyal people would ride him out for the remainder of his contract. After all, loyalty to Penn State is the only thing that matters in life. If you don’t have Penn State Nittany Lion blue coursing through your blood then you are obviously a crackhead, or even worse – an Ohio State fan.

If the Soviets had aimed those nuclear missiles at Happy Valley PA during the Cuban Missile Crisis, then Kennedy probably would’ve just told the Russian to go ahead. You wouldn’t even believe or fully understand the insanity that is the Penn State fan base unless you saw it yourself. Talking to a Penn State fan is the ultimate exercise in futility. They’re living on a make believe planet where they are the ones being violated by the NCAA, internet trolls, the Catholic church, the NAACP, GLAAD, the ACLU, and generally anyone whose happiness doesn’t depend on meaningless Saturday football games. I could explain to you all of the ridiculous things they say all the time on social media networks and point out how idiotic all of them are, but quite frankly everything they say speaks for itself. Here’s some screen shots from Facebook and Twitter. Feel free to go on their Facebook page or #weare to do some trolling of your own. It’s fun. 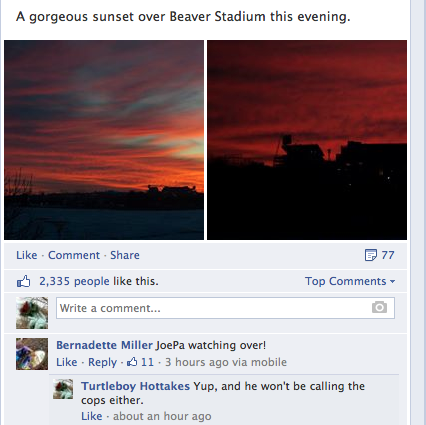