Yesterday we published a blog calling out a blatant, race baiting viral Facebook lie about a bunch of black kids being racially profiled by the Hull Police at Nantasket Beach. Upon further review the kids actually stole liquor from a store across the street, got confronted by the cops about it, and their parents agreed to reimburse the store rather than arrest the teens. 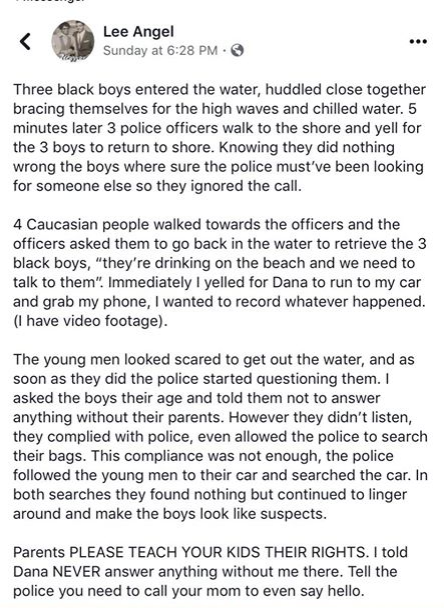 The post is still up and now has over 5,000 shares, led to violent threats, the Hull Police were flooded with angry phone calls, and it was all based on a lie. Dina Willis has been pulling stunts like this for quite some time. The race card is her go to whenever anything slightly inconvenient occurs in her life. Like how she went to the Meth Mile hospital and couldn’t believe that the racist ass nurses and doctors treat the plethora of junkies and gunshot victims before her crotch fruit. She saw that she had been called out as a fraud, and some people on her friends list even began to go after they read the blog. So she responded with this. “The white KKK of Boston” is my new favorite ratchet line. Good thing she pointed out that we’re the white KKK. Wouldn’t want to get us confused with the Mexican or Korean chapters of the Klan.

And yea, why “wasn’t they” arrested? Oh right, because the racist ass store owner, and the racist ass cops overcame their own racism and used something called discretion. They did these boys a huge favor, and because of that Hussy Smollett is still angry. Keep in mind, she’d be angry if they’d arrested him as well. It’s almost as if she’s the problem here.

Hussy Smollett has been posting screenshots of messages she’s received nonstop for the last 24 hours. I just wanna make it clear that we do not condone turtle riders messaging people who appeared in blogs. We just write the blogs. We don’t try to stop anyone from doing anything afterwards because we believe in treating adults like adults, but if you do choose to message someone then that’s something you’re choosing to do on your own. I personally would prefer if people didn’t do it because then these idiots just screenshot your messages and use it to act like they’re the victims now.

One person in particular who made a comment that was disturbing was a realtor named Regina Hunter, who said that we should teach kids that the police are not their friends.

The implication there is that if the cops aren’t your friends then they must be your enemies. Police go out of their way with community outreach programs to show the community that they are there to protect them. Sure, they’re not BFFs, but they’re someone you can go to for advice or help. When people like Regina brainwash children with anti-police propaganda it puts both kids and the police in danger.

Well, evidently she’s planning on suing for slander because of that. Pro tip – if you look into suing a website for slander, you’re gonna have a bad time. Because slander is oral defamation and the word you’re looking for is libel. Unfortunately for you when a website screenshots a comment you made on Facebook, posts it on a blog, and offers opinions on that comment, it’s not libelous.

In fairness, this woman has a very interesting and recent history with the police that would make her suspicious of their intentions. Her son, Kevin Williams, was arrested for allegedly murdering a well liked clerk in Dorchester in October of 2018. She insisted he was innocent.

“My son is stating that they stopped him for walking while black because he didn’t do anything,” Hunter told WBZ-TV.

Luckily she’s resourceful, received help from the NAACP, knew that accusing the police of racial profiling would pressure on them, and her son had the charges dropped against him. But the BPD had a witness and video surveillance to have made the arrest.

Boston police say they have the strength of a strong witness identification and video surveillance from the scene. But Hunter says she has the strength of a mother’s conviction that her son was in their Dorchester apartment helping her pack for a move the next day.

I’m not saying he actually killed the clerk, because if there was strong enough evidence to convict him they’d have brought it to trial. But he was released a week or so after Rachael Rollins was elected District Attorney. Everyone knows her deal by now. She’s a race baiting panderer who basically lets criminals run wild in Suffolk County because she thinks jail is racist. I have no idea if Regina knows Rollins, but the timing was interesting to say the least.

In April there was an arrest for the shooting, but the guy arrested is accused of being the look out, so they still don’t have the shooter. Again, I’m not saying it was Kevin Williams did it, but his uncle was the President of the NAACP, his mother is obviously resourceful and good at playing the race card, and according to her son,

“My mom’s an animal,” said Kevin. “She puts her heart into everything.”

And the killer’s never been found as far as I can tell. So take from that what you will.

She made an appearance on WBUR after an arrest was made in April, which again, was not for the shooter.

Look, I get why a mother would be distrustful of the police after an incident like this. But the fact of the matter is that her son wasn’t racially profiled, and neither were the kids on the beach in Hull. They were identified by witnesses as having broken the law. It’s the police’s job to investigate that. They had a witness and a surveillance tape suggesting it was Kevin Williams, which was the same evidence the kids at Nantasket Beach had against them. Getting someone on a murder and armed robbery charge is a lot harder than catching someone stealing a bottle of booze though.

The bottom line is you shouldn’t believe everything you see on Facebook and it’s always better to cooperate with the police like the kids at Nantasket Beach did, rather than be confrontational with them.