A story that isn’t getting nearly as much attention as it should is the whole situation going on with MMA fighter Jon “War Machine” Koppenhaver, his ex-girlfriend and pron star Christy Mack, and now Dog the Bounty Hunter.

Basically it all started a few days ago when news broke that War Machine beat the ever loving shit out of Christy Mack in her home after he supposedly found her with another dude. When a warrant was put out for his arrest he hit the open road and started tweeting his side of the story. Apparently he blamed it all on the other guy who was there:

I only wish that man hadn't been there and that Christy & I would behappily engaged.I don't know y I'm so cursed.One day truth will come out

I can't believe this…I must be cursed.

@ChristyMack I love you and hope you're okay. I came him early to surprise you and help you set up for your convention. I can't believe

@ChristyMack what I found and can't believe what happened. All I wanted was to surprise you and help and do something nice…now this..

@ChristyMack I'm so heart broken…in all ways. I will always love you.

@ChristyMack I just wanted to see your face when I surprised you with the ring …this is a nightmare. You're in my thoughts.

I'm not a bad guy, I went to surprise my gf, help her set up her show and to give her an engagement ring and ended up fighting for my life.

The cops will never give me fair play, never believe me. Still deciding what to do but at the end of the day it's all just heart breaking.

Well it turns out that War Machine wasn’t being completely honest with his tweets. It also turns out that he’s a complete puss-bag psycho piece of human garbage. We know this because she posted pictures of herself and explained what really happened on Facebook:

“At about 2 a.m. Friday morning, Jon Koppenhaver arrived announced to my home in Las Vegas, NV. After he broke up with me in May, he moved out of my house and back to San Diego. When he arrived, he found myself and one other fully clothed and unarmed in the house. Without a single word spoken, he began beating my friend; once he was finished, he sent my friend away and turned his attention to me. He made me undress and shower in front of him then dragged me out and beat my face. I have no recollection of how many times i was hit. I just know the injuries that resulted from my beating. My injuries include 18 broken bones around my eyes, my nose is broken in 2 places. I am missing teeth and several more are broken. I am unable to chew, or see out of my left eye. My speech is slurred from my swelling and lack of teeth. I have a fractured rib and severely ruptured liver from a kick to my side. My leg is so badly injured, I have not been able to walk on my own. I also attained several lesions from a knife he got from my kitchen. He pushed the knife into me in some areas including my hand, ear and head. He also sawed much of my hair off with his dull knife.

After some time, the knife broke off of the handle and continued to threaten me with the blade. I believed I was going to die. He has beaten me many times before, but never this badly. He took my phone and cancelled all of my plans for the following week to make sure no one would worry about my whereabouts. He told me he was going to rape me, but was disappointed in himself when he couldn’t get hard. After another hit or two, he left me on the floor bleeding and shaking, holding my side from the pain of my rib. He left the room and went to the kitchen where I could hear him ruffling through my drawers. Assuming he was finding a sharper, more stable knife to end my life, I ran out the back door, shutting it behind me so the dogs did not run inside to tip him off. I hopped the fence to the gold course behind my house and ran into a neighboring house. naked and afraid he would catch me, I kept running through the neighborhood running through the doors. Finally, one answered and I was brought to the hospital and treated for my injuries.

I would like to thank everyone for their support through this rough time. I am healing fast and well, and I appreciate a lot of the prayers and visits I have received over the past few days. After many months of fear and pressure to keep this man happy, although I fear for my life, I feel that I can no longer put myself in this situation. The cheating by him nearly everyday, and almost weekly abuse, is now more than I can stand. There is a $10k reward for the capture of Jonathan Koppenhaver at this time. Please report any information to your local police. 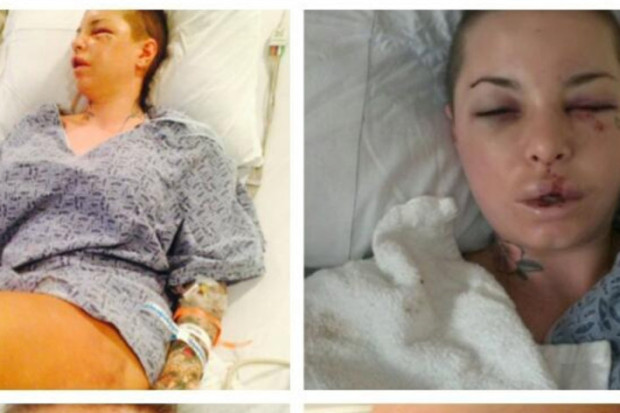 I’m sorry, but I just don’t get the whole violence against women thing. I really don’t know how anyone has it in them to beat the shit out of someone who you know can’t fight back. Does that feel good? Do you feel like you’ve accomplished something after that? Every man has been enraged with a woman before. There’s a simple solution to that. It’s called “the chop.” You just bring your arm up high and then chop it like you’re a Florida State fan, thus creating the illusion of an imaginary wall that protects you against all annoying things she’s saying. But no normal man looks at a 110 pound woman and says, “I’m gonna beat the shit out of her.”

Kind of puts some new perspective on his side of the story doesn’t it?

It turns out that War Machine isn’t the Boy Scout we all thought he was. Shocking. And his Twitter is like a non-stop look into the mind of a psychopath who was born to kill mother fuckers. Whether he’s talking about threatening the UPS guy:

I called the driver a PUSSY cuz the normal driver carts them up the stairs. He says I'm "threatening him" and threatens to call cops! @UPS

Biggest pussy @UPS driver ever invented! When my normal guy gets back I'm gonna tell him to slap the fuck out of that guy!

Narrowing down his list of people he would kill a mother fucker in the name of:

Fucking nasty fucking mood. Too many motherfuckers that I would have killed for have proved unworthy.

Getting into beefs at the local IHOP:

Great, pissed off and go to get food and blow steam and of course this motherfucker I HATE is here…..wtf?!

Talking about his desire to choke a bitch:

His surplus of boners problem:

“@baltim0re28: @WarMachine170 what's got you so pissed man??” Too many boners and nothing to do with them…lol

I've had a god damn boner since like 2 AM! I'm trying to drop my @AlphaMaleShit orders at the post but stuck in my car with wood! Fuck..lol

Giving sexual tips to 16 year olds on how to treat a woman:

Sharing his tales of domination in his Prius:

Always amuses me when truckers try & bully my lil Prius when merging, they got me fucked up cuz I DON'T CARE if they bump me. Chicken Champ!

Peddling his “I do Alpha Male Shit” line of T-shirts:

He just can’t stop help himself it seems.

Unfortunately for him he doesn’t seem thrilled about the prospect of prison:

And that’s exactly where this animal belongs. Now what I’m about to say may offend some of you, but you can’t please everyone all of the time. MMA sucks. It’s two psychopaths like this rolling around in their underwear with no rules. It’s homo-erotic anarchy in a cage. Boxing is a great sport because there are rules and order.

And the only thing worse than an MMA fight, is the crowd that comes to the bar you’re at when they put the MMA fight on. They always act like it’s some huge fucking event. Barbosa is gonna fight Pissosa until one of them ends up with their head in the other one’s crotch. Then we’re all gonna drown ourselves in testosterone and high fives. And this crowd is always full of grown ass men that still wear their XL Brian Urlacher jerseys out to the bar. Sorry if you fit this profile. I won’t bring it up again, but 99% of the people who watch this shit fit this profile: 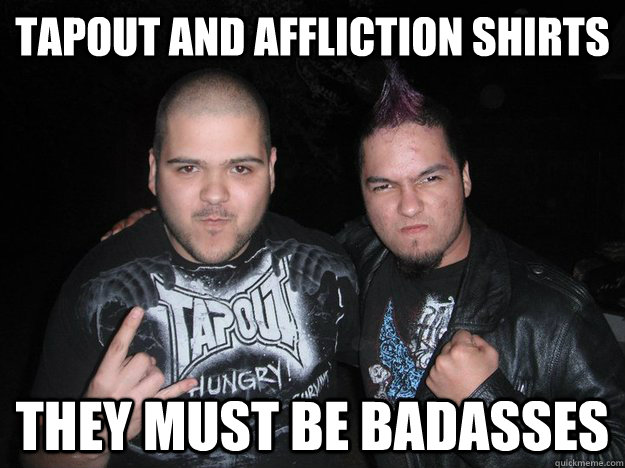 Well usually in America when someone is on the run the FBI and the police take care of it. That’s the way I like it. I don’t wanna live in a country where you’ve gotta hire someone to enforce the law, or where every yahoo with a gun and a pint of whiskey gets deputized. This isn’t fucking Mexico. What I can’t stand are vigilante wannabe Pinkerton detectives like Dog the Bounty Hunter. I’ve seen this guy’s show before and I ALWAYS root for the bad guy. Like, who the fuck are you Dog? And who deputized your God damn posse? Like, what fucking authority does this guy have to go around tasering people?

This is why I’ve reached a moral conundrum with this story, because Dog the Bounty Hunter is hot on the trail for War Machine. As usual, I’m rooting for the cops. Either that or they both go down in a hail of gunfire. Because let’s be honest – War Machine ain’t going to prison. He’s not exactly a model of mental stability. This asshole’s going down with the ship. It’s kind of ironic that this was happening, because four years ago War Machine tweeted how he wished a mother fucker WOULD send Dog the Bounty Hunter after him:

If Dog the Bounty Hunter came to get me I'd beat his ass!

Obviously War Machine would destroy Dog the Bounty Hunter in a fight. That’s why DBH released this statement:

We won’t kill him, but at the same time, you won’t see Dog Chapman versus the “War Machine” because I’m not stupid — he’d probably break my nose. But, you may see him eat Dog Chapman’s taser.

Fuck you Dog. Why the fuck are you my knight in shining armor? I want War Machine to go down as much as the next guy. I just don’t want you to have the satisfaction of being the guy who gets him. In my perfect world Dog gets to him five minutes before the cops. He gets knocked around a few times by War Machine. Then his posses tasers the shit out of them before they all go down in gunfire by overzealous local police. That would be sweet.

Either way, I’m like really excited to see how this all turns out.