King Creeper McRapeface Claims To Be Unaffected By Blog Calling Out His Relentless Online Sexual Harassment, His Endless Facebook Rants Determined That To Be A Lie Anyone remember Natick Sands? He’s the ladies’ man who felt it was totally appropriate to mass spam random chick’s inboxes with shit like THIS last week. 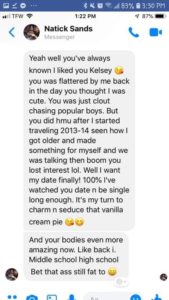 That’s gonna be a Casa-NO!-Va from me, dawg. You’re creepy as hell. And God, that name. Why do you parents hate you so much, Quincy?! Anyway, after we wrote this blog detailing his pattern of sending pathetically desperate, explicit and totally unsolicited messages to completely uninterested women (read: every woman in a 10 mile radius with an internet connection), things really got interesting, because China Town lost his ever-loving shit.

Well, that’s normal. To respond to your assertion, Randolph, no – I don’t “wish” I could hop up in my crushes DM and ask to fuck str8 up”. Because I am a woman, who is married, and therefore get laid more than once every leap year. We are not the same. Despite his insistence that it is not possible to shame him or his unnamed shorty whom is apparently still rocking with him despite having the online behaviors of a sexual predator or member of the New Delhi “bobs and vagene” mafia, Natick sure went downhill fast. Literally up until two hours ago, Rockland was still posting obsessively about this. Can someone let Salem know we never called him a pedophile? He seems confused and keeps making up defensive word salad. Drugs are bad, kids. He seems pretty bothered. There’s an easy solution to all this, you know. Stop sexually harassing women online. Simple! But anyway, looks like Melrose expanded his radius to the West Coast, and maybe even had some luck? Good for you, buddy. You only had to look over 3,000 miles away to find someone actually interested in your creepy peen. Looks like your totally inappropriate persistence maybe paid off – unless she’s really a 60 year old dude. That would be hilariously ironic!