Lawrence High School Students Film Themselves Fornicating Outside Of Classroom For 15 Minutes, Distribute The Video To Other Students, Cops Now Investigating So apparently there is video that is making the rounds on social media which has also been sent to many students, depicting two students at Lawrence High School engaging in gland to gland combat in a hallway outside of an empty classroom. We have no idea how old these students are, and when we were sent it by an anonymous source the first thing I did was call Uncle Turtleboy, and then he called the Lawrence Police. Evidently they are well aware of it and are working to identify the two students in the film. UT informed them that we would be publishing something about this, which they did not object to. I just want to make it abundantly clear that we never downloaded this tape, it was sent to us anonymously, hundreds of people in Lawrence have already been sent it, and we covered our bases legally before doing so.

Obviously we will not be showing you the video itself because we don’t need to send Uncle Turtleboy to jail. But we can show you still shots from the video in which the subjects are fully clothed, and with their faces not showing. This video has been shared on social media plenty of times, and two kids doing this during school hours, filming it, and then posting it on the Internet, is news. It’s news because it’s two videos totaling 15 minutes, and somehow not a single teacher or administrator in this school patrolled this part of the school for that length of time. It also means the two students KNEW that no one would be coming that way, which is why she felt so comfortable filming it. The girl in the video is the one who filmed it with her iMachine, and sets it up facing classroom H305. The video is out there, hundreds of people have seen it since it was distributed, and obviously the initial person to send it out there was the girl who taped it.

It starts off with a student who looks like he’s on his 5th try at sophomore year, lying outside of room H305. 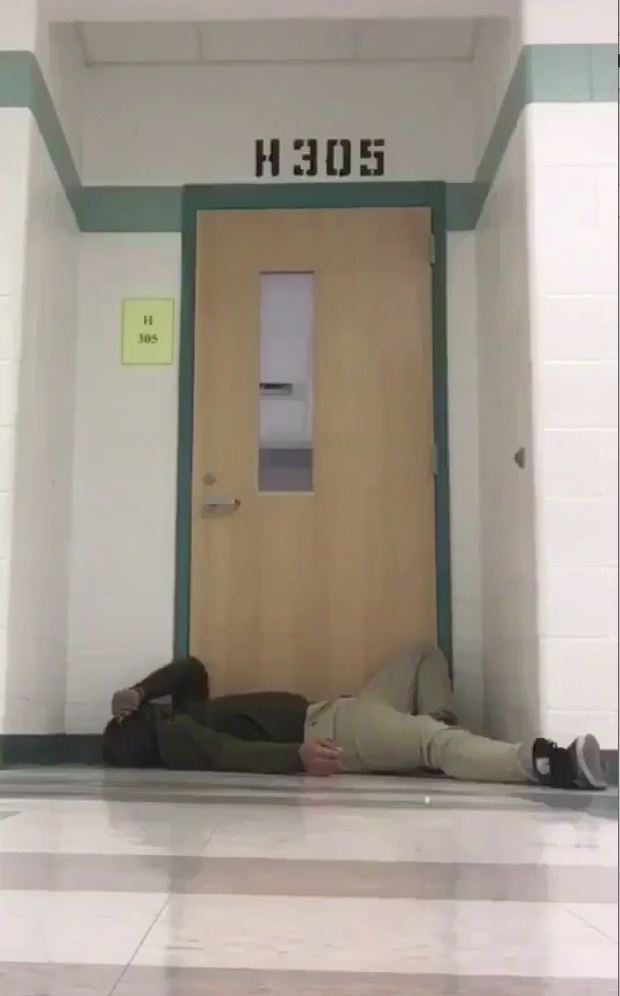 The female star of the movie set up her phone and walks over to swap some saliva. 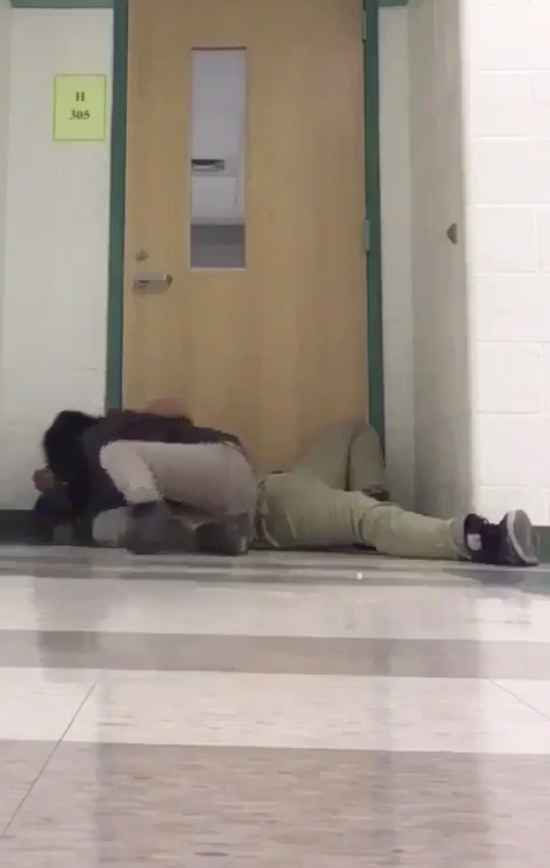 Luckily she qualifies for free lunch. Then it’s time for some good ol’ fashioned dry humping. Then we have to fast forward as both of them derobe, and the fornicating begins. It’s entirely one position, and lasts about 10 minutes. And since it’s Lawrence they obviously choose not to use protection because mo babies mo food stamps.

After it’s done she gets up and leaves him exactly how she found him. Then she looks down and imagines all the child support he will never be paying to her as he attempts to freshen up. She gives him a helping hand, since he just tossed her the D. And finally she walks over to the camera, picks up the phone, and the video ends. 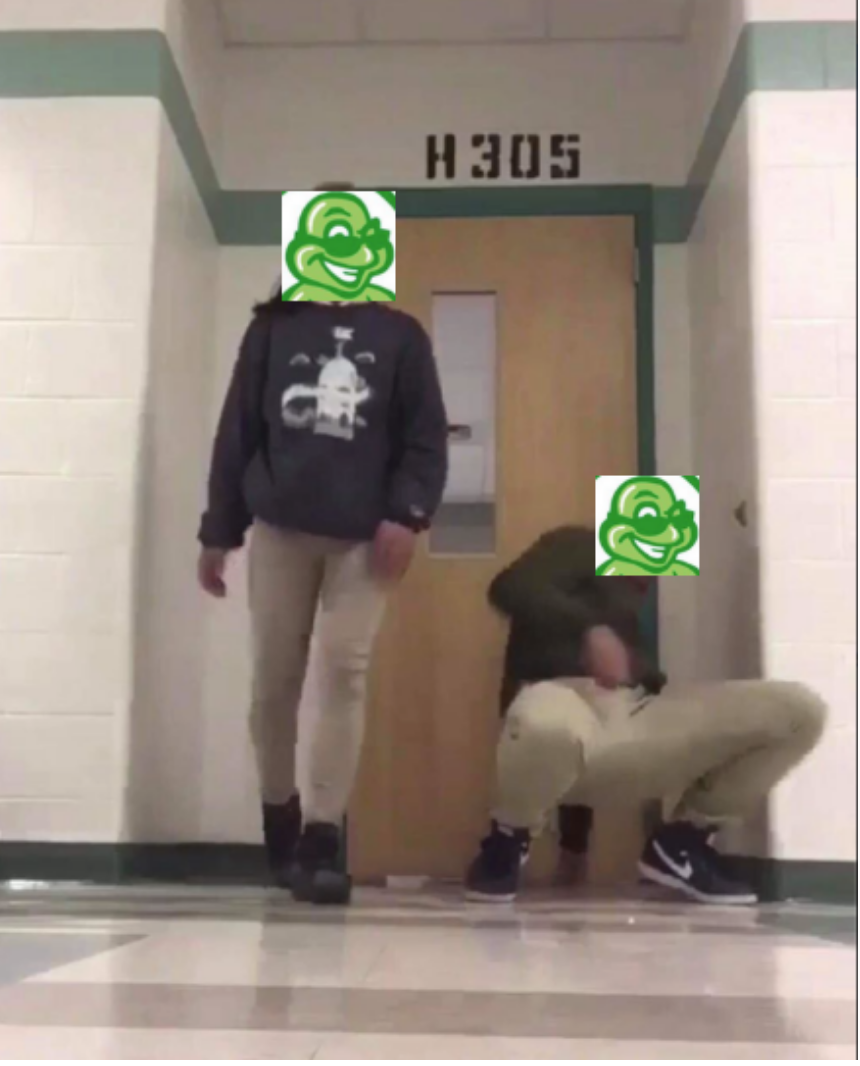 Administration better hope raw dog is a category on the MCAS this year, or else these two junior queefs are in trouble.

Question – what’s the point of school uniforms if you still get to wear Jordan’s? Isn’t the whole point to make kids not worry so much about buying expensive clothing to impress their peers? Seems to defeat the purpose if you get to wear whatever sneaks you want. Just sayin.

I don’t know how this is possible, but it’s unacceptable. I understand kids are gonna break the rules and fuck like rabbits, but the school should have a better plan in place to avoid this from happening. These are not the first two kids to bang during school hours, but they’re the first I’ve seen record it and distribute it on social media.

If this took place during school hours then it probably means that this particular part of the school was at lunch during that time, and the students knew no one would be up there. In this case it’s a risk in case a teacher came back early. The school should have hall monitors and cameras to make sure two kids don’t just go missing together for 15 minutes at a time.

If this took place after school hours then it’s unacceptable for two students to be wandering the hallways by themselves. This is an obvious safety issue, and Lawrence High School should have a better policy in place to prevent this from EVER happening.

According to the school’s newsletter they have parent MCAS meetings in that room.

Meanwhile, up in H-305, a group of HLD parents assembled for a workshop on how to understand their child’s MCAS scores. Who would expect to see nearly 50 parents and guardians gathered in a classroom on a Friday evening for a parent workshop?

If you know who the kids are in the video please contact the Lawrence Police.

P.S. How much of a waste of taxpayer money is sex education? We’ve been doing this in schools for how many years and kids STILL don’t even consider using a rubber.