Craig Miklavic is a current UMass student and special guest blogger at TurtleBoy Sports. Any and all UMass students who would like to share their unique experiences about UMass basketball, whether that be personal interactions with players, drunken experiences at the Blarney Blowout, drunken experiences watching their first round game in the tournament, or any other hot takes you want to chime in with, is always welcome. Email me @ hottakes@yahoo.com, or message me on the Facebook or Twitter links listed above. This is your school, and we’d love to hear more students perspectives.

Well, that sucked. I think it is safe to say that no UMass fan expected any of that to happen. This tournament went terribly for the Minutemen. Let’s start with the URI  game. Yes, we won. But, it was even scarier than the first two meetings, which were hard to top. It was beyond frustrating to watch. Me and about 8 other friends of mine were all cooped up in my room in one of the towers of Southwest at UMass, all huddled together throwing down a case of beer. Needless to say, the more the  game went on, the more yelling occurred; and we had plenty to yell about. UMass managed to throw up a frigid 31.5% from the field including just 2-15 from behind  the arc. Also, the flopping from URI was ridiculous. I felt like I was watching LeBron  or Marcus Smart out there. It wasn’t until Chaz hit his off the dribble, step back three to go up four late in the second half when our yelling transitioned from woeful  to cheerful. I think Chaz’ mom or Andy Sorkin (the UMass Ref) were the only ones who was more ecstatic than we were. At the end of it though, as my grandfather once  told me, a win is a win is a win is a win.

Now, George Washington was a bit of a different story. Being home on spring break  now, and being the poor college kid I am, I was stuck watching the game at home  with my girlfriend and my father who is arguably the biggest UMass basketball fan that I have met (aside from myself and TurtleBoy of course). Unfortunately, this  meant that my sorrow at the end of the game wasn’t followed by a big dorm party or a game of pong or flip cup. It meant it was time for bed. It felt like we just could  not do anything. We finally pushed the deficit down to four at the end of the first half then in a span of 6 seconds, GW was seemingly magically was up 9 again heading into halftime.

The second half was just full of disappointment though. I was  hoping that Kellogg would light something under their asses so they would come out on fire and cut the lead down or go on some kind of 15-3 run or something like they did so often throughout the season but none of that happened. Finally, at the end they pushed it to 8 points with enough time on the clock and the ball and my mind  was rushing back to the game at George Mason earlier this season. But, then somehow with his feet still moving, one of the GW forwards took a charge on our “5’9”” point guard which gave GW the ball right back and inevitably, the victory and  a date with VCU in the semi-finals – leaving UMass nothing to do but watch the team they defeated earlier this year improve their resume for the NCAA tournament.

Maxie was easily the best player for UMass in the tournament. He totaled 15 points against URI and then a game-high 22 against George Washington. It wasn’t only the scoring though. It felt as though he was everywhere on the  floor. He grabbed 7 boards in each of the two games and 5 total steals. I love watching him play. He is unbelievably athletic and still in my mind is the 6th man of the year in the A-10. It is funny seeing him out there to me though. I live just two doors down from him on campus so talking to him in the halls then seeing him throwing down highlight dunks makes me laugh. Luckily,  Esho is just a junior and we get him for one more year. 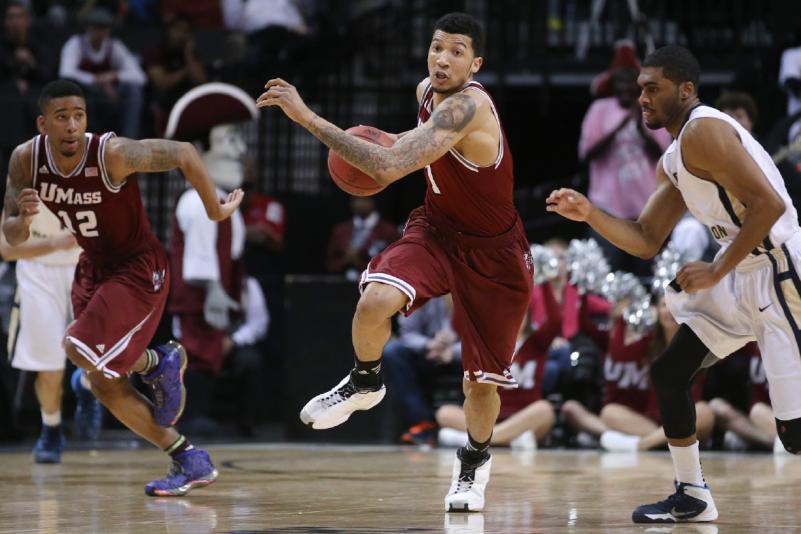 I liked that Kellogg put in Dyson, Berger, and Santee against GW. It gives them some tournament experience. Also, it didn’t look like Putney, Carter, or Lalanne wanted to be out there anyways. These kids had nothing to lose.  Nobody aside from diehards even knew who they were so all they could do was make a name for themselves. That being said, they played great! Dyson  was 2-2 from behind the arc in some serious minutes, Santee was 1-1 from behind the arc and a big dunk late in the game. The only shot that did not fall was the three that Berger put up that got swatted. Kellogg was trying hard to  find something that would work since our usual players clearly were not working at all and this crew gave us fans a little hope in the last few minutes.

I love this woman. She is a glittery jersey away from filling in the hole that Ray Allen’s mom left in the hearts of Massachusetts basketball fans. My favorite two moments from this wonderful lady from over the weekend were after Chaz hit the big three against URI when I thought she was going to jump the barrier and run out to hug him. Also against GW when he hit a big three, she cooled off the pistols and threw them her own holster twice. I take back what I said about my dad earlier though, SHE is the biggest UMass fan (at least Chaz Williams fan) I’ve ever seen.

Anyways, it is on to the big dance for the Minutemen and after that less than impressive performance, I would put us around an 8 seed – 7 if we’re lucky, but I do not see anything higher than that unless the committee is feeling generous. We all want to be praying for that 7 seed though. The 8 seed has to get by a 9 and then  beat the 1 seed if they want to see the sweet sixteen. As a 7 seed, we would get the 10 and then most likely a 2 seed instead of an almost guaranteed meeting with a 1 in the second round. No matter where we are though, we have to play better than  that if we want to make some noise and prove to the country we are still the same team that started the season 16-1.