Editor’s Note: The MIAA did some really fucked up shit today that Turtleboy is covering in an upcoming blog. JoeyGenius meanwhile has an intriguing idea about how to stick it to these professional assholes and crooks. Here it is.

So we have reached that time of year again: June.  We have all heard enough bullshit from commencement speakers about “being true to ourselves” (whatever that means) and following our dreams.  However, with the Bruins out of the playoffs, the NBA reminding us of the WNBA, and Major League Baseball being… what it is in June, we need something to do before we commemorate our victory over the British by eating thousands of hot dogs while celebrating our nation’s independence by blowing up a small part of it with some illegal fireworks.

So we turn to local high school baseball, softball, and, for the pansyasses Long Island wannabes, lacrosse to fill our time. So we get ready for a day at the ballpark and find that those bastards at the MIAA are charging between $7 and $10 to watch our sons, daughters, and students play a high school game.

Am I the only one who thinks this is absolutely asinine? Clearly I brought a whole bunch of markers of different colors with me to give myself a phony stamp on my hand that easily fooled the 17 year old girl guarding the re-entry point, so this doesn’t directly impact my wallet. However, there are thousands of parents out there who do not have access to the 15 different shades of markers that I do who are forced to pay these ridiculous prices in order to watch their daughter play softball.

For those of you who don’t know, the Massachusetts Interscholastic (Asshole)  Athletic Association has served as the fun police for Massachusetts high school athletes since Satan sent these people up from hell its inception many many years ago. Those of us who played under their iron fists had to keep our drinking and pot smoking a secret from them in order to retain our eligibility. Oh, and don’t even think about talking during a foul shot or wearing a tiny earring while participating in the high jump. These dickheads will quickly have you removed from the game or disqualified from your event. You want to celebrate a touchdown by spiking the ball, chest bumping a teammate, or urinating on the face of the cornerback you just toasted? Sorry pal, you better get your ass to West Texas, because it’s not happening here.

Before we get to the money that these cheats and liars steal, let’s talk about their attack on fun. I will assume that they don’t like high school kids drinking because they were never invited to any parties in high school. I fail to see how a 17 year old golfer from Dedham High School smoking a cigar during a game with dad on Saturday afternoon or a Lunenburg High School Quarterback drinking a 12 pack of Natty Light before deflowering the prom queen after a big win over Narragansett tarnishes high school sports.

Don’t even get me started on the lack of fun that high school basketball games have become. The best part of being a fan in high school was yelling the most vile and obscene things possible at Mike Bradley back in ’97 while he was on the foul line. Not anymore, in the name of sportsmanship (and I assume some other asinine anti-bullying crusade), the crowd must remain dead silent during all free throws and we must never ever boo a rival school.

The celebration rules are the worst policies put into effect since the Jim Crow south. On that note, many of the kids scoring touchdowns in Central Mass have a darker complexion that many of the members of the MIAA governing board, and their celebrations seemed to be rather loud, expressive, and in-your-face back in my day. Like the NFL owners who created these asinine penalties because Randy Moss and Terrell Owens were scary, the MIAA followed suit and made their own rules to ensure that no young people have any fun whatsoever while playing sports.

Here at Turtleboy Sports, our investigative team has come across the 2013 audit for the (Fun Gestapo) MIAA. Take a look here.

I really hope that this money (in addition to the post-retirement benefit plans they are funding) is going to janitors or people performing clerical work for these vultures, because it would be absolutely sickening to consider the fact that school principals, athletic directors, and superintendents who are already drawing six-figure salaries are also drawing a salary off of the MIAA drawing exorbitant entry fees into their games.

We already pay taxes to support our town schools, and some of us have to pay high fees in order for our kids to play sports.  It is absolutely absurd to think about the fact that the MIAA is making millions of dollars off of HIGH SCHOOL games that could easily be played on any one of the hundreds of baseball fields, football fields, or basketball courts statewide. How do I know this? Because I watched a quarterfinal game on Monday at a local high school, paid nothing, and everybody lived. Somehow these people have led us to believe that high school sports cannot go on without them.

I am writing this blog as an open letter to all decent human beings out there.  To the high school principals, get together and make your own tournament without these bastards involved.  To the fans, when you walk up to get a ticket at any MIAA event in the next two weeks, make a phony stamp, sneak in, or come up with an excuse as to why you went to your car.  Just don’t give these self-important pieces of excrement another dime.  Somehow kids have managed to play sports for hundreds of years without some pieces of human garbage acting as a governing body in order to steal hundreds of thousands of dollars.  Making a dent in their profits starts with us and it starts right now.

P.S. Here is the board for the MIAA: 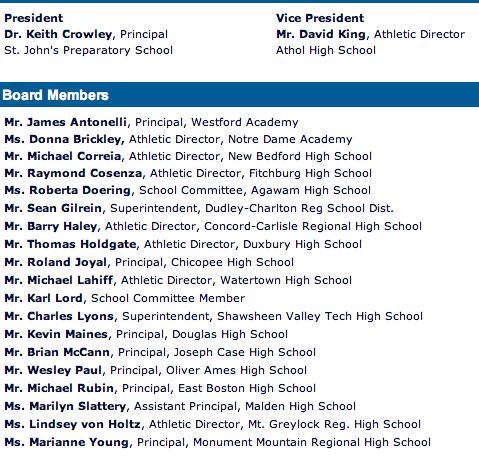 And here’s a link to Executive Director Bill Gaine’s $138,000 salary

Feel free to share your thoughts in the comments.