Back in April we published this blog about a micropenised maggot lucky sperm named Eugene “Michael” McQuade. His father Gene is the former CEO of Citibank: And he obviously did a horrible job raising his raw dog trophy because Eugene Jr. neglects and abuses dogs that he trains, and they had to be taken from him. Then some hack judge gave him the dogs back as part of a plea deal and when he went to pick them up he acted like bag of flaccid penises that he is:

With an expletive and an obscene gesture, Eugene McQuade drove off the property of the Exeter Animal Shelter on Saturday with three of his dogs that were originally taken from him in January when they were found living in squalid conditions on properties in West Greenwich and Coventry. This week, 24 of 25 charges were dropped as part of a plea deal, and a judge ruled he was allowed to get three of his dogs back.

“For them to be returned to a place where they weren’t getting care is not OK,” said one volunteer at the shelter who helped care for the dogs during the past four months.

NBC 10 News cameras captured McQuade shouting at volunteers at the shelter and threatening them with legal action when he was asked to sign an invoice for the animals’ care before taking the dogs.

“(He was) swearing at us, dropping F-bombs. It should not have happened like this,” said another volunteer.

The staff said the dogs’ health has improved since they arrived in January. Some had injuries from being tethered and they suffered from a parasitic condition called giardia, likely from drinking rain water.

This is not McQuade’s first time in trouble with the law because of animal cruelty allegations. He was charged in 2013 of mistreating animals, and in 2014, he was accused of controlling vicious dogs. A friend that came with McQuade tried to physically threaten our photographer as the dogs were being loaded into a vehicle. Volunteers felt threatened by him too.

“His friend that he brought here was a bully, and he treated us terribly,” recalled one of them.

Eight of McQuade’s other dogs are being cared for at an animal shelter in Coventry. It is not clear at this time what their future may be.

ONLY ON 10: A very angry Eugene McQuade picks up his dogs at the Exeter Animal Shelter today and has some choice words (and gestures) for our crew. You don't want to miss this story coming up on @NBC10 news at 6:00. pic.twitter.com/iiBMBFvBfX 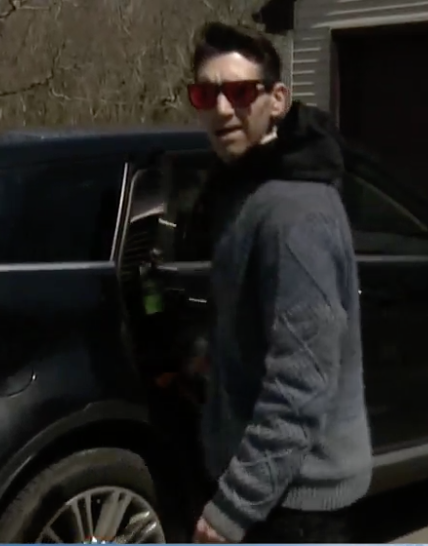 The guy who drove him home from the shelter where the dogs were doing great is named Clifford Dennis. And this crisco jizzrag has a long and documented history of abusing dogs, and leaving them out in subzero temperatures.

Authorities found 15 pit bulls with no food or water chained in the woods near an abandoned house in Warwick, RI, on December 27, 2010, according to the Providence Journal. The dogs were spread over a four-acre area and only small doghouses with a little straw inside protected them from temperatures in the 20’s and 12 inches of snow in blizzard conditions. Each dog was secured by a heavy six-foot tow chain. Animal control officials stated the dogs are owned by 47-year-old Clifford Dennis. They really are the ultimate villains. Just soulless, evil maggots, who everyone agrees the world would be better off without.

Anyway, we haven’t heard much from them until I got this message on Facebook last week: Should I fight him at the country club for the dogs? Just look at this face: That’s the most punchable face I’ve ever seen. He looks like racist Christian Bale in Shaft.

But let me repeat – your family is trash. You are human garbage. If you died tomorrow I would celebrate on your grave and laugh in the face of your family members as they cried. Because you are PURE EVIL, you abuse dogs, and your only friend is a fat tub of shit who gives you rides, and the only thing you have in common is your mutual enjoyment of animal abuse. Your mother is terrible, your father is terrible, and you will die childless, alone, and unloved. I’m not gonna kick your ass because I’m non-violent like that, but when you eventually are sentenced to prison one day (which you will be) I promise you that I will be in the courtroom to blow you a kiss goodbye.