My Fox 8 – A public school teacher was arrested Monday after police say she showed up at school for her first day of work under the influence of alcohol and without her pants. School officials say they found Lorie Ann Hill, 49, in an empty classroom disoriented and without pants. The police were called and Hill was booked into the Wagoner City Jail on a public intoxication complaint. School officials say Hill was just recently hired. 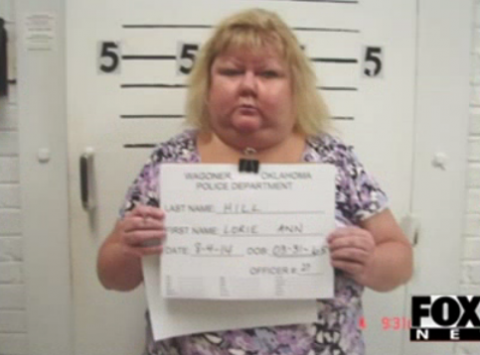 Holy smokes!! She drank so much her neck disappeared!! Apparently she was charged with drunk and neckless behavior.

This lady should’ve gone with the Costanza defense. “Was I not supposed to do that? Was that wrong? Because I gotta plead ignorance on this one. Had I had any idea that coming to school drunk and pantless was frowned upon in Oklahoma then I certainly wouldn’t have done that.”

It seems like a plausible defense because, hell, it’s Oklahoma. Isn’t Oklahoma supposed to be the land of the free? What’s with all these bullshit rules about sobriety, and pants?

And I’m sorry, but whoever hired this woman is partly to blame too. I mean, there was an interview I assume right? Did they not see what this woman looked like? When I look at this woman I instantly imagine her in front of me at the store buying a liter of rum, a pack of Newports, and a million different scratch tickets. Did anyone honestly think that Hony Boo-Boos alcoholic aunt would be a good leader of young minds? Apparently all you have to do to get a teaching job in Oklahoma is say the world was made exactly 6,000 years ago and Charles Darwin is a communist.

Here’s another thing – what kind of cruel, cruel people begin school on Thursday August 7th? I’ve never been to Oklahoma but I assume it’s fucking hot. Who wouldn’t drink? And if they’re going to school so early how come they’re all still so dumb down there? Shouldn’t they be smarter than us by now? Or are all their teachers wasted?

You know who I blame for this more than anyone though? Obama and Bush. When I was growing up teachers used to actually teach. They taught us good too man. I learned cool shit that wasn’t in the curriculum all the time. Why? Because there was no state test.

Now teachers are stuck teaching kids boring shit and talking about their feelings. Oh yea, and politicians like Obama blame schools for “failing” kids who don’t do what they’re supposed to do. School suspends a kid for throwing a chair at his teacher and the next thing you know they’re being scolded in the State of the Union for setting the kid up for failure and being racist because he’s not white.

So why the hell would anyone with any skills wanna go into a profession where you don’t get paid much, you have to get a Master’s degree, and your job is to perform miracles? The answer is you wouldn’t. So you’re stuck with this neckless, drunk woman with no pants. Murica.