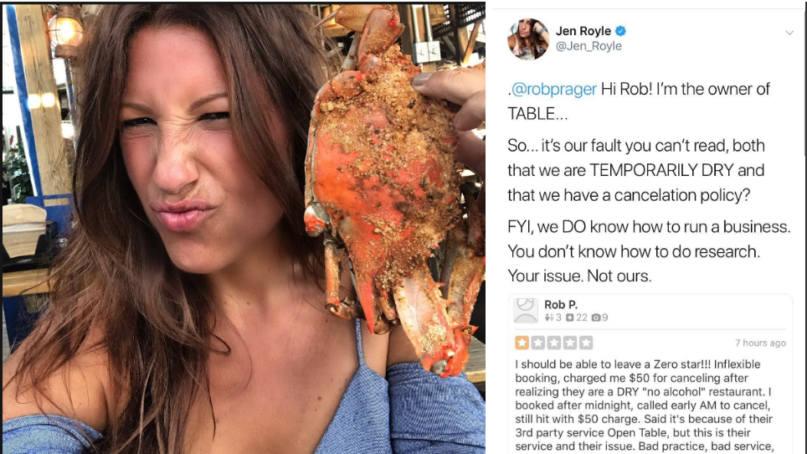 Jen Royle is a sports reporter turned restauranteur who recently (months ago) opened up a restaurant called Table in the North End. I have to admit, she’s one of the more scissorable 43 year old women I’ve seen around these parts. Table’s opening got a lot of coverage in the Boston media since she’s a blue checkmarked quasi-public figure. The food looks excellent, and it’s North End dining so obviously it’s not gonna be cheap ($85 a person). The problem is they don’t have a liquor license, but that’s clearly stated on their website.

It’s gotten a lot of good reviews, but when you’re in this industry you can’t please everyone. No matter how good your restaurant is, you’re gonna get bad reviews from time to time. Most business owners understand that and don’t take it too personally. Jen Royle is not one of these business owners. Here’s how she handled a recent 1 star review from a guy who was charged $50 for canceling his reservation after realizing that they didn’t serve booze there.

So… it’s our fault you can’t read, both that we are TEMPORARILY DRY and that we have a cancelation policy?

FYI, we DO know how to run a business. You don’t know how to do research. Your issue. Not ours. pic.twitter.com/EQP3YfaLd5

Just to review. A guy using the name Rob P posted a 1 star review after booking a table when Table was closed, then canceling it in the morning, and still getting charged a $50 fee. She had no idea who Rob P was since Yelp is anonymous, so she went through the information he used when he put his credit card down to book the table, then doxxed him and publicly shamed him for leaving a bad review.

That’s one way to conduct business.

In fairness, it does say on Table’s website that they are a dry restaurant and a $25 cancelation fee will be assessed.

But this guy got a $50 cancelation fee. Either way, doxxing a guy you took $50 from because he had the audacity to not be happy about this is an extraordinarily ratchet move. Especially since it seems to violate your own privacy policy, which is also listed on the website.

“We do not share your personal information we have collected from you….with your social networking sites….”

“Data will not be shared with third parties with or without user consent.”

Amended – unless you leave a bad Yelp review. Then we’re going to publicly shame you and our privacy policy no longer exists.

I get why these policies are a thing, and I get that this is on their website so the guy technically fucked up. But at the same time, what business did they lose as a result of this? Was there an empty table that night because of his cancelled reservation? If not, just give the guy his money back.

Rob Prager was not happy about it, and in fairness he seemed completely reasonable. A normal business owner just walks away from this one. Not Jen Royle though. She doubled down. Ummm….you have 30,000 Twitter followers and a blue checkmark. You publicly stated his name for all of your followers to see. But please, tell me more about how this isn’t publicly sharing his information.

She then went after pretty much every person in her mentions who suggested that this was probably not the best way to conduct business. Oh I know. I can’t believe how bad I am at running a business after just five months. You’re not very bright are you? pic.twitter.com/6fdRf2odBX He gave you $50 and got nothing in return. Not sure if that makes him a customer but you definitely profited off of him, and it cost you absolutely nothing. Well, that’s one way to do business I guess. I can hardly say shit because we’re in the business of calling people out who shit on us for a living. But then again, we’re a blog, not a high end restaurant in the North End. If it doesn’t hurt her business then I guess more power to her, but if she’s doing as well as she claims to be doing I’d personally look into hiring a PR person to speak publicly for the business. This is Gaffney-esque.

Then again Jen Royle is no strangers to public feuds. Two years ago she had public tweet beef curtains cat fight with former ESPN trophy reporter Brit McHenry, who is a dreadful, miserable cunt herself. Months later she challenged McHenry to a fight. I guess the lesson here is, if you’re gonna book a reservation at Table, make sure to use a fake name. Because if you leave a bad review she’s gonna publicly shame and dox you on social media. If you leave a good review she’ll tweet that out though.

Two of our favorite reviews from the weekend! Thank you to all our diners who make us feel so warm and fuzzy inside. We love feeding you! ❤️ pic.twitter.com/klWZPPMgm0