In his first public comments since DE Ray McDonald was arrested on suspicion of domestic violence after an alleged incident involving his pregnant fiancée, 49ers coach Jim Harbaugh did not mince words.

“I’ll be very clear,” Harbaugh said on the KNBR Morning Show. “You ask me how I feel about domestic violence. I can be very clear about that. If someone physically abuses a woman and/or physically or mentally abuses or hurts a child, then there’s no understanding. There’s no tolerance for that.”

When asked if he would not allow a player guilty of domestic violence on his team, Harbaugh answered, “Yes, we would not. We can be very clear.” 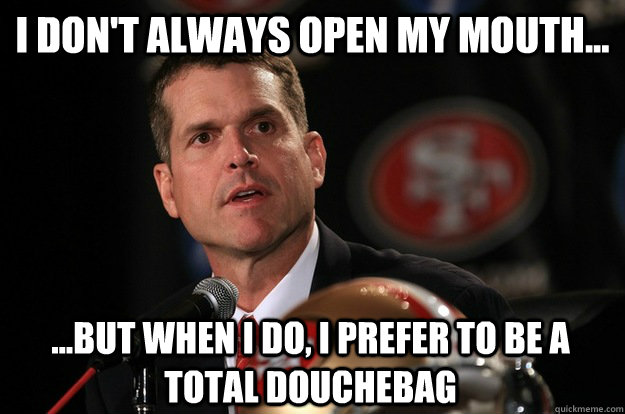 Question – is Jim Harbaugh completely full of shit or just making shit up as he goes along? Because it’s hard to tell here. First of all, he’s Jim Harbaugh. He’s the Obama of NFL coaches. Young, flashy, quick riser, can’t shut the fuck up. Of course he’s talking a big game now. Why wouldn’t he? Who the hell is Ray McDonald? Because when I think of the San Francisco 49ers I think of a lot of big names and Ray McDonald isn’t one of them. How hard is it to take a hard line against Ray fucking McDonald for beating his fiancé?

I’ll tell you one thing – he doesn’t come out with this bad ass, zero tolerance coach schtick if it’s Colin Kaepernick, Michael Crabtree, or Navarro Bowman that’s arrested for the same thing. Let’s see how strict his policy is when the 49ers have to choose between making the Super Bowl and going 6-10. Let’s see how outraged their fans are when their best player gets arrested for beating up his girlfriend.

And if Harbaugh is such a badass then how come he let Aldon Smith play a couple days after his one millionth DUI? How come the 49ers lead the NFL in arrests if he runs such a tight ship? How come his brother doesn’t have a problem with having Ray Rice on his team? You smell that? That’s the smell of Harbaugh bullshit. 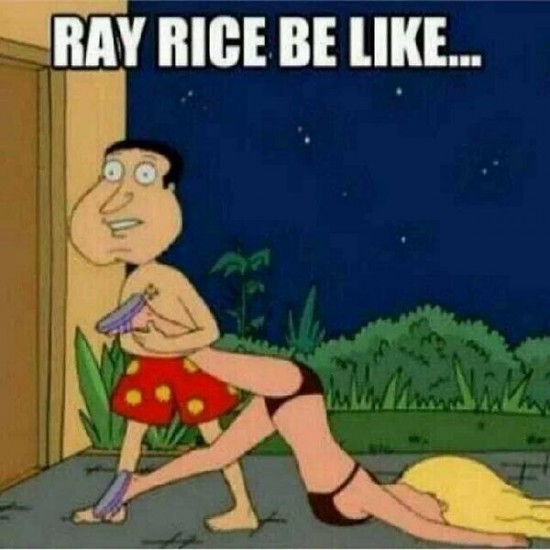 On that note, what the fuck is wrong with all these dudes beating up their wives? What planet are they from? I’m not trying to be Mr. Righteous here, but how the hell does anyone beat the shit out of someone who you supposedly love and can’t defend themselves? And here’s a better question – why are there so God damn many of them? Every time I turn on the TV someone in the NFL is beating the shit out of their pregnant girlfriend. I can understand if one bad apple seeps through the cracks, but how the hell are there this many people in one profession that give zero fucks about knocking around a pregnant woman?

I’ve heard some idiots on talk radio saying that we shouldn’t have a mandatory, one strike and your out policy for domestic abuse because wives/girlfriends will be reluctant to come forward because their child support depends on a steady NFL pay check. Fuck that. And fuck any person who thinks like that. If you wanna get the shit beat out of you so you can keep getting a pay check from baby daddy then that’s on you. Under no circumstances should that argument EVER enter into the discussion on player suspensions. America doesn’t give into bullies and terrorists. Well, unless it’s ISIS.

Like I’ve said before – I get pissed off at Mrs. Turtleboy just like any blue-blooded American man gets pissed at their significant other. I’d recommend these NFL roid heads start doing what I do – the chop. You’re pregnant fiancé is being out of control ridiculous? Give her the chop. Just move your arm from your head down to your side, thus creating the illusion of an imaginary wall with “the chop.” Her words can’t hurt you anymore and you don’t go to prison. It’s a win win for all.

The bottom line is this. The NFL has to decide whether it wants to continue to be a fraudulent, hypocritical joke that makes TONS of cash, OR whether it wants to be an organization that doesn’t stand for dudes who beat the shit out of women and make a TON of cash. Because Turtleboy Sports is a feminist family blog, and we have no tolerance for domestic abuse here. We have a one strike and you’re out policy for our bloggers, and we suggest the NFL do the same. There’s no second chances for smacking your woman around.