I thought I was reading The Onion at first. I mean, “sensitivity training?” All these dudes are gonna get in a room together and talk about their feelz? This is real life? Sadly it’s all too real. This is the state of America right now.

Of course it only got to this point because a handful of WEEI advertisers have abandoned ship after Christian Fauria’s “racist” Don Yee impression. But they didn’t jump ship on their own. People were calling them. Now, we’ve had this happen to us before with boycotters. No one ever leaves when they do it because the people boycotting them, a) weren’t doing business with them in the first place, and b) don’t have influence or an audience to spread their boycott.

So why was this one so effective? Simple – the mainstream media is orchestrating the harassment campaign:

.@MargeauxSippell and I have been listening to @WEEI to track down advertisers — one by one. Here's what happened. https://t.co/zx1i01m6Kj

I shit you not. Shirley Leung, an editor for the Boston Globe, is spending her entire week cold calling WEEI advertisers and asking them why they advertise on the radio station that’s consistently been #1 in the ratings. Think about how insane that is. Boston’s de facto official newspaper is no longer a reporter of the news. They’re full time activists now. They’ve reduced themselves to Internet trolls who take pride in trying to destroy a media outlet simply because they do not agree with the form of entertainment they are providing. Modern journalism is officially dead.

This is coming from a newspaper that harbored a culture of rampant sexual harassment for years, and protected the predominantly white male perpetrators. They wrote a story about it in early December, but they refused to name names. In other words, they were protecting the predators.

Their reason for not naming names? “No one was touched”:

“Quite simply, the transgressions would not meet our standards for a reportable event if they happened at another company,” McGrory’s statement said. “To all our knowledge, nobody was physically touched; no one was persistently harassed; there were no overt threats.”

Because apparently the only way you can sexually harass a woman is by grabbing her ass. That went over like a fart in church.

The @BostonGlobe story on sexual harassment at @BostonGlobe is a travesty. It is so awful that I had to read it twice to make sure it wasn't a parody. This is a case-study that will be studied for years on how NOT to write about yourself if you're a newspaper.

How about the @BostonGlobe cleans up its own issues before launching an all out campaign to call out other media outlets on their issues? Just saying. Glass houses. https://t.co/Kj6iCt382M

So WEEI figured out who one of the offender’s was – longtime Statehouse reporter Jim O’Sullivan – and they put his name out there. Only after doing this did the Globe decide to offer a bullshit apology for not naming his name:

The newspaper’s decision not to identify O’Sullivan earlier was met with criticism. Editor-in-Chief Brian McGrory said Thursday it was a mistake.

“We believed that we were adhering to our journalistic principles, standards on sourcing, and sense of basic fairness. We believed that the misconduct was not at the level of what we had been covering and uncovering in other organizations. We didn’t believe we had definitive proof to name him in a news story,” McGrory wrote. “Time and circumstances in this extraordinary national movement have given us, or at least me, a different perspective.”

In other words, they’re sorry now that their boy has been thrown to the wolves. They tried to cover up for him, it didn’t work, and now they all of a sudden realized they were wrong. You can try to defend this all you want but it’s clear as day – the Boston Globe actively endorses an environment in which men are allowed to degrade women and treat them like meat.

It’s just so funny watching the Globe try to take the moral high ground over anyone. Especially since they still have a column up from Gish Jen, in which she blames Bostonians for the Boston Marathon bomb because we “failed the Tsarnaevs.” According to her, when it came to terrorist #2 Dzokhar Tsarnaev, “

we accepted him, but only up to a point.”

This was referring to a refugee who was given taxpayer funded everything his entire life and intentionally placed a bomb next to a 8 year old. We failed to “accept” this sort of behavior, therefore we are racist.

Back to Shirley, look how much joy she took in this:

Here’s an idea Shirley, if you don’t like what you hear on WEEI (we all know you never actually listen to them anyway) just change the channel. But of course you can’t do that, because you simply will not stand for people who have different views about what is and isn’t offensive. You are a Nazi. This is not hyperbole either. You’re an actual Nazi. This is the first thing Nazis do – book burning. That’s what your campaign is – destroying media that you don’t approve of. “Keeping score.” This is a game to her. She’s literally counting scalps. Once again, this woman’s job is to run a major newspaper. And instead of doing that she’s spending her entire day harassing a competitor.

And no, the reason some advertisers are taking their business elsewhere isn’t because they think WEEI is offensive. They worry about the damage you will do to them by using your influence at the Globe to smear them. They know you’ll toss them in the hate speech pile which could potentially be bad for business. You’re basically using your power to bully them into advertising where you tell them to.

But the purpose of advertising is to be seen. That’s it. It’s not endorsing the views of the program they’re advertising on. When Doritos runs ads during the Super Bowl it doesn’t mean they’re Patriots fans. It just means they want to be seen by the biggest audience possible. This is how marketing works.

The most telling part about her comment is how she says that they don’t want to be associated with “offensive” commentary. Who gets to define offensive? Oh right, Shirley and the Globe do. Do you understand how dangerous that is in a free society? To let certain fringe segments of the population decide what can and cannot be said based on their own oversensitive feelz?

Citizen’s Bank is among the gutless: 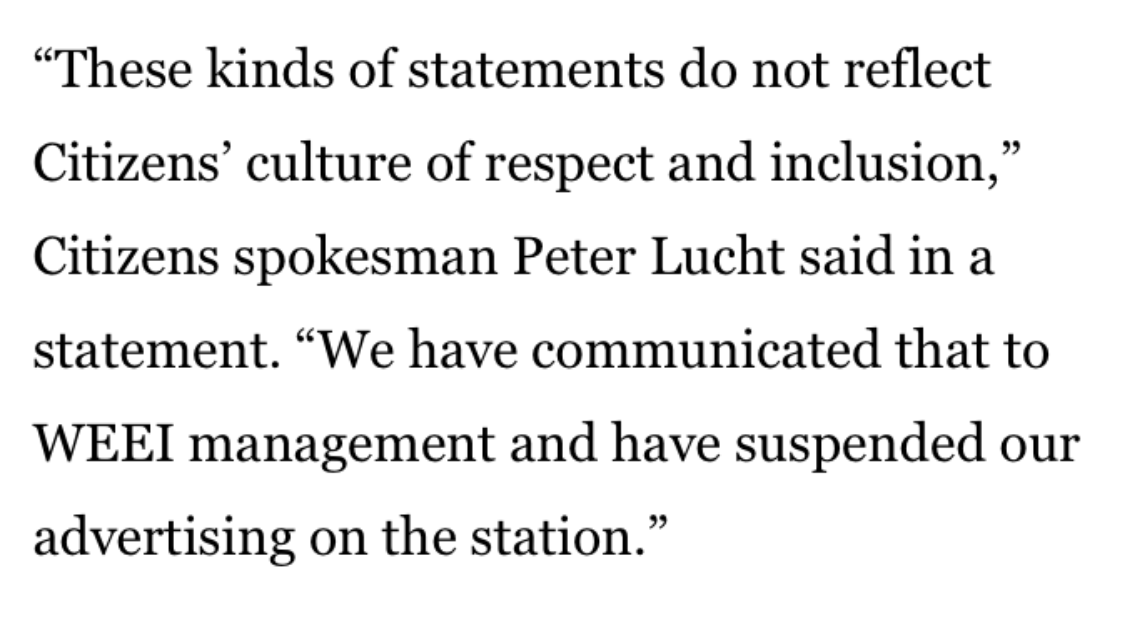 This is Peter Lucht:

Does he look like the kind of guy who would be offended by a Christian Fauria impression of Don Yee? On his Facebook page he shared pictures of himself holding illegal Cuban cigars.

We embargo Cuba because they are a murderous regime that kills and imprisons dissenters. Peter Lucht and Citizen’s Bank are cool with that (because they selfishly want to smoke the cigars of their choice), but they draw the line at Don Yee impressions.

And please, tell me more about your bank cares so much about inclusion and respect. Do you respect the customers your bank shortchanged out of $34.5 million?

How bout Native Americans whose land was being threatened by a pipeline? Because you’re financing that too: Funny, you didn’t have a comment on that controversy. Probably because the Boston Globe wasn’t tying you to hate speech. But we’ll call you out on it.

Oh, and if your company is so “inclusive” the why are you laying off Americans and sending those jobs to India?

Ya know, an impoverished country with a $0.28 minimum wage that pollutes the environment with virtually no regulations whatsoever. “For most of November, Delhi has been blanketed by dense smog. Doctors in the capital declared the crisis a public healthy emergency, while the chief minister, Arvind Kejriwal, called it a “gas chamber.” Since the beginning of the month, average pollution levels in the city have exceeded 10 times the World Health Organization-recommended 24-hour levels. At its worst, pollution levels were nearly 40 times this number.

But pollution is not just a Delhi problem. Indian cities are consistently ranked among Asia’s most polluted, according to WHO. Per the WHO’s 2016 database, 10 of the world’s most polluted cities, in terms of fine particulate matter, are in India.”

Obviously your bank doesn’t give a shit about destroying the environment, killing American jobs, supporting third world dictators, or exploiting low wage brown people. But please, tell me more about why Citizen’s Bank has the moral highground over WEEI because Christian Fauria did a satirical impression.

The bottom line is that two can play that game. The Boston Globe has advertisers too, and I hate to do this to them, but the Globe has declared war on free speech and sometimes there as civilian casualties in war. If they don’t want to get drawn into this then they shouldn’t advertise with a newspaper that plays games like this. One of their biggest advertisers right now is the play “Shear Madness,” which is being performed at the Kennedy Center: Whatever you do, DO NOT go to their Facebook page and leave them a one star review. PLEASE!!! Not good. Luckily for them they do not have reviews set up on their Facebook page, but you can still leave a message on their page.

The bottom line is these people need to be stopped. Someone has to stand up to this bullshit. An assault on free speech cannot go unchallenged in a free society. These people are Nazis. They want to control what we can and can’t listen to, and they don’t get to win. We win. We always win.

BTW – biggest pussy on the Internet right her:

I’m really impressed by this. We’re probably going to switch banks. I wish @easternbank had a branch closer to our house. https://t.co/gzAPZd4OB2