It’s a day of the week so that can only mean one thing – the Boston Globe has found a new way to call something harmless “racist.” Earlier in the week it was award winning journalist Shirley Leung tackling the elephant in the room – white people who like craft beer.

I guess that means the mere existence of Hennessy is racist since it prevents many in the minority community from drinking craft beer.

In a hilarious act of unintentional comedy Shirley tagged a black guy on Twitter, who works in the craft beer industry and was interviewed in the article, thinking he would retweet her or something.

Great talking to @GarrettOliver of @BrooklynBrewery about how craft beer can fix its diversity problem. https://t.co/Y8wZjej3zc

Instead he was like, “bitch that’s not what I said.”

It’s a shame that your editor decided to put it that way. My point was never that there are “too many” of anybody, and I strongly disagree with that sensational headline. My point is that there are not enough other folks. So if we want diversity, it will take some work.

It is a shame that the editor published this indeed. Oh wait, she is the editor. The most remarkable part about this is that people actually pay money for this newspaper to read stories like this. This is what Shirley Leung is doing when she’s not harassing WEEI advertisers and trying to control content on a radio station that frequently criticizes her employer.

Yesterday she decided to get outraged about something else. The Herald recently did a story on Speaker Robert DeLeo spending $5,000 on Chinese food for his fellow state reps who were allegedly burning the midnight oil at work one night. 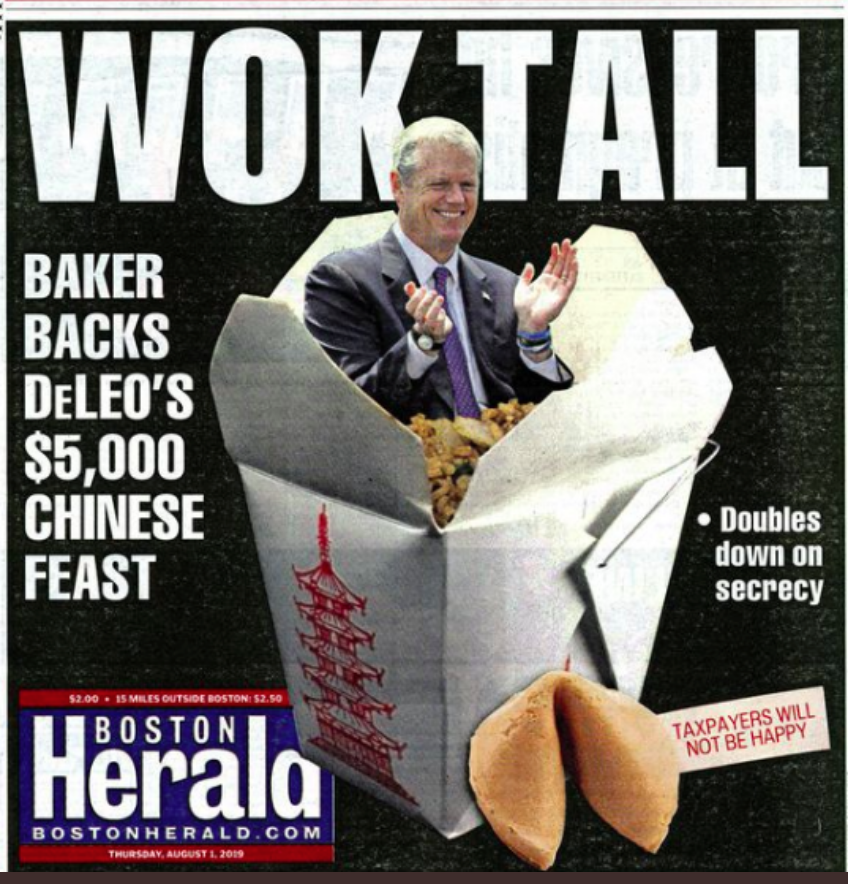 Most normal people when they see a story like this would be appalled that the pigs at the trough can’t buy their own crab raccoon like everyone else. But the Globe has no interest in exposing scummy politicians. Instead Shirley took this angle.

"The Herald front page is highly offensive to Chinese-Americans like me — and it should be to everyone else," the Globe's @Leung writes. https://t.co/N0Z5ECyod4 pic.twitter.com/lAmPQg4Hr4

The world this woman is living in is truly remarkable. I don’t know how they do it, but when you work at the Globe you learn how to make literally anything racist. Tall Deval is in a Chinese food container because they ordered Chinese food. I dunno about her, but when I order Chinese food it comes in one of those containers and always contains a fortune cookie. I don’t even get what Wok Tall is supposed to mean, but he’s tall and a lot of Chinese restaurants have the word Wok in it, so I guess that’s it. Either way, the story is literally about Chinese food and the governor is at the center of it. The mental gymnastics you have to perform to reach the conclusion that this is racist is mind boggling.

This is classic Shirley Leung though. It’s not just that she’s pretending to be offended, she’s also taking shots at a competitor. The Herald is supposed to exist to challenge the Globe’s monopolistic control of the media. The fact that the Globe is calling them out as racist over something that’s clearly not racist, is a business decision more than anything. Next thing you know she’ll be calling their advertisers and urging them to stop supporting this, just like she did with WEEI.

If the Herald had any balls they’d tell her to get fucked. But because the Herald has turned into a sackless relic of what it once was they elected to apologize instead.

The editor he Herald just implied that his media outlet should censor itself based on the feelings of the editor of their biggest competitor. That about sums up the current state of the Herald.

Just for the record, Uncle Fester here isn’t actually sorry. We know this because he still has a tweet up proudly displaying the cover photo. He apologized because he’s a gutless, pandering fool who thinks that this will appease the mob. He’ll find out in short order that Shirley Leung is never satisfied until people start losing their jobs.

As usual, Shirley got ratioed hard. I’ve never been ratioed so I don’t know what that feels like. But Shirley gets ratioed almost every time she posts. You’d think that blowback from both sides of the aisle (tons of liberals call this sort of bullshit out because they know it’s a big reason why they’re stuck with Trump) every time you open your ball washer would make her self reflect and ponder the possibility that perhaps not everything is racist. But then she just does it all over again the next day. I’d say she enjoys getting ratioed, but it’s clear from the fact that she only retweets coworkers who praise her for her wokeness, that she’s well aware of the criticism and thinks that only she and her lackey friends from the Globe can see what’s wrong with this. Some people feel entitled to be racists, or at least blatantly offensive. Case in point here. @leung has it exactly right. https://t.co/R1ljkai6yU

Bruh, that’s some random dude on Twitter. For all we know that’s you. But please, use your blue checkmark to report on the breaking news that random Twitter egg makes Asian joke. This is definitely more newsworthy than writing about the rampant culture of sexual harassment that’s been pervasive for decades at the Globe.

Two politicians who agreed with her were BLT-123 candidate for Congress Brianna Wu.

My God, that is racist.

Who lost miserably in her campaign to primary Steven Lynch in 2018.

The other is City Councilor Michelle Wu who called first dibs on being offended by this. Newsflash – no one was harmed by this. Literally no one. Not even you. You’re just looking for something to be offended by. Asian people are our last line in defense of politically incorrect satire. If we lose them we’re completely fucked. They’re the group who doesn’t have time for this bullshit because they’re too busy killing it in America and sending their kids to the best colleges. This is why people like Shirley Leung and Michelle Wu are even more disgraceful – they don’t speak for the group.

Michelle Wu said that the image was even more racist than it normally would be because of the “politics of division” at play in the country.

In other words, now that Trump is President everything is racist.

In reality Asian people are doing better in this country than any other race of people. Whenever the “wage gap” is shared, showing differences in average pay between men and women of various races, Asian men and women are always excluded. That’s because it would show that they make more money on average than white people, and it would completely destroy the left’s narrative that white men are at the top of the food chain.

Everyone should walk around with a stick up their ass looking for a way to be victimized by satire, because that’s what enlightened people do.

The Globe carries water for liberals, which became even more apparent when Speaker DeLeo chimed in. “I am deeply offended and disgusted by the Herald’s racial and cultural insensitivity.”

No you’re not. You’re just mad that they exposed you for ripping off the taxpayers with all you can eat Lo mein. And ultimately what Michelle Wu and Shirley Leung did by pretending to be offended by this was take the attention off of DeLeo and put it on the Herald. Racism gets clicks, but wasteful government spending is par for the course.