Question – Would you rather UMass completely get their ass kicked, or lose like VCU did last night? We all saw the Minutemen get emasculated yesterday afternoon, but only the diehards stayed up to watch the VCU-Stephen F. Austin debacle. VCU had the game. They were up seven with 56 seconds to go. They led by double digits in the second half. They were up three with just ten seconds to go, and had VCU forward Jordan Burgess on the free throw line with a chance to put it away. Hit em both, and it’s officially game over. Hit one, and it should still be game over. He did the latter.

As the Lumberjacks brought the ball up the court VCU had one thing they simply could not do – foul them on a three point attempt. Unfortunately for them, the unthinkable happened. Here it was:

So yea, JeQuan Lewis just pulled the biggest NCAA Tournament boner since Chris Webber’s infamous timeout call. It simply doesn’t get any worse than that.

But I’m sorry, that wasn’t even close to being a foul. Just a terrible, terrible call. Was it stupid? Oh God yes. Was it a foul? Absolutely not. Stupidity isn’t a foul. 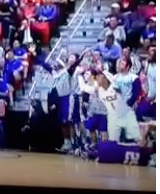 The referee blew the whistle, despite having a PERFECT view of the play. He could clearly see that absolutely no contact was made by Lewis. He goes up for the block, makes no contact, gets his legs kicked out from under him, and then watched the shooter pull the flop. Pathetic.

This loss was another kick in the nuts. I know I shouldn’t, but I really like VCU. They do things the right way. Their coach is the best in the country. They’re extremely fun to watch, and they were the best hope for the Atlantic Ten to prove Coach K wrong. Plus they have this girl:

But they’re gone now, and we’re left with Dayton and St. Louis. FML.

I’d honestly rather lose like we did. I can get over getting our asses kicked by a better coached team. I couldn’t get over a stupid mistake like that, coupled with a horrendous foul call in the final seconds.

Some people have asked whether they’d rather see UMass get blown away in a tournament game like this, or make the NIT Final Four again. I contemplated this, and I’d still take the blowout loss. It sucked, but the Selection Show was a euphoric feeling I will never forget. I just hope I get to see it again next year.

Feel free to share your thoughts to keep the conversion going.