Suspended State Trooper/Pot Dealer Leigha Genduso Has Been Posting On Masscops.com For Years, Shitting On People Who Smoke Weed, Lecturing Female Cops About Being Whores, And So Much More There’s a community forum for police and others to discuss various police related issues called Masscops.com. Take a wild guess who was a regular on there…… Of course!! Everyone’s favorite weed dealing state trooper – Leigha Genduso. And she posted a lot of stuff that will make your head explode. Let’s check some of it out, dating back to 2006. Keep in mind the timeline we are dealing with here.

In 2005 she lied to the grand jury several times about her involvement with her ex-boyfriend’s business.

In 2007 she testified against him and admitted under oath to all the illegal things she had done.

In 2014 she became a Massachusetts State Trooper and got a gig on the K-9 unit. So 2006, which falls in between the testimony and the grand jury perjury, is when she started posting about doing interviews to be a State Police dispatcher. According to her it was a piece of cake. Or in her case, a piece of pot brownie: Although she was excited about the interview, she was bummed when she found out 11 year ago today that she did not get the job: This was shortly before her testimony in which she admitted to a whole bunch of serious crimes. Two years of effort? What had she done during those two years besides testify in front of a courtroom in which state troopers were present, that she sold pot, laundered money, and committed perjury?

She has a few posts like this, in which she snarkily pokes fun at another poster for asking if an arrest as a youthful offender would prevent them from becoming a cop: She ironically posted a link to an article about a jockey who was arrested for cocaine possession. Check out her commentary: “Way to ruin your career for drugs, moron.”

Can’t make this stuff up people. This is a chick who not only got away with selling gigantic quantities of weed, but was given a free pass so long as she didn’t perjure herself. Then she perjured herself and she still didn’t get in trouble. Yet here she is mocking other people for ruining their careers for drugs. Amazing.

In 2009 she was all fired up about civilian flaggers taking details from cops, so she posted a link to a story about a flagger who had been arrested for……. I mean, really? The balls on this chick. She doesn’t want stoned pot dealers acting as flagmen. But she has no problem letting stoned pot dealers have a gun and a badge. We can’t make stuff like this up. Sometimes the blogs just write themselves.

She CONSTANTLY posted links like that, shaming other people who basically did the same thing she did:

She cast judgement on corrections officers (her ex-husband was a CO) when they were arrested for DUI’s: Apparently being a State Trooper was a backup job or a pipe dream, because in 2009 she claimed to be declining positions offered to her from TSA, while still employed as a dispatcher:

She posted a link to an elderly couple that was arrested with 200 pounds of pot, and mocked them for spending their retirement in prison: Only 200 pounds? Rookies. If only that elderly couple was willing to use their experience from working at Centerfolds to bang much older, high ranking members of the state police. Then they’d get jobs paying $151,000 a year and plate readers that none of their coworkers got.

She cast judgement on a Worcester cop who was accused of drug dealing:

She posted about looking for jobs working with ICE or as a federal air marshall:

She bragged about using an AR-15,

just two years after she admitted to breaking a plethora of laws that would’ve put anyone else in federal prison.

This might be the funniest one of the bunch: “Whatever happened to earning your stripes?” – Drug dealing woman who advanced in the MSP over thousands of more qualified applicants simply because she was having sex with a Lt. Colonel and was friends with the former Colonel, Marian McGovern. 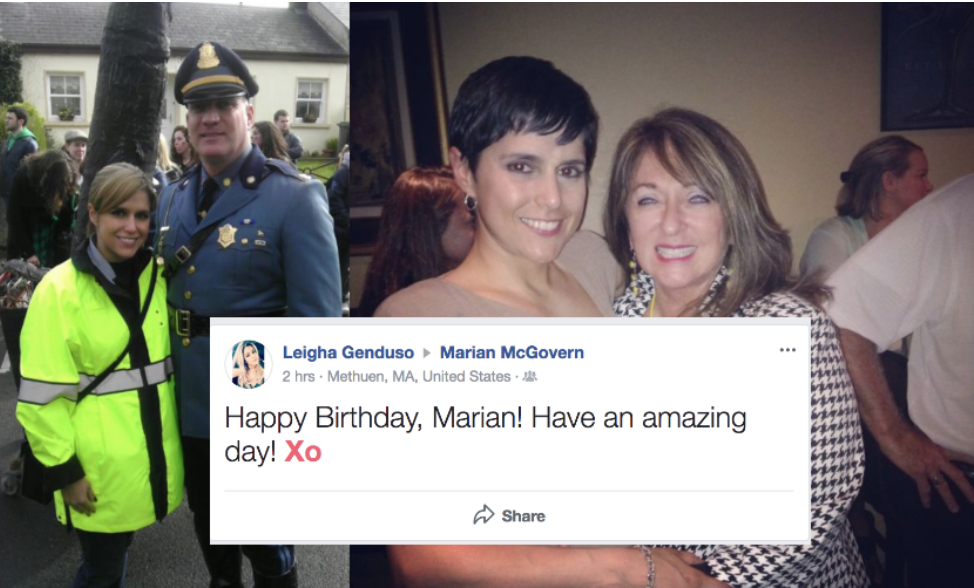 Speaking of….she had some strong opinions about who should be the next MSP Colonel in 2009: The date on this is important because she started banging Risteen in 2010. This proves that her relationship with McGovern goes back at least 10 years, and she knew her first. McGovern had more power than Risteen, since she held a hire rank and seemingly was more well liked. It shows that Genduso was going to bat for McGovern, and the McGovern returned the favor by getting her on the force in 2014. Keep in mind, McGovern was not Colonel for very long, but because she retired as a Colonel she got a bigger pension. A TAX FREE pension due to her heart condition that allows her to participate in CrossFit style boot camps. She apparently had been eyeing the MSP for a while, and she posted a lot about how if you don’t pass the test the first time, just keep on trying anyway:

Up above I said that we found her most hilarious post. I lied. This was better: “I have a sincere problem with women on here who give the rest of us a bad rep by sending PM’s to male posters about sexual comments. HAVE RESPECT ON YOURSELF!!”

“Start seeing the potential bad reputation with all women on Mass Cops due to a few bad eggs.”

– Chick who fucked her way to the top of the pot dealing world, and then graduated to fucking her way into the Massachusetts State Police.

According to her she nearly became a Worcester cop too: Come on Leigha, you’re telling there wasn’t someone in the WPD who needed a grundle tongue bath? Try harder.

Oh, and then there was the time that someone posted about their MySpace page, which allegedly showed them smoking pot. You’ll never guess what Leigha Genduso had to say about that….. The arrogance of this broad knows no bounds.

She wanted former Lt. Governor Timmy “Crash” Murray to replace Deval Patrick, because she was upset that Deval had “hired more pals.” Of course she wanted Murray in there. Murray is a Central Mass guy who she could use her connections with to get things. Deval was a useless carpetbagger.

She posted about how shocked she was that a Boston firefighter had been growing and selling pot: Because back when she was slinging the pot came in a U-Haul truck.

She also had the nerve to tell other people that they were CHEATING if they asked what was on the test to become a dispatcher like herself: Yea, you’re not allowed to ask what’s on the test. If you really want the job then fuck someone in power like she did.

Finally she expressed her dismay that a Springfield firefighter wasn’t immediately terminated after being accused of a serious crime: This story never ends. Every time we get a tip like this my jaw drops. This is the most egregious scandal we’ve ever uncovered. It’s not enough that her ex-bf resigned and collects a pension now. It’s not enough that she be fired. There should be dozens of people who lose their job for this. Because for someone like this to get where she did in life it took a lot of people helping her out. And every single one of them who knew should be held accountable for letting a scumbag like this into the Mass State Police.