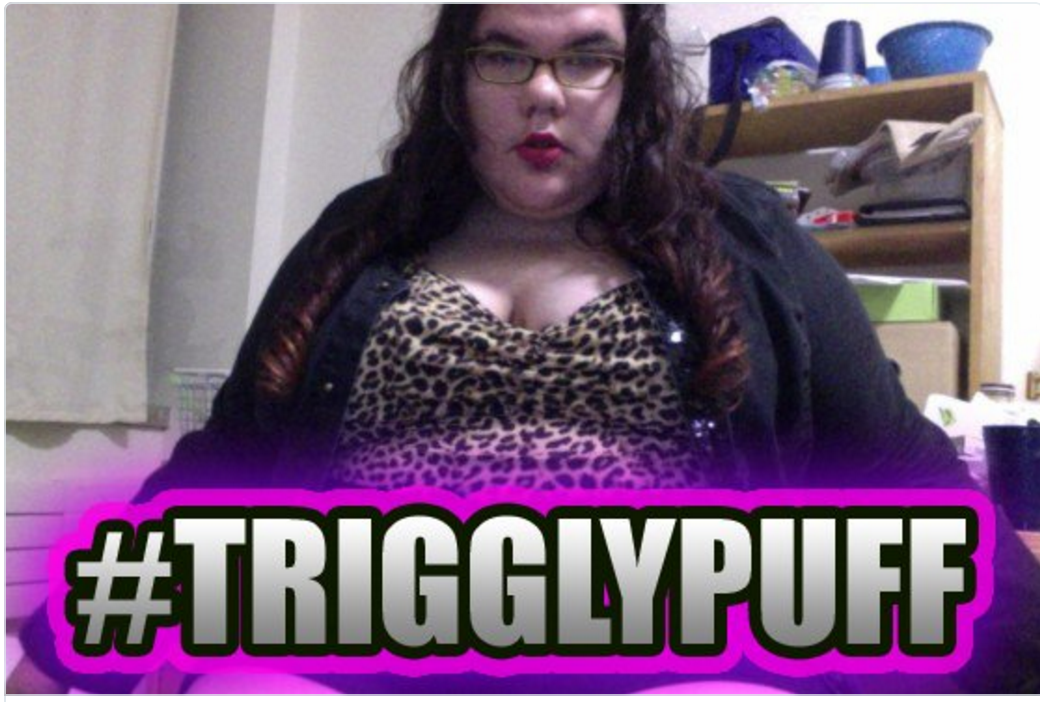 Yesterday we reported that the obnoxious Hampshire College social justice warrior who tried shouting over and swearing at a female speaker at UMass in order to silence her, was named Cora Miriam. Turns out that’s just her Facebook name. Her real name is Cora Segal, and the Internet is having a field day with her:

That video has over 100,000 views and they obviously quoted Turtleboy when they said she should identify as Jabba the Hutt. But that was just fantastically put together. “Fuck you!! Fuck yooooouuuuuuuuu!!!!” Hilarious.

She’s also been given an official name by the Internet – “TrigglyPuff.”

Feeling sorry for #TrigglyPuff. Focus of criticism should be gender studies programs that filled her with rage. https://t.co/LaAffnNeHi

I am #TrigglyPuff hear me roar. down with white males and males and patriarchy I am a empowered fat ass I hate everyone

Yelling take "Your Hate Speech off of Campus" over and over made me tired. For I am #TrigglyPuff hear me snore.

But wait, it gets better. In her Hampshire College bio, here’s how she chose to describe herself:

Cora Segal is an activist originally from Boston, who is currently studying at Hampshire College in Western MA. She was first introduced to social justice through youth-led community-based groups in the Boston area, such as the City School and Sub/Urban Justice. From here, she developed feminist, fat liberation, anti racist, and anti capitalist perspectives, which she believes all play an integral role in working towards collective liberation. As a fatty, she’s very eager to see fat justice and all its intersections with gender, race, disability, queer/trans liberation, class, and anti capitalism, become part of radical movements. She currently organizes with various groups in the Pioneer Valley.

“Fat liberation.” Most of us refer to that as “gym and dieting.” Good God.

Two years ago she hosted a seminar called “Fat Justice and Feminism.” During this seminar, “students were told that President Ronald Reagan “fucked everything up” for fat people, that the Body Mass Index was invented by white supremacists and — for good measure — that communism is superior to capitalism… at least for fat people.”

She also claims that “healthy eating as a far-right, white supremacist tool of oppression.”

And she’s done some public speaking as an anarchist. Speaking in 2013 she said that “body image is intertwined with white supremacy and patriarchy.” She also said that women’s suffragists were bad because they “exacerbated the problem, choosing to portray the movement as one of thin, white educated women and their enemies as fat and physically inferior.” And to top it off she said that “Thin privilege is a real thing.”

Ladies and gentlemen, she is the greatest SJW villain who has ever lived. Everything about her is amazing and I’m so glad that Turtleboy discovered her for the Internet to enjoy. Some butthurts are whining and saying that it serves no purpose to expose her. Wrong. This woman is a terrorist who destroys free speech. She is a mean, miserable human being who yelled “fuck you” and “get the fuck off of campus” to an invited and well respected feminist speaker.

More than anything she represents a nationwide movement that needs to be destroyed. By humiliating her we are sending a clear message to people of her ilk – Turtleboy is watching. The Internet has had enough of your shenanigans and now we are fighting back. We will not allow you to ruin college for everyone. If you choose to be a fascist in public, then you are taking the chance that you could be the next TrigglyPuff.