If you’ve ever lived with a wife/girlfriend/boyfriend/husband then you know that what will be watched on TV can be a contentious issue. In the Turtleboy household it’s one that is grappled with on a daily basis. Turtleboy basically wants to watch reruns of The Office and sports. Maybe I’ll put on NatGeo, or TNT, or TBS, or cruise through the Movie Channels. But religiously I don’t subscribe to any TV shows that aren’t on HBO.

Unfortunately the same cannot be said for Mrs. Turtleboy. We agree on one channel and one channel alone – LMN. Because I cannot get enough of Lifetime movies. They’re fantastic.

But she’s got other programs, some of which I can stomach and others that have no shot. I break them down into the following categories: 1). Can’t be in the same room while they’re on. 2) Borderline unbearable shows. 3) Annoying shows that I can stomach as long as I’m distracted by the internet. 4) Shows I would never go out of my way to watch, but I get into while she’s watching it. 5) Shows I can’t get enough of.

If your significant other watches any of these shows then I’m sure you can relate….

Can’t be in the same room

By far the worst show ever made in the history of television. Absolutely awful. The most recent Bachelor had some idiot named Juan Carlos who banged three of the “contestants” and probably has kids all over America that he doesn’t know about. Yet all of the women still wanted him. Why? He’s a walking venereal disease after all. Oh yea, because this show isn’t about love – it’s about winning.

If I even HEAR ten seconds of this show I feel like my head is about to explode. It’s been established that this show is only to be watched in the bedroom with the door closed. Listening to these idiots all say cliche shit like these quotes:

“I’m the type of guy, you know, my heart is open, it’s in the right spot, and I’m looking for someone that will make my dreams theirs, and their dreams mine.”

“I’ve found that place with you where sometimes nothing needs to be said.”

makes my head wanna explode. Plus who goes on helicopter dates to mountain top resorts? Nothing about these terrible, terrible shows at all resembles reality. 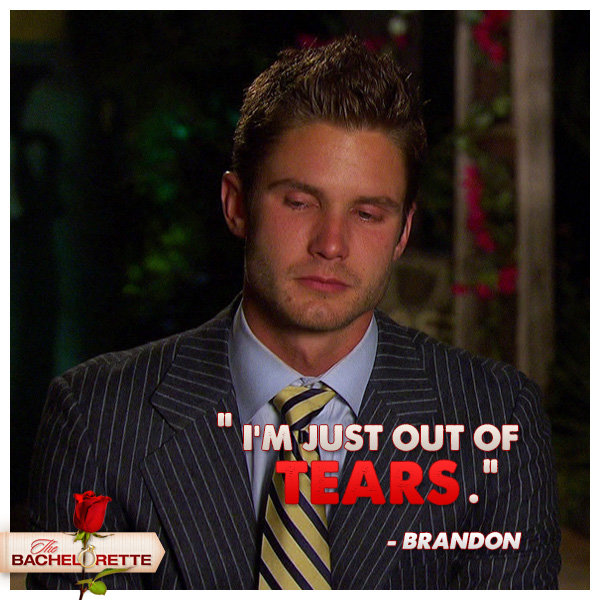 Mrs. Turtleboy doesn’t watch this show thank God. She put it on once and I went bananas and it hasn’t been put on in our house since.

How many different shows are we gonna have in this country that follow around rich white girls who talk about nothing? Why the fuck is this shit on TV. What about this is entertaining? I mean, what planet am I on where listening to Kim Kardashian and her idiot mother discuss plans for Kendall’s birthday party qualifies as entertainment? Newsflash – this family has money because OJ Simpson killed his ex wife. That’s it. Then Kim Kardashian started making pornos and marrying every asshole she came in contact with. The terrorists don’t hate us because of our freedom. They hate us because of this terrible, terrible family. Normally I wouldn’t care, but the really sad part about this is that millions of girls AND women out there watch this show and actually idolize this satanic group of people. I don’t wish death upon anyone, but if all of these worthless idiots went over a cliff I would throw the biggest party you’ve ever seen.

Say Yes to the Dress

Awful. Weddings are the biggest scam in world history. They prey on women too. They know damn well that a wedding is a woman’s big day and women aren’t nearly as frugal as men. What man do you know that would spend thousands of dollars on an outfit they would wear for one fucking day?? That’s insanity. So instead they peddle the expensive shit to women who can’t say no. There is nothing rational about that whatsoever. So of course we have TV shows dedicated to watching caddy women make smug remarks towards their best friends and family members as they try on overpriced pieces of fabric. 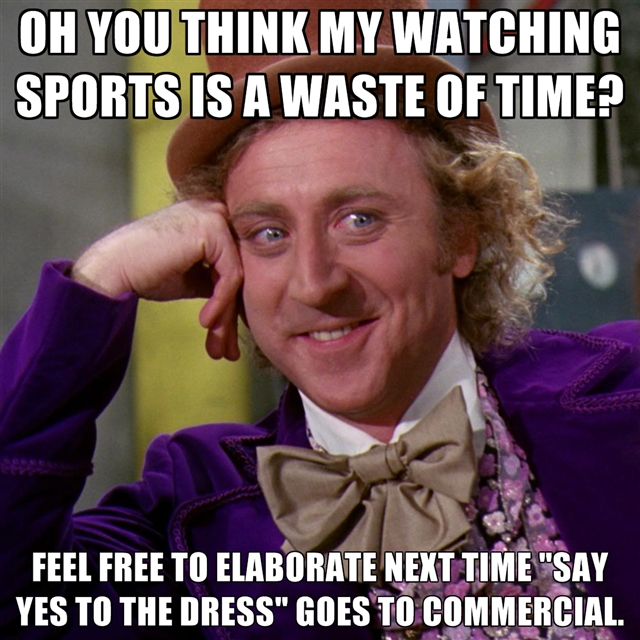 This show drives me nuts for a couple reasons. First of all, what kind of teenagers have this much freedom? How am I supposed to be in the same room while this is going on and not point out how none of it makes any sense. These girls just up and go to New York for the night when they’ve got school the next day.

Secondly, if they’re high school girls then why don’t they just tell an adult instead of trying to solve whatever murder they’re currently tied to? Thirdly, why are they all so hot and mature, and why have they all been the same age every single season? Is this a cartoon? Fourth, is everyone on that show nailing a teacher? Fifth, aren’t there ever any light moments on this show? Don’t high school girls just wanna have fun sometimes? All these girls ever do is hide from someone who’s trying to kill them and try to solve murders on their own. There’s way too much tension in this show because they want you to take it seriously. But how am I supposed to take it seriously when it’s so obviously fake? Oh yea, and how come none of them are ever taking dumps? Real people dump every single day no matter how hot they are. 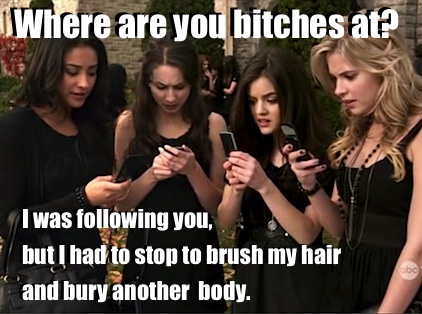 The only good episodes of this show were when Simon used to be on there and crush people’s dreams. Most of the show doesn’t even involve these dingleberries singing, and when they do they’re usually butchering a classic. I don’t wanna watch some white girl sing “A Change is Gonna Come” because she has no fucking clue what that song is about. When they’re not destroying great American songs they’re showing us some really sad story about one of the contestant’s aunts who just had open heart surgery, or just killing air time before they announce which idiot they’re kicking off next.

Oh yea, and the most recent Idol winner looks like a giant pig man:

So You Think You Can Dance

How can anyone watch a show with this woman yelling through the whole thing? What drugs is this person on? Does she like everything? She’s like Paula Abdul on prozac. Make it stop. Please.

The premise of this show is entertaining but the execution is week. It’s got the elements of Jerry Springer, but they try to turn it into feel good, happy ending bullshit. First of all if you’re dumb enough to fall in love with someone you’ve never met in person and is telling you they’re a supermodel online then you deserve to be publicly humiliated. It always ends up being a gigantic fat chick, or some sort of very sexually confused individual. Like, what kind of idiot thinks Bow Wow has online relationships with random girls from Georgia? And how come no one ever wants to kick someone’s ass when they find out they’ve been lied to? Why does everyone end up becoming friends in the end? Plus the ambiguously gay duo who run the show are by definition morons because they’ve already fallen for a Catfish scam.

I can’t watch this show mainly because I wanna punch this dipshit in the face: 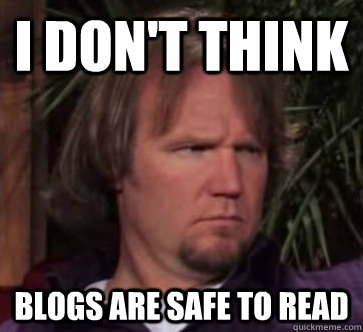 This guy tries to pretend like he’s this really nice guy who loves all his wives. Bullshit. Polygomy is the biggest scam this earth has ever seen. How do these idiot wives not see through this? He just wants to nail all of you guys and he’s hiding behind a bullshit religion that Joseph Smith pulled out of his ass 200 years ago!! And if polygamy is so great then how come it doesn’t work both ways? How come women never get to have five husbands? Oh yea, because you’d call them whores. Turtleboy Sports is a feminist family blog, so naturally we frown on shows like this.

Annoying, But I can stay in the same room as long as I’m on the internet

This show doesn’t drive me insane, but how am I supposed to take this shit seriously? How many God damn cannibals live in this town? Plus, how come every single premonition they’ve ever had on this show turns out to be 100% accurate? Like, they put together these profiles of serial killers based on one small piece of evidence, and BOOM – case solved. Sorry, but I just can’t get into a show where this lady solves murders with the click of a mouse:

First of all, this show is just not entertaining at all. It doesn’t really annoy me, but nothing ever happens. Like, what is entertaining about watching this megafamily go to the aquarium? And why are we glorifying these idiots? Because they’re rich enough to be able to treat the Mom like an incubator? And it takes a special kind of asshole to name 19 children names that begin with the letter “J.” Oh yea, and every time I hear the mother’s voice I want bad things to happen to her. Like, we get it – you’re a perfect Mom. You’ve raised a gaggle of chaste girls in long skirts and strapping young boys who will all get married when they’re 18 instead of going to college.

I used to kind of like this show, but I realized that the part that annoyed me the most were the comments the couples make about the houses. If I hear one more comment about a “man cave” or “granite countertops and stainless steel appliances” or how much they “like to entertain” I am going to throw my TV out the window. Who buys a house with the purpose of entertaining other people? Does every man have to try to sound cool by talking about this man cave? WE KNOW WHAT YOU PLAN ON DOING IN THERE!!! 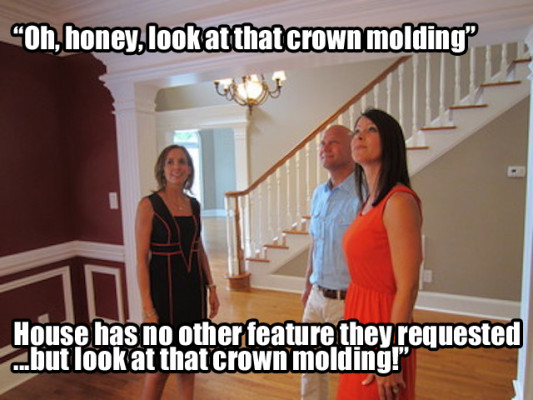 Shows I actually get into

I would never watch this show on my own, but if we have to watch a show together and there aren’t any good Lifetime movies on I usually go with Law and Order SVU. I mean, I’m an HBO guy. Once you’ve watch The Wire, Breaking Bad, True Detective, and The Sopranos you can’t really go back to cable. Just too predictable and cookie cutter. And does Detective Benson ever not get almost raped? Because I don’t think I’ve ever seen an episode where she doesn’t almost get raped.

My one HUGE pet peeve with this show is that when the detectives are questioning people about murders, they NEVER stop what they’re doing. Ever. Like, they’ll go into some flower shop to question the manager about a murder and the guy will just keep working, telling his employees what to do, all while seeming very annoyed that the cops are still there. It’s like HELLO dude!! They’re asking you about a FUCKING murder. Lot of shit on the line here. Why don’t you stop working for one minute and talk to to the God damn police!! 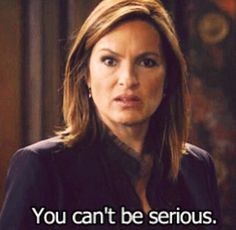 I didn’t think I’d actually like a show that revolves around a rich family from Georgia. Figured it was like a southern version of The Kardashians. But then I heard this man speak for the first time: 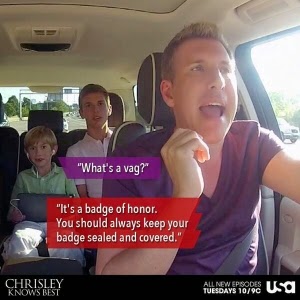