Everyone’s buzzing about this Greta Thunberg, the emotionally abused and extremely angry 16 year old girl who came to America to tell the adults in the United Nations how evil they are while they mindlessly clapped for her. Watch the speech if you haven’t already.

‘You have stolen my dreams and my childhood with your empty words.’ — @GretaThunberg delivered this searing condemnation to world leaders at the UN on the mounting climate crisis pic.twitter.com/yAoYV5XWK8

I would prefer to avoid politics on Turtleboy, but I just really despise everything this girl represents, and I don’t give a shit if she’s 16. The girl is internationally famous and gets to demand things from the UN and Congress, so I’m gonna talk shit about her just like I would to any adult who said the same insane things she said today. If people don’t want kids to be roasted like this then stop putting them on stage and giving them blue checkmarks. Let’s break down her speech and discuss why she is the perfect example of failed western civilization parenting.

“This is all wrong. I shouldn’t be up here. I should be back in school on the other side of the ocean. Yet you all come to us young people for hope. How dare you!

Yes, you are correct about that. You should not be up there, and you should be doing normal kid shit with your friends. Instead your wealthy parents, one of who is an actor, gave you acting lessons as a child, filled you with anger and venom, and taught you how to profit off of it. And no, we do not all come to you for hope. Only a complete moron would look up to a 16 year old for anything.

“You have stolen my dreams and my childhood with your empty words.”

Right again! Your parents and the trained seals clapping for you have stolen your childhood by urging you to be an angry and bitter child constantly worried about doomsday instead of enjoying life. And yet I’m one of the lucky ones. People are suffering. People are dying. Entire ecosystems are collapsing. We are in the beginning of a mass extinction, and all you can talk about is money and fairy tales of eternal economic growth. How dare you!

You stupid adults and your “money.” Don’t you know that money is meaningless? Fuck you and give me my allowance because I wanna go to America! But instead of taking a plane I’m gonna borrow a yacht from the Monaco royal family (to save the planet), then pay some guys to fly to America in a plane and bring it back. I’ll figure out how I’m getting home later. Maybe a canoe.

“For more than 30 years, the science has been crystal clear. How dare you continue to look away and come here saying that you’re doing enough, when the politics and solutions needed are still nowhere in sight. You say you hear us and that you understand the urgency. But no matter how sad and angry I am, I do not want to believe that. Because if you really understood the situation and still kept on failing to act, then you would be evil. And that I refuse to believe.

Honey, the science is as crystal clear as the math. China emits more carbon into the atmosphere than the United States and the EU nations COMBINED!! Guess who’s not paying attention to a word you’re saying? The Red Chinese. Guess who is? The countries that have already gotten rid of straws and plastic bags.

“You are failing us. But the young people are starting to understand your betrayal. The eyes of all future generations are upon you. And if you choose to fail us, I say: We will never forgive you. We will not let you get away with this. Right here, right now is where we draw the line. The world is waking up. And change is coming, whether you like it or not.”

These kids are gonna be so mad when they grow up and 12 years from now everything is fine. Imagine having your childhood stolen from you by a bunch of douchebag adults? If you think they’re angry now, wait until they turn 30 and realize that the most carefree part of their lives were stolen from them. 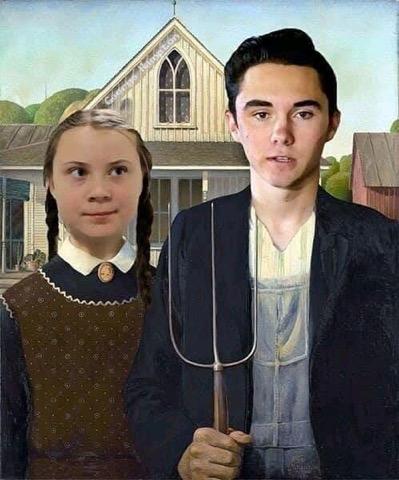 Here’s my question – if climate change is this important of an issue, then why are we being lectured about it by children and AOC? Did they run out of scientists? Because this appears to be nothing more than a deranged cult and/or religion. Not one of those fun religions with the all black choir either. The kind of religion that makes girls wear skirts down to their ankles and all the boys are named Jebediah. These simple minded fucklestains are dead serious about not reproducing because they genuinely believe it’s cruel to bring a child into the most healthy and prosperous nation that has ever existed on the face of the planet.

Climate protester tells the crowd he broke down crying in his car two months ago because he realized he couldn't brings kids into this world until climate change is solved. pic.twitter.com/SniFWCwcjn

You only believe something like that if you are in a cult. Climate activists are cultists.

What adults should be telling kids like Greta is that they’re not going to die in 12 years. Instead we get this.

Greta Thunberg is a supernova. Adults can either help facilitate her ascendance or get the hell out of the way. She will not be stopped.

and then this from the mainstream media (ABC).

On Twitter today: a very large number of adult men all over the world – cyberbullying a 16 year old girl with autism.

Yea, cyberbullying kids is the worst! Good thing your team has never done anything like that. Except Greta Thunberg is testifying in front of the UN and shitting on adults. Nick Sandmann was just standing there minding his own business. Don’t worry though, we totally take you people seriously.