Top 7 Reasons Watching The Masters And Golf In General, Is So Terrible So as I’m writing this I’m watching The Masters, because it’s what’s on TV. All week long I’ve heard people talk about it on Sports Talk Radio. But why? Why do we watch this horrible, horrible game? I would rather watch the following over golf: long distance running, swimming, figure skating, bowling, curling, poker, NL baseball, and ballet. The only thing that golf is less terrible than is NASCAR. Obviously NASCAR is just what we feed the rednecks so they don’t declare Civil War every fifty years.

Here’s the Top Seven reasons that Golf is so unwatchable:

7) There’s no obstacles. Sand traps don’t count. There should be moving obstacles and wild animals eating grass on the fairways. Golf would be a million times more watchable if your shot could get rejected by a herd of goats. Instead it’s a sport where you can be fat and slow and still do well. There’s a reason that Josh Beckett and the other fat asses from the 2011 Red Sox spent so much time golfing – it’s a leisurely day of doing nothing and avoiding physical activity.

6) Nobody ever roots AGAINST golfers. Sports need good guys and bad guys. A home team and a visitor. In golf, everyone cheers for everyone, and that’s just moronic. When Jason Duffner misses a 15 foot putt for par, I wanna see a group of people cheering. When a golfer misses a shot, everyone just collectively says “ooooooooohhh.” When a golfer hits a big shot I wanna see him run over to the haters and rub his polo in their face. And then I wanna see them boo the crap out of him and then throw their beers at him.

5) When they drive the ball, I have no idea where it went, but everyone cheers automatically. In every other sport you know right away what’s good and what’s bad. In baseball it’s obvious when solid contact is made, or if the ball is going to go over the fence. In basketball, the split second you wait while a three point shot hangs in the air is one of the most gut wrenching moments possible, but you know right away whether it has a shot. In hockey you can see the back of the net move and the light go off. In football, you know instantly whether or not the receiver is going to catch the ball. In golf you just sit there and watch a small object disappear down a fairway, until another camera shows it rolling along and everyone claps. Awesome. 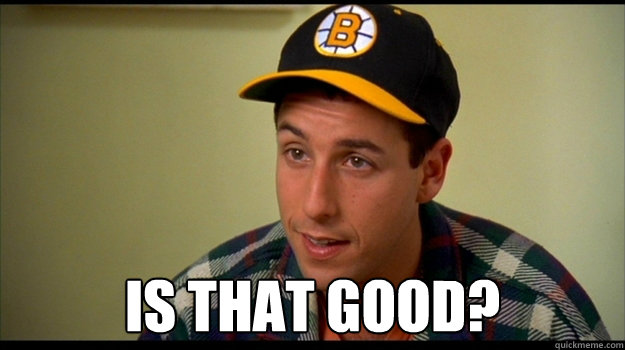 4) The announcers sound like an old guy who is trying to tell you a story but keeps going off on a tangent. The art of delivering a story is more important than the story itself. Your grandfather might’ve fought in World War 2, and he’s probably got a lot of really cool shit to tell you. He just can’t get to the point without telling you about his date with Ethel at the Woolworth’s diner. Or was it Beverly? Hmmmmm. It was right after Korea, so it was probably Ethel. Yes, definitely Ethel. Now Beverly used to live nearby, but she had to move because she went to secretarial school and had to move to Milwaukee. Or was it Peoria? Gee ya know, I just can’t remember. Now what were we talking about?

3) The fact that silence is required during shots makes golf unwatchable. Seriously, what kind of professional requires silence to do their job? Name any other sport where that happens. Sure you can cheer when the ball is in the air, but where’s the fun in that? You’re just cheering on an intimate object. Gravity is doing all the work. The bottom line is that if you can’t do your job with a bunch of drunkards yelling obscenities about your sister, then you shouldn’t be on TV and you certainly shouldn’t be a millionaire. 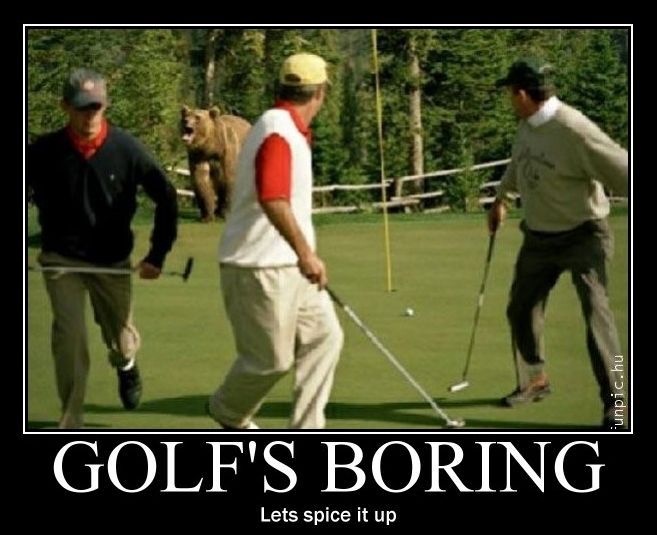 2) Most of the time, they’re not doing anything. Imagine if we watched Kobe Bryant lining up a shot for 45 seconds before finally shooting it. That’s what golf is every single shot. I would much rather watch paint dry than watch some idiot in dockers stare at the line between the ball and the hole he is attempting to put the ball in. And after all that anticipation, the climax is watching him gently tape a small ball as it slowly edges its way towards said hole. Riveting stuff. 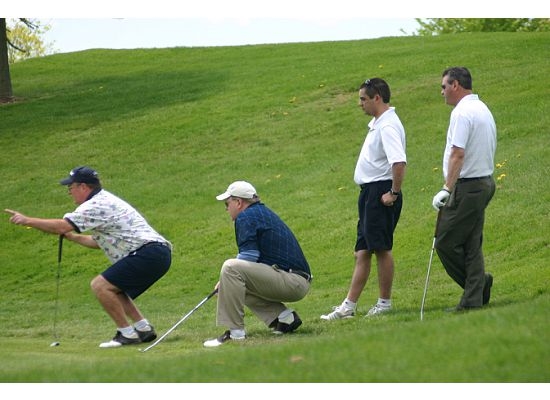 1) Who the hell is winning? I get that they follow the leaders around for the most part on Sunday, but I never know what’s good and what’s bad. So he smashed the ball down the fairway? Is that supposed to be good? Can’t they all do that? They constantly jump around from golfer to golfer, watching them hit shot after shot. And when a player screws up we have to add numbers to a negative number to figure out their score. But at the same time, are there other golfers who aren’t on TV who are shooting well enough to get closer to the leaders? If someone is 5 shots back going into the final day you hardly see them on TV at all. But if they come back, it’s a historic accomplishment. Too bad you don’t get to see any of it on TV.

So yea, those are just my thoughts. I understand a lot of people like watching golf, or else it wouldn’t be on. I’ve played golf a million times before, and I always hated it. It costs too much money to get good at, and it takes up way too much time. I felt like it was something I was SUPPOSED to do because I am white and male. I’ve reached a point in life where I can stop pretending to like things that everyone else in my demographic seems to enjoy. This is one of them. Golf is truly terrible.